Both are available on Qobuz at 24/192 for the same price but the 2019 Remix has some additional tracks. The word ‘remix’ puts me off. 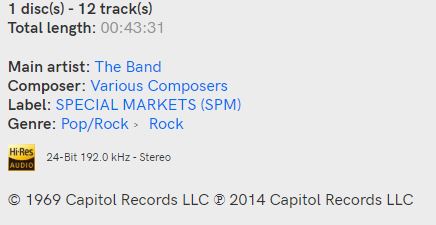 Hi I didn’t like the remasters over the originals, lost it’s vibe, the new remix I haven’t heard yet might be interesting if it’s anything like the Dylan mixes of Blood on tracks from last record store day.

There is also a 2000 Remaster available although only in 16/44.1 There doesn’t appear to be an ‘original’ version available for download. I guess an early CD might have it. I suppose one could listen if one took out a trial subscription but the only option for me would be to listen on a PC albeit with a good external DAC and headphones. I just thought tnere might be a consensus opinion.

I think I have most of the versions mentioned, including my original vinyl and CD, It’s better to google the info as Qobuz/Roon only give you part of the picture. The latest 2019 mix I think is excellent, think along the lines of the Beatles anniversary mixes, a bit more laid back/detailed, not as in your face as the original remaster. Also it comes in a few formats with the 36 track version containing a CD of their Woodstock performance.
Would recommend both but the latest release just edges it for me.

Slightly off topic but I’ve been listening to some of the latter albums from The Band which quite rightly are overshadowed by the earlier releases.

Before Christmas I downloaded the complete Academy of Music live recordings.

Loved Cahoots and Moondog Matinee, though Northern Lights was a bit of a drop-off I thought. Saw them at Wembley (the CSN&Y, Joni Mitchell gig) in '74 and they were magnificent - Chest Fever was just awesome.