I thought this was good. Andrew Milton, over on Parlogram’s Youtube channel discusses, compares and ranks the best sounding versions of Abbey Road. Surprising that the MOFI vinyl issue gets a bit of a spanking “Musak to my ears”. No prizes for guessing that the first UK pressing is a gem…

Well worth a watch over a coffee break… 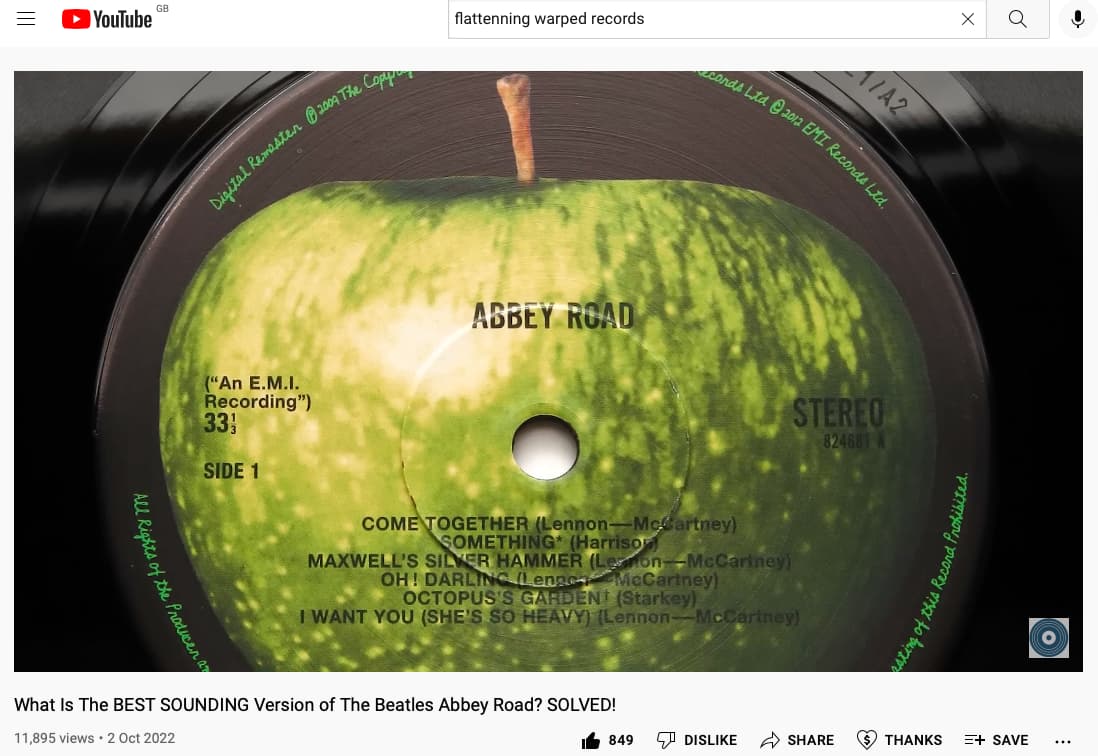 I have a version I bought 3 years ago and then bought the anniversary version which is no match. The same goes for Sgt Peppers too. And Abbey Road. Somehow these newer versions introduced a thick bass line which was not their late 60s and 70s pressings I still have.

I also have an early 1970s copy and this sounds very good indeed, although I do like the recent Giles Martin refresh. It’s a good alternative to trying to find a tidy original first pressing - witness Andrew’s observation at the end of his YouTube video!

My hi res deluxe copy is definitely the best of 4 versions I have, it just comes together. Bass is tight and meaningful vocals are how I think they should have always sounded. It’s such a great album.

Ah, that’s interesting, as I’ve got the recent GM versions on vinyl & CD only, so I wonder if the high-res downloads are that much better than the CDs - anyone know?

No I don’t either but I can tell you it street’s ahead of the CDs I have. It’s one of the best sounding albums I own.

Pete, is yours a Qobuz download? if so what Bit / specs etc? Will look on HD Tracks or High Res Audio websites later.

Forgot (just checked), I do have the high res version of the recent GM Sgt Pepper’s remix, and on vinyl too, but not the CD which is the issue for comparing digital copies.

Thanks Peter - will have a nosey on their site during a coffee break later.

Jumped through the video and thought he talks rubbish. The MFSL Abbey Rd is superb for a start.

Why do people re-post other people’s opinions just because they’ve made a video? It’s like it’s a more official opinion. Who is he? Who cares?

I have a friend who owns a business his Dad built. He has loads of money and spends it on his hobby photography. He knows nothing about photography, not very good and more to the point, knows nothing about the technical aspects of lenses and cameras. However, this doesn’t stop him writing blogs, reviews & videos online about lens quality, etc and guess what? everyone laps it up. He even writes in magazines. It absolutely amazes me. He puts effort into it, but talks rubbish.

Rant over. Thanks for reading my blog.

I agree and I like the newer versions as I hear different things. The box set of Let it Be gives some insight. I only have the vinyl versions of Abbey Road. But one thing that jumps out between older Beatles pressings and newer ones is the amount of percussion. The older seem to have more symbol and drum in them. Whom am I to say what is better no one.

@Count.d If the MOFI version works for you, then great. As he mentions in the video, it is down to personal preference with regard to the sound of their remaster. Clearly it didn’t work for him.

My knowledge is quite limited with regards to which Beatles vinyl records sound the best, as I started out buying 80s vinyl, so they are my reference point. Therefore, I’m more than happy to defer to his (or other) expertise, which, according to his website covers twenty plus years specialising in Beatles records. Good enough for me.

Photography side career? If you feel so passionately, perhaps you should air your frustrations directly to the people concerned and offer to advise them with your own expertise, I’m sure they’d benefit if you have a lot of knowledge and experience in that area.

@Nichols.paul2 Agree, the balance to being objective and subjective on something like this is tricky. For me, the 70s issue definitely sounds punchier and clearer, but it is let down by surface noise (despite cleaning), whereas the latest pressing is very good quality. Interesting, hadn’t picked up on the percussion emphasis, will listen out for that when I next give them a spin.

According to his expertise? Why, what does he play them on? Sums him up, when he shows a graph. Oh dear me.

I don’t feel passionately about such drivel subjects thanks. Just an observation.

What I don’t like is a whole tread dedicated to someone’s opinion, because they’ve done videos. I’ve learnt to ignore such threads, but there are exceptions.

Clearly the thread has upset you. Apologies if this is the case, as it certainly wasn’t my intention to upset forum members.

I found the video interesting and thought other Beatles vinyl owners and collectors may also find it informative. Obviously, we’ll just have to agree to disagree on this.

Enjoy your Beatles collection, whichever format or pressing variant you prefer - that’s what’s all about in the end. 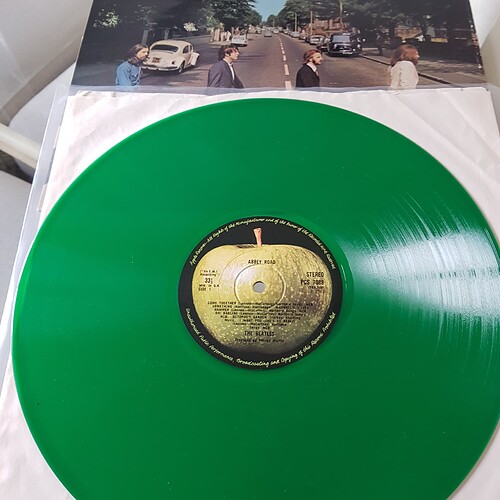 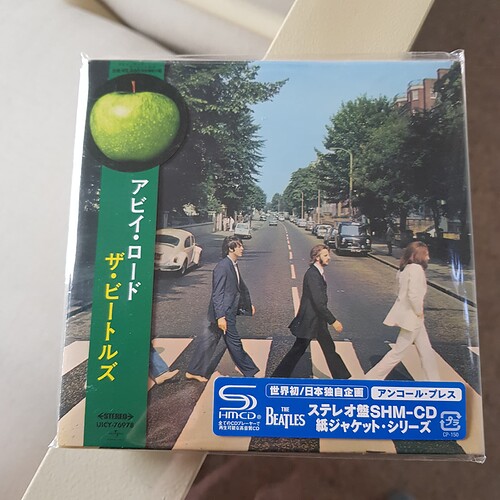 The best version of the remix that I own has to be Blu-ray disc that is included in the box set.
Of course, these are my personal preferences and taken as such, as we know, Abbey Road is a fine sounding album. 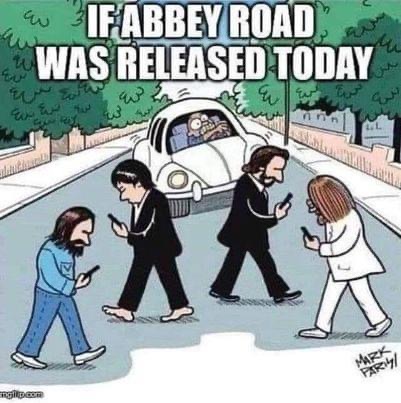 The album, being the last recorded by the Beatles, concluded appropriately with a track entitled The End. However, after an extended pause we have the beautiful little ditty, Her Majesty, from Paul. I have long wondered about its inclusion and, more so, how it ends. The ending is left hanging on an open A, which would naturally resolve to D, but it doesn’t. Was this intentional? Is he saying this is not the end, but there’s more to come? Or was it just a bad edit?

Could just have been the drugs.

I’ve always liked the ending, and up till a few weeks ago it was timeless with the same Queen that kept it relevant. 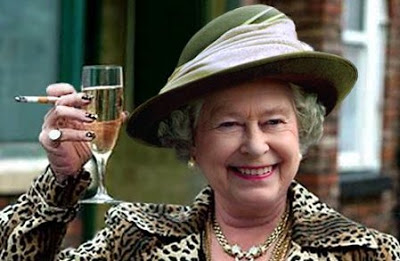 THE STORY BEHIND THE SONG: «Her Majesty» by The Beatles - Rocking In the...

The final track on the final album recorded by The Beatles was a secret inclusion. We look closer at Paul McCartney's tribute to Her Majesty.