A fascinating thought. Lots of ‘Papa’ Haydn, obviously, but I wonder if he would have gone for earlier masters such as Palestrina, Vivaldi and others. (And he, rather infamously as a young man, wrote down from memory the Vatican’s treasured text which had never been heard outside the building*.) He would probably have treasured the Hildegard of Bingen ‘A Feather On The Breath Of God’ disc, if Hyperion had been able to get a copy into his hands.

I reckon that Mozart would have revered an LP12

LP 12 definitely, BUT would he have been a Naimite

…and what would he have thought of Wagner?!

Mozart said that Handel understands effect better than any of us. He purchased as many scores of Handel as he could. Out of interest Beethoven said Handel was the greatest composer whoever lived and Bach said if he was was to meet one person before he died it would be Handel and if he could have been anyone other than himself it would have been Handel. Case Closed!!

There was a case?!

Who brought it? What was the sentence?

There was a plagiarism affair. Mozart got away, he had better lawers apparently. All the prosecution could bring was Clementi’s Sonata B flat Op 24 Allegro con Brio.

This is another reason why I have this hobby. Outstanding 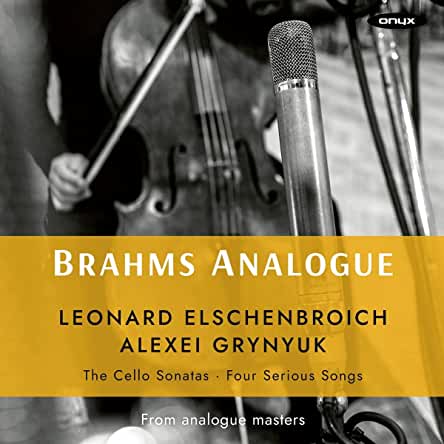 Elschenbroich’s Brahms is good enough to earn its place without the analogue gimmick - this may be the first ADD CD since 40 years. The recorded sound is a bit peculiar, almost like an ‘analogue’ instagram filter was applied.

@graham55 may I call upon your Wagner knowledge to recommend a version of Tannhäuser that I can stream from Qobuz.
I heard the overture on Classic FM earlier whilst driving and was enthralled by the piece. I would be interested to hear a widely acclaimed version for my first full listen.
Thank you, Simon

Hello, Simon. I realise, on reading your post, that I don’t actually have a recording of this opera at home. It’s not a piece that I know, although something that I should get hold of. In that event, I would opt for Solti’s Vienna PO recording, part of the famous series of Wagner operas that Solti recorded in Vienna under John Culshaw for Decca. It has René Kollo and Christa Ludwig as leads.

So I imagine that it will be up to the extraordinarily high standards of recording and production of the others in that series of recordings. But, as I say, it’s not a piece or recording that I know.

Thank you, I have found the recording and will give it a listen soon.
I’ll let you know what I think…

I was pleased to read that you managed to make a short visit home recently. Hopefully this is an ‘Omen’ for a future Parole

Thank you, Simon, that’s kind. I appear to be inching towards some court hearing, bur all is as clear as mud (and I was a practising lawyer, for goodness sake). So the best that I can do (only thing actually) is to keep my fingers crossed.

Every man deserves his day in court Graham.
As far as I can tell, you deserve to be ‘Prosecutor’!
Just put that Tannhäuser on by the way

I don’t want a day in court, Simon. I just want to go home.

I have just had a blazing shouting match with one of the management team, who came into my room a few minutes ago. If ever I get out, I really would like to come back one last time, just to burn the place down. (Not wise, I suppose, to lay a trail of evidence!)

It seems that you are not afforded much privacy in this place.
Here’s hoping the end of your ordeal is close at hand…

Privacy??? That must be your idea of a (not very funny) joke!

There’s a lock on the door, which keeps out other (seriously deranged) inmates who might want to intrude, but all staff carry a key and enter as they please.

On a brighter note, the Tannhauser is very good indeed. You were spot on with it probably being a good version.

If by ‘carers’ you mean the BUPA tuncs who run this horrible place where I am being imprisoned, there is very little care and a lot of greed for getting their grubby little paws on the £1,400 per week that is being filched from my bank account by my son and BUPA. Despite my protests to my bank, I can do nothing to stop it.