The Haircut That Time Forgot

I am rather bored, so I’m watching the 1979 FA Cup Final between the Arse and ManUre on ITV4. The collection of mullets on display has to be seen to be believed.

With all that hair, those chaps must have had incredibly strong neck muscles to stop their heads lolling against their shoulders. I could think of a few rock groups who fell for the style as well - some even contriving to marry their mullets with male pattern baldness: Status Quo were exemplary in this respect!

Interesting to see Terry Neill as Arsenal manager. When he gave up football management, he opened a sports bar on Holborn Viaduct in the City of London just opposite my law firm’s offices, and I got to know him very well. He was a lovely man, and modest despite his accomplishments. I hadn’t seen him since I gave up work over 20 years ago, but I was sad to read of his death a few months ago.

From the BBC site today:

“The mullet hairstyle has seen a global resurgence - but many in Australia claim it as a cultural icon.
The BBC asks locals why it’s such an enduring obsession.” 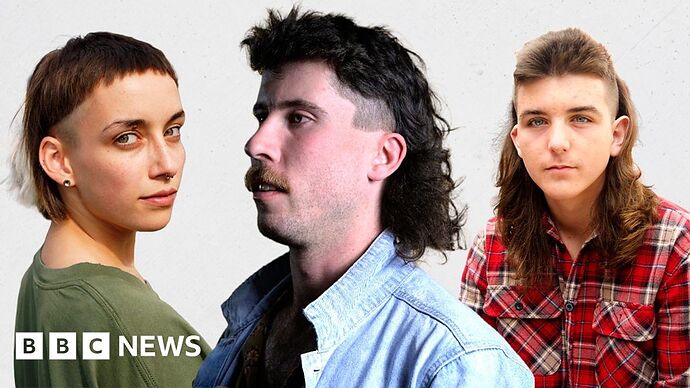 Why do Australians love the mullet?

"Other countries try it but it's not the same," argues one local - the hairstyle is a national icon.

Thank you, Christopher. Interesting that this news should come out on a day when it has also been reported that vinyl has outstripped the CD in global sales for the first time since CDs took over in the 1980s.

I imagine that there are mulleted individuals sitting in bedrooms all over the country listening to LPs on Rega Planar 2s that they inherited from their skinheaded parents.

Yes, Ian, now that I think about it, the archetypal Aussie Paul Hogan sported a particularly fine mullet (if that’s not a contradiction in terms) as Mick in his wonderful Crocodile Dundee films.

Because the cost performance and use cases are great.

Business in the front. Party in the back.

I have no idea what that means, other perhaps than a harbinger of incipient madness.

I crossed that threshold such a long time ago.

I recall the Mullet being big in Germany back I the day, and I also have pictures of my brother sporting one in the U.K. at around the same time. Some form of colour highlighting was also obligatory from what I can tell!

Continues to irritate me that fans of my club and the meehah bang on about our win over Arsenal in 92. We played them at home in the cup in the sequence which led them to the above cup final and, whilst we lost 1-3, overall we were the better team and performed far better than the 92 game. Jennings haircut was a bewildering thing and it was immensely satisfying seeing him drop the ball into his own net that but… so,e of the other haircuts. Another world.

I’m fairly sure I had an inadvertent mullet at about age 12 when I left it a bit long between haircuts. Since it was the mid-80s, there doesn’t seem to be any photographic evidence to prove it.

Another reason I’m glad I grew up before the internet age.

8 out of 10 kids here do seem to have a mullet haircut in some form or another, it was just consider a “bogan” things years ago.

It is surely not possible to acquire a mullet ‘inadvertently’, unless you are claiming that aliens abducted you and subjected you to a haircut!!!

I’m as bald as a bagger, I’d love to wake up one morning and discover I’ve grown a mullet.

Home made haircuts by my Mum where the order of the day in my house in the 70’s.

You just need to be careful where the mullet grows!

Home made haircuts by my Mum where the order of the day in my house in the 70’s.

I often cut my own hair with clippers as I hate waiting around at the barbershop and having the kind of hair that goes haywire inevitably means short.

I was awake early today and decided I needed a trim.

As soon as I took the first cut down the middle of my forehead I realised I had the wrong ‘comb’ on the clipper, so it was a #1 all over and I apparently look like a thug.

I always tend to miss bits at the back that I can’t see so probably provided some amusement at the gym this morning.

I apparently need to give my eyebrows some attention by Mrs AC’s recation when she got home - when did that malarkey start at the barbers?

Probably easy to forget how our own hairstyles varied in our younger days as I certainly had some ludicrous cuts. Generally short is boring but safe for me.

Of course, the hair on our heads (assuming that we still have any) is the only thing about our outward appearance that we can change easily.

But human beings are unreliable creatures, and so will sometimes get things wrong - occasionally with ludicrously funny results.

I will merely say ‘Showaddywaddy’, and rest my case. But feel free to substitute you own favourite glam rock artists.

The best mullets had the top bit permed.