The limits of shop dems

First off, I know there is no substitute for listening over an extended period at home. However there are many reasons why that is not always possible. I recently saw a reasonable deal for a pre loved Radikal. The dealer was about 90 miles away so just about doable for a day trip. As my Dynavector XX2 is now about 4 years old it seemed like a logical time to think about getting a replacement for that at the same time. After a few calls to discuss options I decided to give the Linn Kandid a listen. However to do that I would have to hear it at the dealer meaning it wouldn’t be in my own system or room. Both significant factors, but I felt I had to at least hear it even under those circumstances before committing that kind of money. Taking along a small selection of my own Vinyl I set out. Dem system was Radikal LP12, Urika, 252, 500, ATC40. 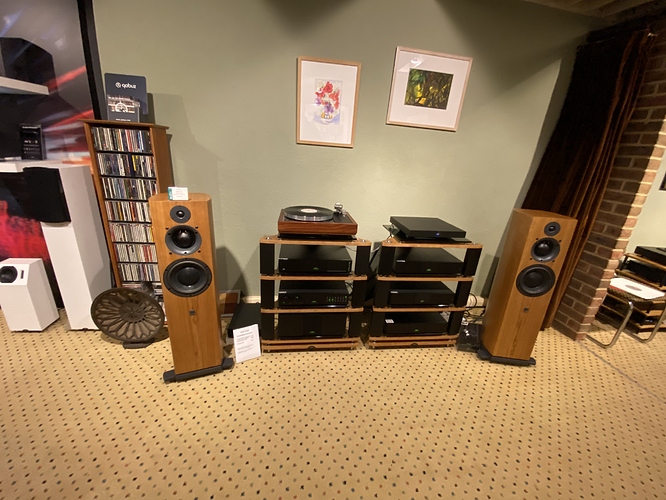 My system is active Isobariks with NAP250DRs and Superline/Supercap phono stage. Very different. So how did it compare? I expected more from a system with Radikal LP12 and Nap500. Yes, the emotion, detail and control was there in abundance. But the loss of scale and speed was surprising. Maybe in retrospect it shouldn’t be. The ATC40 is clearly a very good speaker but it’s also not in the same league as the active Isobarik. The 500 couldn’t make up for that. Now back at home I’m listening again to the new Rise album. The sense of scale is wonderful. Going to revisit some of this afternoon’s demo tracks next to see if I made the right decision.

Which was…Yes, Radikal, Keel and Kandid are on order. Despite the less than ideal demo situation I’m sure the upgrade will deliver even more in my own system. Pray to god I’m not kidding myself.

I would think that a tt power supply or a cartridge would be impossible to “audition” outside of your own system. The best thing you could do is do an a vs. b comparison. Kandid vs . . . your bent DV? Going to hear what a cartridge sounds like, in a room that’s not yours, in a system that’s not yours . . . seems destined to reveal nothing useful. But I’m glad it worked out once you got home!

I think you’re experiencing the reality most people outside the UK have to live with. I know many people emphatically state they’d never buy anything not tried at home.

Well that’s just impossible for the majority of people. Lots of countries are just too big for dealers to agree to that and lots just flat don’t have a culture of lending kit to anyone. Taken to extremes, there are countries where even high end dealers have no dem room. There, the customer buys every single item on a punt and swaps boxes often. Home trial = buy it and sell it if you don’t like it. I live in such a country.

So yes, there are limits to dealer demonstrations but it’s not the end of the world. Live dangerously like us; the other 90%

I think the best thing to do in such circumstances is to have tge bemo with as much as possible of your own system, taking with you whatever the dealer doesn’t have available to demo with. I’ve done this now several times, lugging my previous speakers, rather large and heavy IMF RSPM speakers and for a demo of CD player and demo of amp, and both speakers and amp for demos of speakers - the speakers in that circumstance being to give a reference point in the demo rooms, against which to compare the speakers being heard.

No dealer has batted an eyelid with me appearing with a pair of 50-60Kg speakers and 23Kg amp, declining my own assistance to their staff carrying them in, even upstairs. And I have never been disappointed with whatever I have purchased through such demos.

The other thing I have done is had on sale or return by post, though with me responsible for the return cost (which can be high if you live overseas, especially if the item is heave or has high insurance value - or both).

Completely agree with this…particularly with respect to cartridges, as a decent audition with your own TT at home is somewhat difficult. This is where your dealer’s recommendation or manufacturer’s product co-development are useful. I went for the P10 plus Apheta 3 without bothering to audition alternative cartridge.

My closest dealer, who I have used for many years, no longer deals Linn at all. He suggested bringing a cartridge to my house so I could listen. I appreciated the thought but I was a bit alarmed about the thought of swapping cartridges without fully removing the arm and resetting the deck. I’ve been told in the past that there are chances of damage to bearings when changing cartridges with arm in situ. To be honest I’m sitting here with Julie Fowlis playing and I’m thinking it sounds so good, why should I be spending all this extra money? Do any of you get second doubts after splashing out?