Have CD5XS/nDAC/XPSDR/200/202/HCDR/NAPSC, I’ve previously dismissed the 282 as warm and bright against the harder sound of the 202 but I think the 282 would probably sound brilliant in this set up, trouble is I hate the aesthetics of the 282 and could not spend almost £ 5k on something I hate looking at but it does not stop the “what if?”

Apart from upgrading an NDX to NDS upgrading a 202 to 282 was the biggest upgrade I have made. It should be super in your system.

I don’t understand how the 282 can be warm and bright, that seems a contradiction to me, it could be one or the other but not both.

I don’t understand how the 282 can be warm and bright, that seems a contradiction to me.

I went from a 202/HC to a 282/HC years ago. It was better in every way. It was sort of a shock to my listening. The 282 is more open, more detailed/revealing, has better soundstage, better grip on bass, better midrange definition, a sweeter and smoother high end. It’s just better in every way.

I have since had the HC serviced and DR’d and that improved on all of it. Now I am in serach of a SuperCap DR to take it to the next level.

Josquin describes it very well in the reply above - almost a 3D sound from two speakers - it opened everything up - I was blown away and took the plunge.

I put my recent upgrade money into XPSDR on the DAC which is now absolutely the best source I can do budget wise, I have a mental block about the 282 because to put money in a 282 is money which could go into a 252 and now I think I’ve a good enough source for 252 so the 282 just doesn’t seem cost effective

I had CD5XS/nDAC/XPS/200/202/HC/NAPSC and upgraded to the 282 with 2XHC. It was a very nice and significant upgrade but what made the biggest difference was swapping the 2XHC with a SuperCap. I then finally understood how much the power supplies could contribute. A few years later I got a 252/SCDR, and then a few years later got a 552 non DR. The 282/SC still lingers in my mind as the tipping point for me and I think it is a superb combination. I found the 282/SC to be “fat/juicy” and perhaps aggressive vs the elegant, detailed, clear and more revealing 252. I apologize for the poor descriptions. I am Norwegian and have had a few beers and a couple of small glasses of Cognac. I think the 282 is a brilliant preamp!

Okay, but by that rationale, you are getting off the Naim train if you ever want to go higher than a 202 because the 282, 252, and 552 all look the same. Are you holding out for Statement?

I agree the 202 is the nicest looking pre, but still.

OTOH, I have a friend that limits his hifi to only brands that come in champagne gold because he can’t stand anything else. Different strokes for different folks I guess.

I went from 202 to 282, and it was a revelation. It did not change my system immensely in terms of tonal balance, perhaps a tad warmer. However, it is much better in terms of clarity and resolution which does make every aspect of the music clearer. I guess that the speakers are a weighty factor here as what they do with the higher quality feed is important. I don’t really factor in the looks, it’s all about the music for me.

Just make sure it doesn’t come from a batch with anodizing problems. Most of my boxes went purple but my 282 went shocking pink. This is not photoshopped. 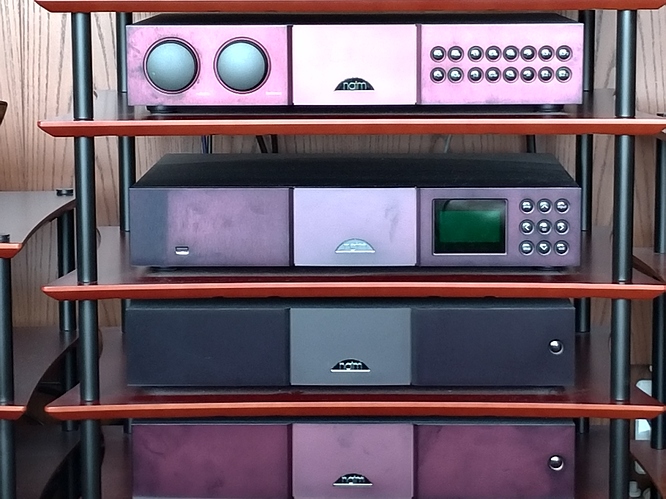 It is an unique looking system in this sea of black boxes.

This is shocking and needs to be addressed. I presume this is a rare isolated case and you may be the few unlucky ones(or only one) who experienced this?

It is rare and I was unfortunate enough to buy almost everything at the same time from the same anodizing batch. The 282 is probably the most extreme one to leave the factory.

Naim do of course handle this within warranty. There is no worry there. In my case, I bought in the UK and shipped unboxed to my home 6000 miles away in a country with no Naim distributor. I’m sure it would all be taken care of but the cost of shipping to the UK and back is astronomical and Naim aren’t really on the hook for shipping costs of customers who take gear willing to a country where they have no presence.

In 2024, the whole lot is up for recapping (a major benefit of having everything the same age). I will negotiate new fascias for the 4 affected boxes then.

I’m sure it would all be taken care of but the cost of shipping to the UK and back is astronomical and Naim aren’t really on the hook for shipping costs of customers who take gear willing to a country where they have no presence.

They certainly aren’t, but I’d expect Naim to not like having pics of pink 282s on these forums. I’ve had manufacturers cover egregious problems when I took gear to countries where they didn’t have a presence at their own expense because they realized it was something they messed up in a pretty bad way. Not something they are obliged to do, but I did consider it pretty sterling service.

Honestly, it isn’t a big deal. Naim has no resale value in my country anyway so it is about the sound and not much else. And the colour isn’t affecting that.

Though it will be out of warranty in 2024, I’m sure something can be worked out for replacing fascias during the recap. I’d rather enjoy the system than be without it for months while 4 boxes are qued in the service dep.

What about an Olive 52/SC/250 arguably better and in my view prettier.

Naim has no resale value in my country anyway so it is about the sound and not much else. And the colour isn’t affecting that.

I don’t think it’s about resale, but I like your attitude. I guess pink Naim gear just wouldn’t match my decor that well.

I’m sorry but is wrong with the aesthetics of the higher end pre-amps?

Joke right? The 2nd row is very useful if you have a headline.