The OFFICIAL Katzky2021 Atom HE vs Bartok Thread

Setup the new Atom HE and currently burning it in with 100 hours of Billie Eilish. Won’t comment re sq until it’s a fair fight but I will say something about the experience.

Opening the Atom HE felt nearly identical to opening a new Apple MacBook Pro. Normally I’ve found opening things a pain but always enjoyed opening my new MacBooks. The packaging reminded me of what’s it’s like to shop in Japan. Sure it screams “luxury lifestyle product“ but that’s what it is so it was nice. The Bartok was well packed but felt like opening an extremely expensive toaster .

Setup was easy and fast. Had Roon playing in five minutes.

Can’t figure out how to shut off the annoying white lights.

It looks very nice and is a good size for use on a nightstand or desk. The Bartok is a massive beast that barely fits on my hifi rack.

The remote control seems fine and the Bartok remote is a $600 option.

Is this a reaction to the Atom HE review in September 2021 Stereophile?

Thank you for your impressions regarding this apparently unbalanced match.

The relationship is that my daughter wanted a Bartok but is turning 16 and needs a car. Got the Atom hoping the Bartok hasn’t already ruined her. I read that review and it made me cautiously optimistic. Having listened to the Bartok for 600 hours via headphones, I am well aware of its strengths and weaknesses. I also spent years with a V1.

No doubt the Atom HE is a quality thing and a good value. My interest is if a confirmed audiophile could live with the Atom having owned a Bartok.

We await your review with interest. 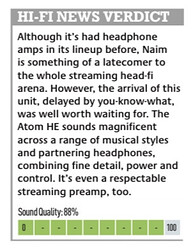 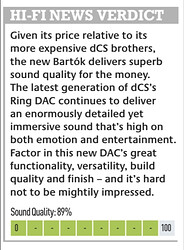 Is this an example of diminishing returns or some arbitrary number?

I would say that it is an arbitrary and, for me, fairly meaningless number. In the same way, you could also divide the weight of each unit by a nominal quality percentage to arrive at “good sound per kilogram”.

At the end of the day, what I like in my room with my system and sources is what matters to me. As a very general statement, higher price can normally be expected to deliver better quality. Where the law of diminishing returns kicks in is a matter of personal choice and disposable income.

At the moment, I spend more time listening to large Spendor speakers with NDX2/252/SCDR/250DR. I will pick up my serviced and DRed NAP300 tomorrow. The 250DR will go back into the second system and replace a NAP140 which is now on temporary duty there.

To be honest, I could easily live with just my NAC42/HC/NAP140 and Spendor 3/5 speakers, but it would never occur to me to compare the various combinations on the basis of perceived sound quality for system cost.

So?
What’s the verdict?

The Bartok I demoed in March was over a year old with many 100’s if not 1000’s of hours use. From the first moment it was the best sound I’ve ever heard. Took about 10 minutes to decide to buy. The dealer was nice enough to leave the demo unit with me while waiting for mine to arrive. For about a month I listened to the demo unit all day every day. In mid April, I received my Bartok and immediately installed it exactly as I had the demo unit. After letting it warm up for an hour playing music through headphones, I listened to it for the first time. My new Bartok was extremely disappointing. It sounded nothing like the demo unit. I kept playing music for over a week and listened to a bit along the way. After about 48 hours it started to sound really good and at around 100 hours I felt it sounded better than the demo. Prior to this experience, I didn’t believe burn in was so significant. Had I only a day long demo of a brand new Bartok I never would’ve purchased one.

The Bartok changed the way I viewed and listen to music. In fact it completely changed my tastes in music. Previously I primarily listened to modern classical, acoustic blues, some rock, and a bit of electronic music. While the Pacifica Shostakovich string quartet cycle, Muddy Waters’ Folk Singer, … brb

… and every other album in my collection of “best sounding/favorite” across all my preferred genres sounded amazing; there was one album that, even though I’ve heard it many times prior, transcended the intellectual creating intense physical pleasure in my brain. It was like a neural orgasm.

My entire life, prior to Netflix, has been spent on intellectual pursuits with the exception of certain “biological imperatives”. Learning through reading, practicing, experimentation, conversing, and reflection; applying imagination to a creative process, and solving complex problems have always been extremely pleasurable. Nothing I’d experienced in the past even remotely compares to the sensation of this Bartok induced neurogasm. It’s almost as if a previously untapped portion of my brain were activated for the first time in my life. Something like an aural pleasure center that, when triggered, floods the brain with a “super dopamine”. The feeling is similar to hundreds of micro doses of heroin with a millisecond half life. This is not hyperbole.

[No I’ve never used heroin however I did for a time take a combination of prescription medicines that together, according to my physician, create a feeling very similar to heroin. This is why one of those medications is no longer prescribed in the US. So I think I have a reasonable idea what heroin feels like.]

Just say NO to drugs.
Don’t be a fool; stay in school.

So Bartok, for me, has set the bar at a level that I previously would’ve thought absurd.

That’s it for my initial impressions of the Bartok. Next up “Initial Impressions” of the Atom HE followed by “The Showdown at High Noon”.

Sorry I’m still working on it. Have been typing my initial impressions for the past couple of days. Was waiting for 300 hours burn in before listening to the Atom HE for the showdown. I have listened to it a bit every day to get a sense of how the sound changes from new.

I can say that this comparison thus far has been “eye opening”. Writing isn’t easy for me so it’ll take some time. What I’ve learned is fascinating, at least to me, and I want to try to communicate it with some precision.

Burn in is complete. The headfi showdown begins at high noon. 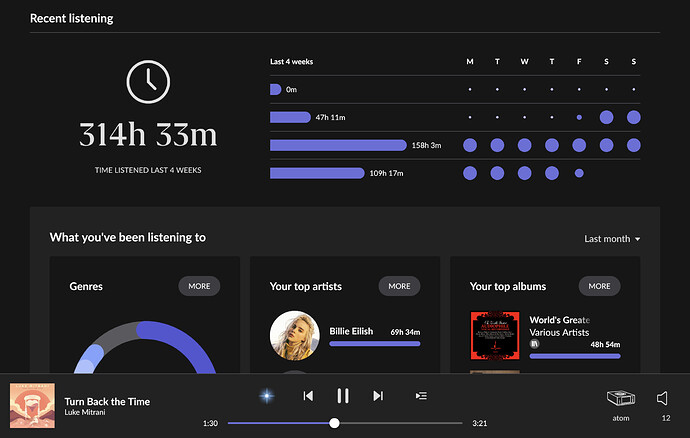 What was the eargasm album then?

Sorry…burn in complete?
What does that mean… how do you know?
Does a bell go off or something?

I think he just means it’s reached the total number of hours he’d set aside for it….

Just going by the title of the thread…isn’t the Dac in the Bartok miles ahead of the Atom HE? At least it should be for the price difference.

Since this is the only current DCS related thread I see going at the moment, an observation. DCS will no longer be offering the Network Bridge, I just read that the other day. They list reasons if you go to their website, but I was considering buying one of these at one time.
Now Innous and Antipodes seem to be front runners for High-end Dac’less streamers/servers.

That’s the $ million question. It is possible the Atom HE is underpriced. Professional reviews gave it 88% vs 89% for Bartok. This might turn into an examination of diminishing returns, an audiophile David and Goliath, or a trouncing.

Atom HE looks much better IMO.

Not sure the NB is a great choice unless your components have ability to accept master clock signals. The software is also extremely basic and, to me, unusable. Roon is almost required to enjoy dcs streamers.

It’s more than an eargasm; it’s like several times each seconds god reached into my head and put a lifetime of love in my brain for 50 milliseconds then, to keep it fresh, removed my memory of the experience. Ok… that’s a bit of hyperbole.

The album is Kraftwerk - 3-D. “The Robots” was the song. The special “headphone edition” is even better. Unfortunately it’s been removed from Tidal & Qobuz. Thank god I actually bought the eight cd set after hearing this. Now I just need to rip it. If only I had that capability…