‘ The S1 Statement Pre in my view has the genome of the classic Naim Nac52 sprinkled with up to date finesse and sophistication’.

I shall try not to make the OP too long promise, but I feel the need to put you in the picture fully. After I finally managed to get my acoustic room treatment finished to my satisfaction and the system improved further with the Townsend podiums under my Fact 12s, something became apparent which I hadn’t really expected.
Before I start talking about the 552 I will state, that it has been a fantastic preamp for 17 years in my system. I’m not here to tread on anybody’s toes about the qualities of the 552 for sure, but I have to simply report what I’m now hearing. Clearly this will also only be my subjective view, so please be gentle

There has been some off-Forum chatter as of lately re the 552 possibly initiated by myself. My 552 was serviced in May of this year, but once listening to my system however there was an aspect of slight compression or forward shoutiness on close miked vocals once the voicing got naturally raised and became more forceful in the recording. This slight weakness also clearly became apparent as the wick reached say 10 o’clock, which my room due to acoustic treatment can now withstand. JN ( sadly not active on the Forum anymore) and myself were in this respect beginning to question and speculate, whether the 552 was simply beginning to act a little bit like a bottleneck, something I’d never thought I’d be saying tbh.
So hence the old gremlin of the S1 increased its presence again on my shoulder and the shaky phone call to Signals was finally made. The demo was booked in for last Saturday with their existing dem unit with 3-4 months of being powered up and ‘some ‘ music having been put through it over that time.
Good old Happylistener helped me simplifying the Fraim set up in preparation for the day in the week leading up to the dem.
Before picture: 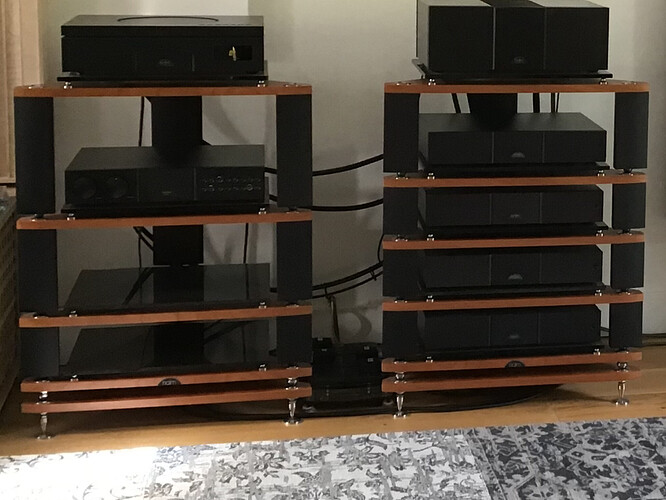 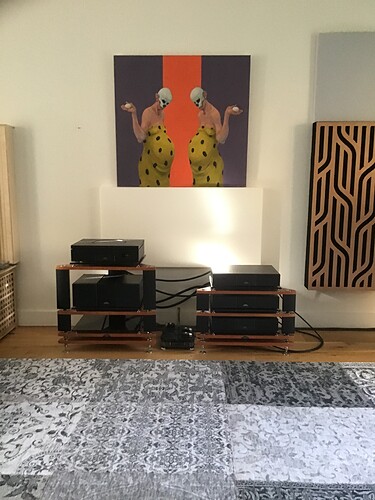 image2448×3264 1.66 MB
This much lower set up allows for less cancellation on the left hand side of my listening room, but also enabled a full 50mm thick 60x120 panel to be mounted on the wall to manage 1st reflection points from both speakers

So the time came, where Andy and Mike arrived and of course due to the peculiar circumstances of Covid everything was managed beautifully with face masks, social distancing and elbow bongs 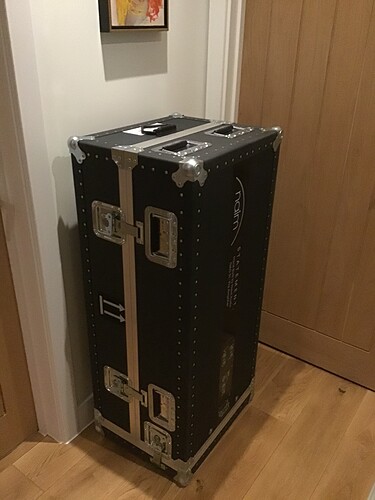 Finally after some huffing and puffing the impressive S1 got shoe horned into its prepared position: 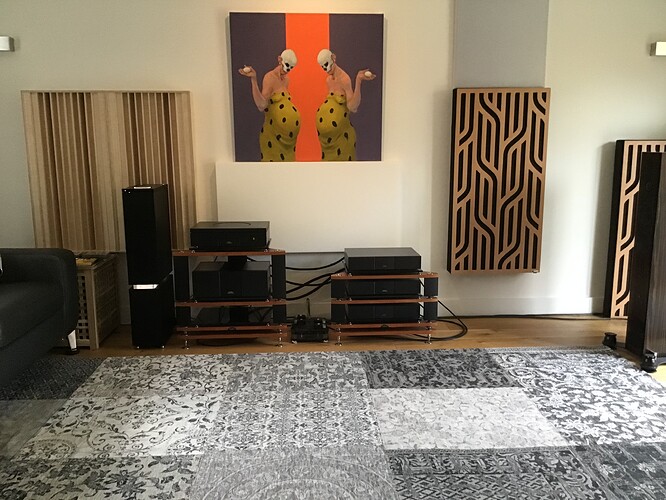 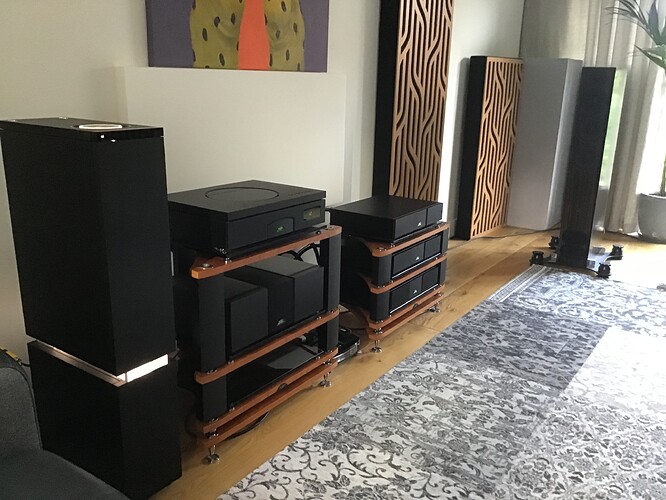 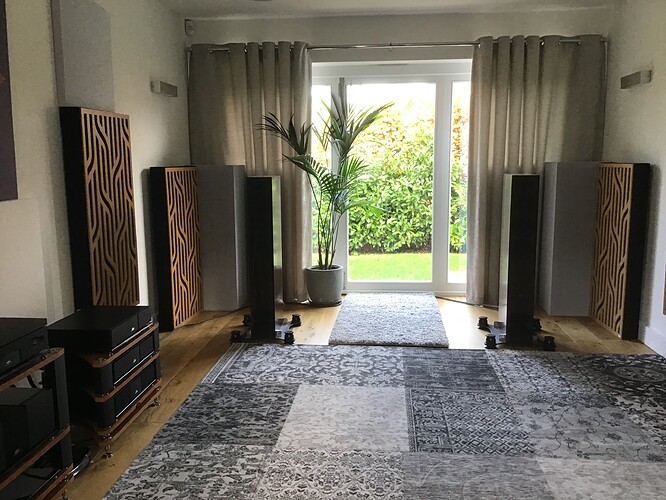 image3264×2448 2.08 MB
Due to the low plug-in location on the S1 and the lower Fraim set up the cable dressing proved a bit of a challenge, but has been subsequently sorted.
We spent a jolly few hours together with sandwiches/ coffees thrown in for good measure, of course also listening to the S1 doing a warm up, but tbh. although good it did unsurprisingly sound somewhat stilted.
I hence decided to hold back with a report in this mad old place till I was fully happy/ confident, that it had warmed up to produce good sonics and thankfully there hasn’t been much pressure from the likes of Dusty etc… much!

Assuming it is not fully run in I have also managed to stick roughly 10 hours of Yello ‘Toy’ through it daily the last week at moderate level with the door closed. My wife has been incredibly understanding bless her.
A week in this morning I sat down pipe and slippers with a supplementary coffee hoping it wasn’t going to be as volatile/ temperamental as it has been all week except for a few glimpses of potential grandeur:

Less than 30 seconds in I just about managed to not spew the coffee all over the show and I was beginning to observe a somewhat uncontrollable giggle to the point, where I was dreading a full Herbert Long-tick would ensue. This thankfully didn’t happen.

From reading a few Audio reviews ( Roy Gregory’s is excellent in my view) and Forum-archive inputs I could have been better prepared. Lots of clever things have been said already but nevertheless I’ll throw in my 2 pence worth:
Sorry to TimopNorth but a mullet it aint. To me it is working extremely well within the confines of a passive 500DR system with no weaknesses propping up either upstream nor downstream.
It is simply an amazing preamp and although having opened the window very wide, so far no muck has flown in.
A few highlights that takes the pre into its own league:
Soundstage is as Jon Honeyball stated simply stupendous ( and frighteningly I know this aspect will become further enhanced with time… and bring it on!).
Bass is so well resolved, deep, weighty creating a fantastic foundation for everything else above.
Music is coherent and everything sounds just right.
Vocals have real natural tone, highly resolved and lovely airiness of recorded surrounding space whether in a studio or a real concert.
Top class separation allowed by a highly decreased noise floor and the ensuing amount of details is most impressive. This also leading to a substantial increase in actually hearing/ understanding the words from background vocals or instruments for that matter- all rich in tone, texture and everything decays extremely naturally.

BUT maybe most importantly in the PRaT department is where the S1 really shines. The speed is astonishing and this combined with its transient attack ability the music has real rhythmical drive.
There is immense CONTROL and yet a lovely EASE in delivering the musical message.
I’m hoping others may chip in with their findings re the S1, but in simple terms I have come to realise that it is a complete game changer… and hey it may be even better tomorrow!

Great to see another S1

Yep Charlie, it is a thing of beauty really

Great post, enjoy your wonderful system, one that I cannot aspire to but that doesn’t mean I can’t be pleased for someone finding some extra bit of happiness in these tough CPOVID times. It’s also important to keep Signals going as they are really great guys and have given as much attention to me with much less costly sales in the mix.

Well done all round.

Thank you very much John, to say I’m chuffed would be an understatement

Wow peter, didn’t know you was even looking at this.
Would love to hear your system, and what the fact 12’s can do.
Would also love to hear my rossini also attached to it.
Anyway enjoy

Absolutely the S1pre is such a wonderful piece of beauty and even more so a piece of art. I truly can share your boundless excitement. I remember so well when I heard it the first time in my system, just unbelievable. Did I read somewhere “bottleneck” In your post ? Shhhh…and it will further improve and open up over the next weeks, so pure bliss ahead for you to be expected. As said already it’s great to see another S1pre around at the heart of a great system. Just lean back and enjoy.
Charlie
Oh… and not to forget if you use it as a beer stand you may actually breach its warranty

A thing of beauty, I’m sure. Well done.

Peter, have you ever considered any source other than the CD 555 and explore any others like the ND555 or even vinyl? Surely you must have been curious.
Enjoy it!

Hi Tony, can’t really say that streaming is my thing. Happy with my CD based source. I also owned a record deck once, but in the end decided to not being able/willing to store the increasing volume of records. As I mentioned on another thread this was a case of ‘one final upgrade’ for me, and where I was hoping it would have its biggest impact. ATB Peter

Hi Charlie, thank you and any chance of describing what it did for you with your lovely active Dibbles please? ATB Peter

Great review Peter, glad its ticked all the boxes. I was speaking to Andy this week and he said it sounded marvellous, and your acoustic treatment and worked a treat.
I could hear Alistair in the background teasing me saying “selling an S1 every day now, oops there’s another one out of the door…join the queue”

Super review Peter of a fab system in a very well treated room.

Enjoy your music even more!

Sorry to TimopNorth but a mullet it aint

) as I don’t think I have ever used the word mullet (until now). And it’s oop…

You have an amazing system there Peter and a listening room to match. I am sure you are going to enjoy your music to the full now.

Hi Tim, it was what I suggested tongue in cheek on Happylisteners 555PS thread, just joking…

Thank you very much Mike

Hi FR, you took the words right out of my mouth!