It can certainly make an impression!
About 12 years ago I went on a daytrip with my French girlfriend to Southend-on-Sea, only to find there was a public air show along the sea front. As we approached the pier (still the world’s longest leisure pier) we heard a jet engine roar that can only be described as ‘biblical’. Almost immediately a Vulcan executed a tight turn above the pier giving us both the full underside view of the Delta-Wings.
She was gone! This is a woman who wouldn’t run if her life depended on it, now sprinting to the seafront like Red Rum

! She had no interest in aircraft at all (demonstrated by her refusal to stay and see the Battle of Britain flight later) but was absolutely mesmerised by the sight and sound of the Vulcan.

They’ve a few engine ground runs planned, and then that’s it. It’ll be dismantled, because nobody in their right mind will act as the Design Authority for it, and without that it can’t legally fly.
They say they’ve the choice of two airfields to act as the next ‘permanent’ home, but I’ve no confidence in the VTST. They just want our money.
I wouldn’t be surprised if it was stripped of anything useful, and the rest just scrapped.

The pier was originally built to allow holiday makers from London to come to Southend by boat, and is that long so that it has the main platform in the ‘deep’ water away from the mud. So, many years ago Essex Radio announced that some local businessmen had chartered the QE2 to do a day trip to London, and tickets would be sold on a first come first served basis from the foreshore office. Queues formed before someone twigged it was very, very, early April….

I remember when I was a little lad in NZ ( 60 + years ago now) British Vulcans use to occasionally visit NZ and swoop through to the delight of everyone, it was a huge event as nothing else was happening in NZ in those days

I’m sure it was the Vulcan- would that be right?

I’m sure it was the Vulcan- would that be right?

Wikipedia suggests it could have been:

On 26 October 1959, Vulcan B.1 XH498 participated in an airshow marking the opening of Wellington International Airport

Thanks so much Matthew

I was 9 years old ha, it was such a sight seeing this monster plane

Thanks for this, really appreciated Matthew

The Vulcans visited a few times, one crashed. 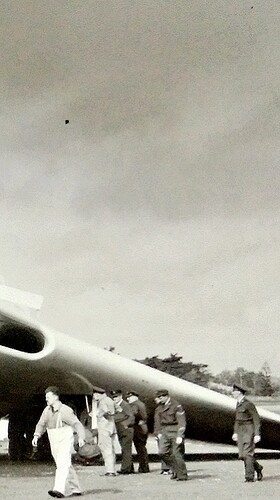 The Vulcan was taking part in a airshow being held to mark the official opening of Wellington International Airport, formerly known as Rongotai Airport. After demonstrating a ' touch-and-...

Thanks TRL - obviously my fading brain doesn’t remember that being 9 years old at the time.

But I do remember lots though

A fleet of Vulcans, refuelled mid-air by Victor tankers, bombed the airport at Port Stanley.

That gave Galtieri’s mob one hell of a shock!

Yes, I think that there was a bit of an outcry at the time that some of the aircraft involved couldn’t make it all the way back to UK soil, so landed in a ‘neutral’ country.

Very smart, I was eyeing up a V12 XJS sometime after their production came to an end, that was until I saw inside the engine bay.

It reminded me of an engine with the ancillaries ‘poured over the top’ of it and smoothed over by closing the bonnet on it quickly before it set! Lovely car but access looks terrifying. :0)

From memory, only one Vulcan flew the bombing mission at a time. Seven missions were planned, five were completed, two cancelled. They flew from Ascension Island, not Waddington as some think.

The most critical judgement of the use of the Vulcan centres on the argument that their use was “…largely to prove [the air force] had some role to play and not to help the battle in the least.” This illustrates the practice of armed services to actively seek a “piece of the action” when a conflict arises, even if their capabilities or mission are not compatible with the circumstances of the conflict. Using Black Buck as an example shows the effects of this practice can be trivial and the results not worth the effort involved.

I think anyone has to view such studies with a sceptical eye, whoever writes them.

If you look at what the operations did achieve, they restricted the use of Stanley runway by jet fighters, they destroyed radar installations, they sent a chilling message to the Junta, aircraft were relocated to protect Buenos Aires, they no doubt impacted morale on both sides in different ways and provided valuable operational experience for the RAF when such experience was otherwise hard to come by. I don’t doubt the missions supported the task force in all these ways.

The RAF was also involved in other aspects of the war - its Harriers were aboard the task force, its helicopters and Hercules were involved throughout and the RAF regiment provided missile defence at San Carlos. In other words they didn’t need Black Buck just to get their hand in.

It can be hyped up whichever way people want. It achieved very little. The RAF struggles to justify its existence as a stand-alone armed service. It should really be divided up and handed to the army and navy. Their glory was the Battle of Britain, and that’s about it.

Commander Nigel (Sharkey) Ward, the commander of 801 NAS, who flew a Sea Harrier to protect Black Buck One from fighter attack, was highly critical of Operation Black Buck. He calculated that for the quantity of fuel expended by Black Buck One to drop 21 bombs, which he estimated at 1,800,000 litres (400,000 imp gal) at a cost of £3.3 million, the Sea Harriers of the carrier force could have carried out 785 sorties that would have delivered 2,357 bombs. Ward dismissed as RAF propaganda the claim that the raids led to fear of attacks on the mainland:

“ Propaganda was, of course, used later to try to justify these missions: “The Mirage IIIs were redrawn from Southern Argentina to Buenos Aires to add to the defences there following the Vulcan raids on the islands.” Apparently, the logic behind this statement was that if the Vulcan could hit Port Stanley, the [sic ] Buenos Aires was well within range as well and was vulnerable to similar attacks. I never went along with that baloney. A lone Vulcan or two running into attack Buenos Aires without fighter support would have been shot to hell in quick time.”

We’d be here till the end of days sifting the arguments and counter arguments. Sharky Ward has his view, but then that is fighter pilot vs bombers, Navy vs Airforce. The Vulcans did degrade the radar effectiveness and they did put a big hole in the runway ahead of the task force arriving. Based on the intel available at the time that was probably very sensible. As for the Mirages being relocated, either they were or they weren’t. If they were then I think given the timing the Vulcans could reasonably take credit for it. I doubt there was a serious thought of attacking BA, given the wider geopolitics.

My family were army but I think they, and anyone who served in the RAF, would take exception to your comment about their usefulness.