The Wonders Of Medical Science!

Yesterday I had Steroid injections in both knees after suffering for the best part of a year with Stage 2 Osteo-Arthritis, brought on by running 10km a day, every day for 3 years over Lockdown.

Well, what a complete revelation - I can walk properly, can carry things, walk up and downstairs without the need to hold onto something and I am almost pain-free. The damage done to my cartilage is irreversible but combined with the physio and cycling/swimming I’m doing I should be able to avoid knee replacement surgery with any luck.

Have any other Forum members experienced such dramatic health improvements with seemingly simple procedures such as this?

The only wonder I have is why on earth would anyone run 10km every day. This is 2022 and you didn’t know the damage caused?

I’ve had a hip replacement a few years ago that was a raging success and eased pain I’d carry for over 15 years. I’ve also recently tore the cartilage to my right knee that’s had my on crutches for weeks, 5 days after surgery throw the crutches away and haven’t looked back.

“The only wonder I have is why on earth would anyone run 10km every day. This is 2022 and you didn’t know the damage caused”?

It was a gradual thing Count.d.At the time Covid struck I was living in a flat on my own and when Lockdown came in I found myself unable to commute to my office in London so I was stuck at home. Going days without speaking to anybody began to have an effect on my mental health. I went to see my GP who recommended I get out and do something aerobic to release those feel-good endorphins. It worked too well and I became addicted to it. As there were no sports centres open my options for my daily fix were limited. I didn’t know about the “dangers” but certainly I ran without any issues until the injuries kicked in and sport’s a funny thing - some people can run and run for years with no issues whatsoever, I guess I was one of the unluckier ones is all.

15 years, wow! It’s strange how one can become used to the pain, it’s almost like it’s a normal part of your life, until it’s not there suddenly and wow, it’s transformational! Well done you.

I put off because I’d heard others had problems and never full recovered. My neighbour had a replacement and still walked with limp, kind of put me off.

Sorry Jonners, I wasn’t trying to be a smart arse. Runners who take it serious and do it properly, mix their fitness with ‘less destructive’ activities. People who can get away with 10k a day (which is never ideal) have done it for years, slowly building themselves up and are lightweight. No other way of saying it. Their whole physique is built up and takes a huge load of the shock off the joints. There’s always an element of luck, but the majority of injury-free running is making your own luck.

I hope the injections work for you. My mother had them but the effect wears off and subsequent injections were largely ineffective leading to knee replacement surgery. Take it easy and🤞🏽

I can assure you that a steroid injection is not a miracle. Nothing is being repaired or restored. It will be calming some inflammation in the joint.

I hope the effect lasts a decent time, it is however variable and unpredictable. If it does it may be worth repeating but multiple injections may be unwise and each procedure is not without risk. A worn out knee is a worn out knee, however the grade of wear doesn’t always correlate to symptoms, or prognosis.

I used to discuss (and give) a whole variety of soft tissue and joint injections.

“I can assure you that a steroid injection is not a miracle. Nothing is being repaired or restored. It will be calming some inflammation in the joint”.

Thanks BruceW, this was explained to me, firstly by my GP then the doctor who administered the injections. The pain and reduction in movement is really down to the soft tissue surrounding my knees which have been compensating for the damage done to the knee itself. It was explained that the Steroid is a powerful anti-inflammatory, so with the reduction in fluid underneath the patella, it should in theory aid the physio in helping to strengthen the joint. It was also explained there was no finite time for having more injections with some patients never needing to repeat them and others needing to return every few months or so, too early for me to know at this stage.
I chose the word “miracle” because the overnight reduction in swelling, redness and itching combined with easier mobility feels like one to me but I apologies if it rankles in anyway!

That I am still alive is due to the wonders of medical science and I suspect the same will be the case for many other forum members.

About 10 weeks ago I had a lenticular nuclear cataract replaced with an acrylic lens; my uncorrected visual acuity in that eye is now -0.2LogMAR*. That is incredible, I now have better uncorrected visual resolution than I have ever had with glasses, even when I was in my late teens and my twenties.

My next door neighbor took part in a trial for new painkiller drug to relieve pain in his knee. He went on to receive new knees in both legs.

He said he became pain free, but the trial was stopped suddenly because it was found the freedom of pain meant the patients where in fact damaging knee excessively.

Medical science means this lady survived two major cancer ops in her fifties, and enjoyed her day today with me, kayaking and swimming on the Isle of Mull.

It may not be the most flattering picture, but it is definitely her happy place! 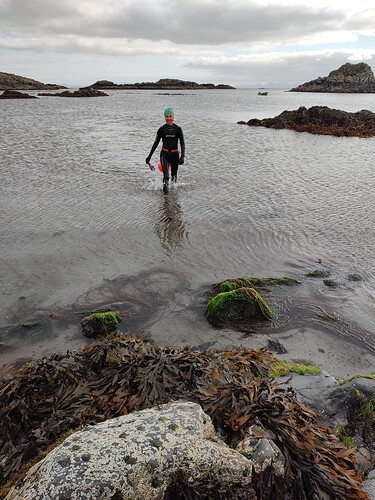 No need to apologise Count.d, honestly! I wasn’t overweight before I started the 10k runs, I played Badminton a couple of times a week, swam, walked the dog (and still do) and did a weekly 5K Vitality Park Run so I was already in good shape and pretty fit but with hindsight, stepping (or should I say running) up to 10k a day was stupid and at 55 I’m not exactly a Spring Chicken either so you were and are spot-on with your original assessment!

Ah yes, I can relate to that - I was already saying to my Partner that I’d start running again but she firmly pointed out that the damage would continue, even without pain, until it was so grave that nothing short of a replacement could be done and that would mean many months up on the blocks. Needless to say, with the exception of Badminton, my running days are over now for good. I get the endorphin rush of aerobic activity through Spin Classes and cycling.