Especially so I’d have thought with the Phantom Silkmen of Shrigley Hall.

There’s a lot to do. I think the answer lies in finding more sustainable ways of living and supporting the provinces who are the food bowls for the ever expanding cities. Climate change is something that has always been with us, but we can, and must, be more responsible for caring for the planet that is our home, simply because it is the right thing to do.

The whole ‘climate emergency’ has been sold badly. If it was positioned as ‘we’re not trying to save the planet but to save ourselves’ I’m sure it would be a lot more palatable to many.

I came across this the other day at one of the sunken forests in NZ, another perspective: 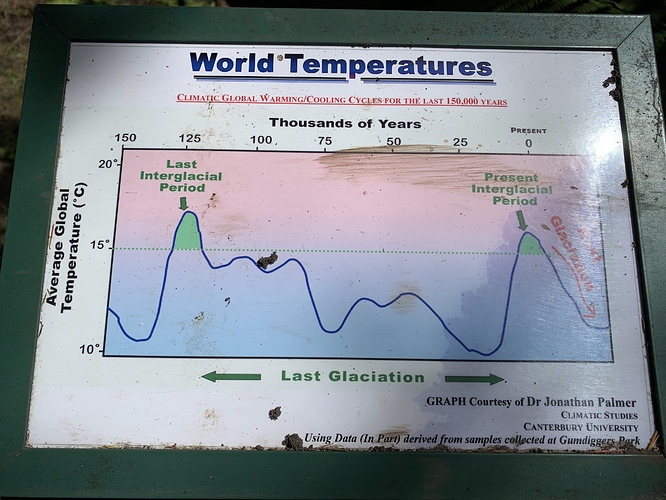 Agreed it has allowed an us and them mentality to foster, politicians then use the gap to divide us. It should be about pollution, not just the air we breathe but water.

2020, I was hoping we had an algorithm that would replace politicians. Surely a program couldn’t be as bad as the knuckle heads we have now.

I’d imagine the job of politician is one of the easiest to lose to automation. You just write a program the tells you up is down and water ain’t wet and that spends tax money on things you don’t need. Coupled with a gaff prone mildly racist botnet let loose on Twitter and you’re done. Government automation complete!

Perhaps though it is not only politicians that get it wrong. For example, would we all be prepared to use less: cut out unnecessary journeys especially by plane, stop all motor sports and so on. If we did would it do any good? I don’t know. We should do whatever we can, but I can’t help feeling we took the wrong step years ago.

That’s true, however you can travel through Europe by car or train not so easy for us on the other side of the world. I’d rather see those tech heads work on more efficient transport, surely we’re smart enough.

Doomed I tell you, we’re all doomed!

I find the current world situation the most depressing in my sixty odd years on this planet.
Politicians have turned their backs on science preferring to opt for sound bites instead.
Doubtless when the Gulf Stream stops and every winter is like 1963 our prime ministers first action will be to lower VAT on domestic fuel oil and gas!
Happy flights everyone.

So nothing we can do? It is part of the way things are.
Do we know we are the peak of the cycle or is it a guess?

As an aside, isn’t strange that when science says there is no difference between the sound of two digital cables some posters reject the logic. However, when science proclaims we are the cause of climate change those same posters accept it.

That said, chucking out the rubbish that mankind does in to the air and seas has to stop. I can’t see anybody defending polluting our environment, but it still happens.

Do we know we are the peak of the cycle or is it a guess?

Well, if you really want to blow your mind, read “The Fingerprints of the Gods”.

This may seem odd to you, but I’ve just walked outside and it’s raining (lightly). Just hope it’s falling where it’s needed most.

But James Bond’s jet pack from Thunderball became a reality last year, and someone in China has been test-flying a micro helicopter (I was going to say a person-carrying drone, though that is an oxymoron!)

What we really need is teleportation, rather than the air full of flying machines!

I wonder if advances in technology will lead to greater levels of socialism, perhaps even Marxism or some kind of benign communism will become the norm?

After all, if people aren’t needed to make stuff, provide services or care, then they won’t be earning anything to buy the stuff now being produced by AI defined robotics. This in turn leads to state controlled manufacturing and services as no profit of sufficient scale can be made in present capitalist terms.

When I was at school (1960s) we were told that computers and robots were coming and tge result wound be more leisure time. Whilst it hasn’t happened across all job sectors, it is noticeable in the manufacturing sector, where indeed the reality is more leisure time - otherwise being known as unemployment, the owners of the robots being the people that make money, and those unemployed struggling to make ends meet.

And they said that we had to listen to the scientists too.

As an aside, isn’t strange that when science says there is no difference between the sound of two digital cables some posters reject the logic. However, when science proclaims we are the cause of climate change those same posters accept it.

Many posters reject this,.they use their ears.

A bad example,.it’s like comparing apples and pears.
But back to the subject.