Hi, just a short question. Looking at the inside of a Nap 500 DR In another thread plus over the years I’ve send this in other naim boxes. The thermal paste seems to be a bit slaphappy and not that tidy compared to other manufacturers. Is there a reason for this?
Cheers

I see what you mean from the nap 500 pics. I would guess to get the maximum contact and heat transfer they apply a liberal amount, and push into place and leave the squeezed out paste.

Thermal paste is slap happy type stuff!
I guess it could/ should have been cleaned off prior to boxing. Buddy horrible stuff. Gets everywhere.

I’m told that using too little thermal paste is, given time, a potential recipe for disaster.

What, pray, is thermal paste?

Is used to fill in microscopic gaps when managing heat conductivity in computers, electroncs and alike e.g. attaching CPUs to heatsinks. The paste aids transfer.

As Richard mentions, one must be careful to manage the respective conductor interface, as some materials conduct far better than others e.g. copper. I think you need to be mindful of developing ‘hot spots’ in some applications and distortion, perhaps through differential expansion.

Ah that’s interesting. So it’s another case of Forum members thinking they know better than Naim then.

It is sticky and that’s perhaps the issue, a bit like many silicon products - noting these aren’t healthy/friendly per all the warnings on tubes - so don’t touch unless you really need to.

Don’t think so HH, just the internal finish on the opened up NAP500 on another thread does look a tad untidy vis the paste but so what - better to be oozing out than be miserly.

IIRC, one of the videos about the Statement mentions the use of thermal paste and the challenges in using it.

For HH benefit, you see it under voltage regulators as well. I would or thought getting a little scalpel and just tiding it up, particularly when it comes to such a high-end component. I just can’t but think it’s left like that on purpose. 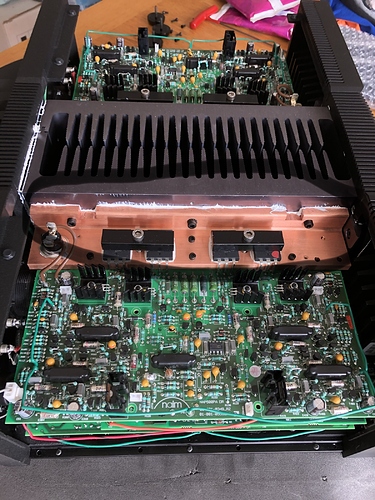 To be fair, you can see the top off the brass plate in this pic much better as the gull wing doors are not fitted, normally with the doors fitted, once open they hide the top 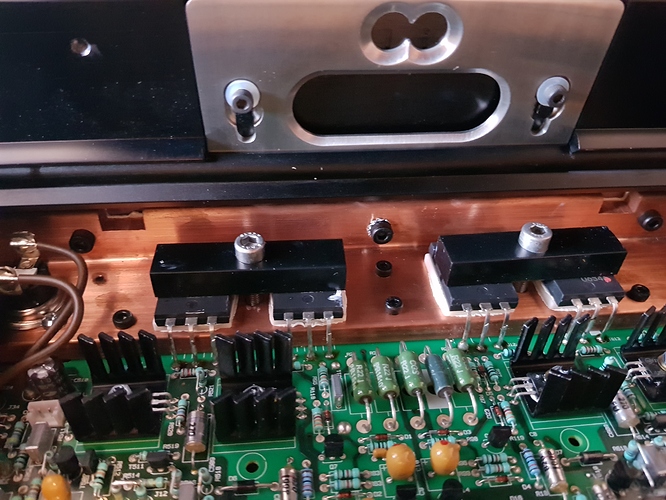 Having done a fair bit of assembly in my time, silicone paste should ooze out when properly applied as assurace that components received 100% contact area.

However, I’d always tidy the excess up afterwards rather than leave it as shown. Still it’s only aesthetic. I don’t see anything particular wrong with how Naim have done this. I can think of a few other manufacturers who leave a liberal amount of excess. It’s not a problem and it leaves evidence that it was done properly.

It could be the top edge has already been attended to.

I suspect the ‘skinning’ time on this stuff is quite quick and, in some cases, you need to use isopropyl alcohol to remove/clean this stuff, which can be more dangerous than leaving as is, especially in such a tight space and with so many other finishes (inc the PCBs) quite close.

Well it certainly gives the hand made look, my xps 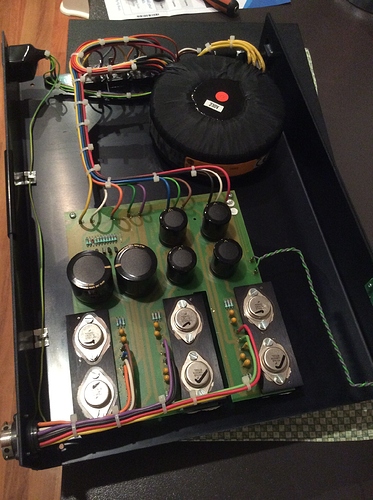 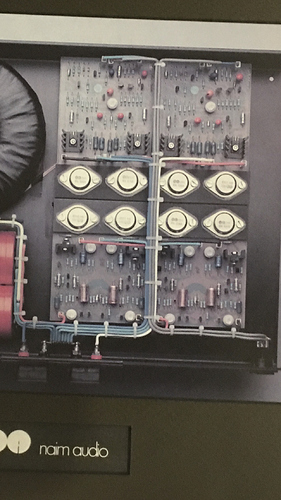 Have a look under the hood of a Bentley and see if you can see sealant oozing out of the gaskets is my argument, with respect of course.

Also this stuff is messy if you start to wipe it.
It doesn’t cure, it says a paste

There are two types of paste as well - the silicon based and non-silicon based. I believe you can’t just use any old paste - it has to be the right type for the right part interfaced. Naim probably use a special bespoke one you can’t buy from shelf or tinternet.

Once dried it can be quite easily be cleaned up I know this because I’ve seen it done. Sorry correction seen the results. A friend of mine had a service done and the thermal past was rather generous, In his own right he’s an electronics boffin he couldn’t get his head around the mess and set to it.
A Nap 500 DR in this part of the world would set you backaround $50,000. I would of thought spending a few hours or even a day to tidy this kind of thing up wouldn’t be a big ask. This is why I think they leave it for a reason. I wonder what Neil S has to say on the subject Richard?

Most types take years to dry. And many will never dry during a normal product life. Dow Corning Silicone Compound is widely used and a good example of one that takes 10+ years to sort of dry out.

Excess does buff out easily with a rag or tissue. But it is, as mentioned, just an aesthetic preference, nothing more.