Having recently acquired a Chord Epic mains lead for my new Chord S6 mains block I am hoping some folk more experienced with thick and very stiff mains cables may offer me some advice.

Ideally I want to position the block in a corner at the side of my Quadraspire rack. However in order to facilitate this the cable needs to be bent at several right-angles and seems to be under a lot of strain. Being so stiff it seems to be happier not being bent. So for the moment I’ve positioned the mains block immediately in front of the rack which means that the cable is much less bent. But frankly it looks awful.

So what are people’s experiences here? Does it affect performance if the cable is bent at sharp angles and appears to be under strain, ie. has to be forced into position? Or am I worrying needlessly. having spent £500 on this lead I obviously want to get the best from it, but not sure I can put up with the way it looks at present.

Pete - I’d try to avoid tight bends and putting things under strain, particularly at the mains plug and IEC plug.

Can you try the old NAC A5 trick of warming the cable with a hair dryer to allow it to be shaped and dressed to enable you to place the block in a more aesthetically pleasing position ?

My reply is not specific to mains leads so may not be of use, but I tried using 4mm speaker cable for the bass amp on my Naim system several years ago. After getting advice on minimum length of cable and faced with the fact that my speakers had to sit either side of my hifi rack, I had several metres of cable that I needed to find a way of “getting rid of”. I was given the suggestion of rolling the cable up and hanging the roll on a large cup-hook screwed into the back of the speaker cabinets. I later went back to the recommended Naim speaker cable but stuck with the rolled up cables.

So, perhaps you could try a variation on this by rolling the cable up and going round the corners with a gentle curve. Any spare cable could be “hidden” either behind or under the Quadraspire rack.

With mains cables it can potentially be dangerous to bend at too sharp an angle as it can stretch the insulation to the point of being too thin, or in a extreme case could crack the insulation, all depending on the construction. I recall seeing data re minimum radii of curvature for bending standard mains cables, but the only way to be sure is to ask the manufacturer of the cable.

A sharp angle is a relative term.
It’s not the angle of the bend that matters as much but the bend radius. This is just for illustration, the angle is the same 90 degrees but with a different bend radius (centre line radius).

You could ask Chord what the minimum bend radius is for the Epic cable. They should know imo.

Thanks for the advice all. The hair dryer trick would probably work but I’m reluctant to so severely heat up my nice new cable - particularly as I don’t know the construction or the heat sensitivity of the various components. I’m sure it would invalidate the guarantee. Granted it’s fine on NACA5 but that’s just PVC insulation over thick copper wire.

Thanks Donniboi for the suggestion of rolling up the cable. It’s not so much a question of excess cable as getting the very stiff cable to fit in a tight corner requiring it to be sharply bent and to be under strain.

Looks like I’m stuck with the block in front of the rack. Can’t risk trashing a £500 cable.

I’d still check with Chord to be sure and peace of mind.

I recommend a hair dryer not a heat gun.

As @RvL suggests, speak to Chord and see what they recommend.

You can’t have a block in front of the rack. It will look crap. I’d just return the silly stuff cable and get a bendier one. How about a PowerLine?

Indeed, the Naim Powerline is particularly easy to form into whatever shape you want, with the possible exception of very tight right angled bends.

I was a little intriqued that the PL is a 2m length apparently because it’s supposed to sound the best, when I would have preferred shorter lengths to minimise how much needs to be cable-dressed.

Quite a few well known cable brands recommend between 1.5 - 2 m as the minimum length for the best results. Not sure if this applies for a power strip > wall socket cable to the same extend. Maybe a bit less as it sits further away from the components ‘behind’ the power cords & strip.

Yes, it can be a bit of a nuisance. When I had four Powerlines and a mains block the cables were coiled loosely beneath the rack, as the mains socket is directly behind, which took ages to get right. Now I have a simple hydra I just stuff the wires underneath. The more fancy the system gets, the more of a pain it becomes to set it up optimally. Such is life I suppose, slaves to our art.

Almost certainly illegal on any standard UK mains circuit. The fuse is a fundamental safety requirement.

Yes… the coiliness behind my system. Looks like a mess but it’s a carefully arranged mess. 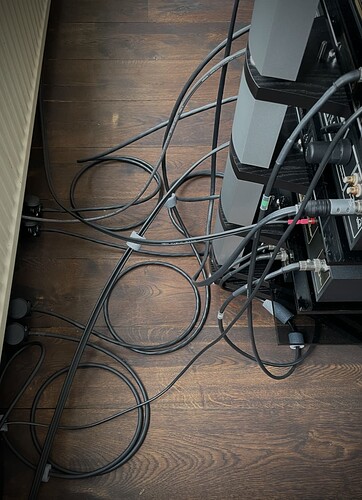 Yes, it was a mull for me too Chris. I had read much about the sonic benefits of the hydras on Naim equipment.

I miss the “coiliness” of a system. Happy to see this again, RvL!

I never took to anything coiled but that’s just me, WRYB (whatever rocks your boat), to “smoothen the flow” as was certainly the case with 7m of Nac-a5s I used then, but it meant a sprawling affair. I got away with murder from the significant half because I had had a small cozy dedicated man den.

Uncoiling any wire, helped with the sound. It wasn’t like a night and day difference, but for me, often the little bits which when added together would contribute to the overall sonics. Suddenly the system would just take off, and the jaw would drop further, and smiles stretched again ear to ear.

If the protection at the consumer unit is at a suitable rating it might possibly be interpreted as safe under the UK regs.
The fuse in a plug is typically 3, 5 or 13 Amps, and never more than 13.
UK ring mains typically serve multiple sockets, and therefore tend to require higher Amperage protection (MCB, RCD etc.) of typically 16, 32 or 50 Amps, which is too high to protect the mains lead, which is why they require a suitably rated fuse in the plug. I would hazard a guess that most people who have done away with their fused plugs have not bothered to select a suitably rated MCB to compensate

It was greek to me then, and still is to an extent now… lol But I enjoy exploring and learning. It’s fun when it comes to system and room set-up.