Thinking of trying an older Melco

As the title suggests, I’m thinking about trying an older Melco in place of my QNAP NAS running Asset.

What are the pros, the cons and differences I’ll come across?

I mostly stream my own rips which are done using dbpoweramp.

Specifically, do I continue to use the Naim app?

Can I browse by Album Artist?

Will it continue to use my sort tags - Sort Album Artist and Sort Album?

Considering one myself……perhaps @frenchrooster and @Darkebear can comment for you.

With the Melco you can use the Naim app. Your streamer will be connected to the Ethernet port of the Melco ( player) and the Melco to the switch.
You will normally hear enhanced sound quality, if the Melco is N1h60 , N1zh60 or above. Not sure the N100 is really a clear improvement.
You can tag all metadata and covers with Songkong, on your pc.
Personally I don’t use that. I have converted all my cd rips in Flac and buy hires albums on AIFF format. So all the metadata is recognised.
If you prefer WAV, @Darkebear will probably say you how he gets the right cover albums with WAV.

I have the Melco N1Zh-2 (6TB) model and use the default Twonky Server option installed on it in preference to the Minim Server option you can also use if you wish.

That model sounds very good and works fine with Naim App. I ripped all my CDs via the Melco itself using a plug-in external CD drive - just plug-in and press ‘do it’ and it ripped them to WAV and sorted out getting all the Artworks automatically from Internet, so easy to use.

In fact I ended-up getting the Melco external CD Drive for ripping rather than using a cheap commercial drive, after I had a demo from my Dealer of exactly the same CD ripped first via DBpoweramp then via a normal CD drive via Melco then finally via Melco CD Drive - I was very skeptical I’d hear any difference but it was clear with the improvement increasing from DBpoweramp worst, then the main uplift the normal CD drive via Melco and the Melco CD Drive did enough extra to merit the outlay to get one - I wanted to do all my CDs once and to the best I could.
This is something only a demo will reveal - it is ‘impossible’ there are any differences, but in fact there are - how I’ve no idea. Melco do say they pack the Metadata differently but why/how that should matter…but I heard what it did after we tried ripping a few more CDs and I got one.

The versions of Melco below the N1Zh2 level may not be worth it, but if you get a good price on the the N1Zh2 or above and you have a reasonable system you should find it worthwhile.

Thanks DB👍 there is a new Melco, plus yours and the 2 box N10……with ssd and hdd, bit of a confusing range….but Andy is on the case.

But if someone rips from a pc in Wav, will the metadata be recognised?
Because in my case, I couldn’t transfer my Naim Unitserve Wav rips directly to the Melco, because I would lost a lot of cover albums. I had to convert first in Flac.

But if someone rips from a pc in Wav, will the metadata be recognised?

Yes of course - it all works fine!

Please let us know what you discover. Am also perplexed about their range: three different case sizes, most with switch mode power supplies but one model with linear. And some with SSD versus others with HD. Will say that I have their S100 switch and was surprised how beneficial I found it. My impression is that they know their stuff.

Hi Billyrubin,
There are five models in the range. Only the first, N100, has a SMPS.
The other have linear ps inside. The N10 has the linear ps outside, as a second box.
The most expensive has SSD drives, the other HDD. Note sure the ssd sounds better. Some prefer the N10.

Thanks for all the input. All my rips are FLAC so should be okay in terms of meta data.

Surely being a server you can swap out the rust spinners for ssd?

I have read that Melco suggest that HDD formatted in their special way, sounds better than SSD. as the SSD can create digital noize.

This link shows on a page the melco journey of products so far. I have N1z/40 and just having that between the internet and my n272 is an amazing upgrade. everything is just cleaner.

Eventually if you can find a second hand N1zh2, it’s really better, and I could see some at around 2k.
Second thing: Melco can’t fit in Fraim. 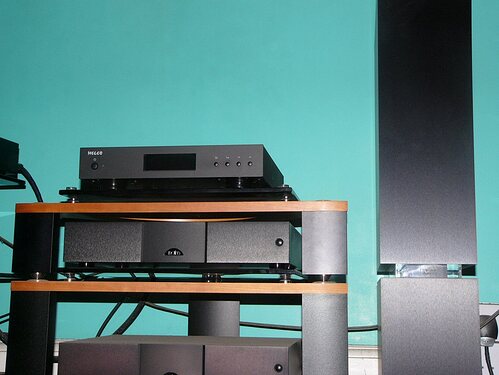 or in the dark: 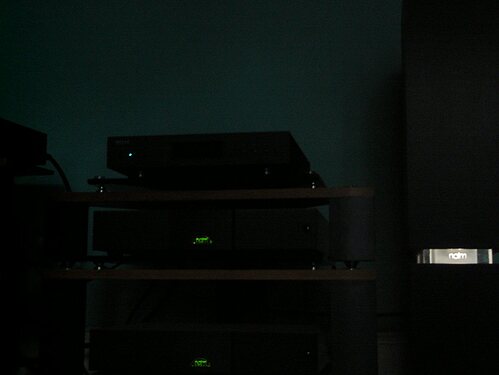 It is a deeper unit so will sit forward on Fraim, but will fit - especially on top.

I thought recently to change my post and write “ fits only on top Fraim, not on other shelves “.

@GavinB , I see you have the Isoblue rack. Will the Melco fit ?

An Isoblue shelf is deeper than a sheet of Fraim glass, so if if fits on Fraim it should be fine. 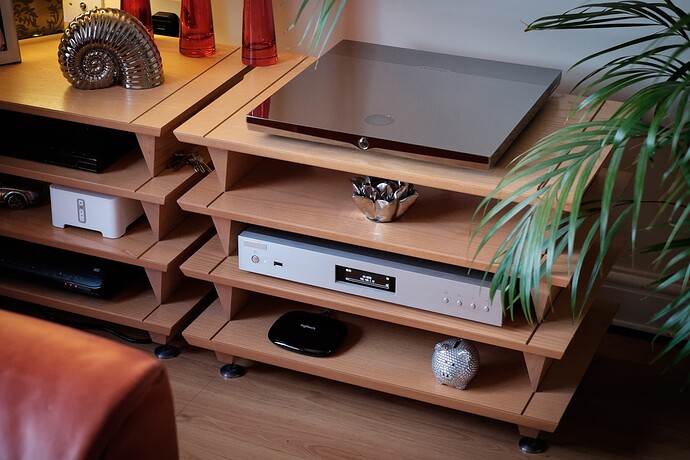