This weekend was obviously the right time to extensively listen to Sir Paul. I have to admit I hardly ever look at the Naim app once a stream is on, but this time I did and realized relatively low bit rates. I found these to be anywhere between 600 and 1100, but nerver anywhere near 1411. And it wasn’t for Macca only, other music showed the same phenomenon.
Today it is no better. Any explanation for this?

Not sure what you mean - just tried a Tidal track, looks good to me 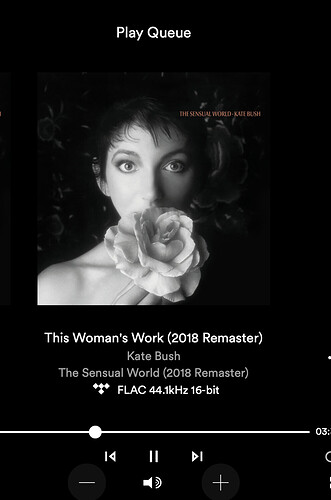 However, depending on the music, FLAC needs only 40-60% of this size, usually. So if the SuperUniti reports the bitrate for the encoded FLAC (and I would guess that it does), everything seems normal

Doesn’t the bit rate move depending on how much is going on at any particular point, i.e. YES, 1400 all the time, Phillip Glass, not so, lol.

If the kbps represents the data rate of the FLAC, as I believe it does, then yes. As you say, compression depends on how much is going on in the music.

(While a WAV is always the same)

Thanks for the explanations, but then why would Kate Bush come with 1411 and Macca with less? I have to admit do not understand it.
Just now listening to Kate @ 809kbit/s.

Kate Bush in Gadgetman’s screenshot seems to show the decoded PCM resolution, not the FLAC bitrate.

If you encode a 16/44.1 WAV into FLAC and then decode it again, the result is the same 16/44.1 WAV. However, the in-between FLAC data rate is lower and variable due to the compression.

Gadgetman has an NDX2, so my guess is that for some reason the Naim app may be showing it differently on new streamers vs. the SuperUniti.