Years ago I had Qobuz. A French firm fitting in tradition of the Ocora label. Always good musicians and a beautiful musical sound quality. Moving to Naim with built in Tidal support meant moving to Tidal. Recently native Qobuz support has been added to Naim and Roon makes it even easier.

Last night I did a comparison between Tidal and Qobuz. Started a Qobuz trial and using Roon its just a click to switch and compare the two stream providers.

Quite a revelation. Tidal streams are

I listen a lot to older “world music”, FI female singers from west-africa. Not always the best recordings, demanding music. With Tidal most sound harsh, which led me to seeking improvement. With Qobuz the music is back.

The catalogue of Qobuz is, for me, just as good or even beter than Tidal. A subscription on year-base is even cheaper than Tidal. So it’s a no-brainer, I’ll cancel Tidal and stay with Qobuz.

Interesting, i also just added Qobuz and i think i will keep it. I haven’t done any sound quality comparisons yet, but it would be interesting to know if you have compared Tidal and Qobuz at 16bit/44hz or Tidal MQA vs. Qobuz Hi-Res? Assuming you have a Naim Streamer / DAC, MQA will only be possible through Roon unfolding and i don’t know how this compares to native MQA.

Qobuz isn’t available in many countries (can’t understand why btw).
The only comparison I can make is Tidal Vs. Spotify (Tidal sounds better) and with a good streaming system Tidal sounds great.

SQ depends on the source file. It may sound different on Tidal Album No. 1 or on its remastered version or on the deluxe version 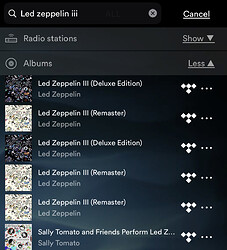 When the Tidal track is of good SQ it sounds excellent , gain is normal, audio is not saturated.

Tidal cannot be really compared to Spotify. That’s Flac versus compressed. No match.

I compared mainly 16/44 FLAC’s which had only one Tidal and only one Qobuz version. Not everything is available in remastered or de luxe edition.

My experiences with MQA are so-so, to be honest I don’t hear the difference with the plain versions. Havn’t tried any Qobuz 24 bit yet.

I had Tidal for about 18 or so months when Qobuz became available in February 2020 in the US I signed up for a 30 day free trial. At the end I cancelled Tidal and kept Qobuz. The sound was better, and $5.00 a month less expensive. I then signed up for the yearly subscription which was priced at the cost of 10 months and get 12 months of service.

Some state that TIDAL has a larger library to choose from but Qobuz has the music that I am most interested in and also the as stated above Hi Res is much better than the CD quality available on TIDAL and not interested in MQA at all.

That used to be the case, not really any more in my experience. Yes in the fringes they are not the same… Tidal and Qobuz have recordings the other hasn’t and vice versa
In my experience Tidal is better at US urban music, where as Qobuz better for European, and a better classical catalogue, albeit Tidal in the last few years has improved here.
I have found for the same distro master at 44.1/16 the two sound identical when aggregated through a pro ting service like Roon… which is hardly surprising because they are… as it’s equivalent to buying the same CD release from Amazon or CD Now, and saying one sounds better than the other…

Now local players on your streamer etc can add their own differences, but that is a different thing entirely… that akin to playing those identical Amazon and CDNow CDs on different CD player sources.

I’m so looking forward to Qobuz coming to Canada. I have Tidal, but it doesn’t sound any better than my iradio or my MP3s on a stick in the front of the NDS.
Don’t get me wrong, my NDS makes everything sound way better than they should sound, but Tidal is kind of muffled or something. Not a great sound stage or separation either. Ripped CDs on the NAS sound so much better.

I don’t believe the same distro is sent to Tidal an Qobuz. At least not for all albums. Perhaps they do some (different) processing on the stream to publish.

Roon makes the comparison very easy. Its shows all versions, Tidal, Qobuz and local NAS. A switch is three clicks/taps in Roon. Same streamer, same amp, same speakers.
For a lot of the albums in my library the differences were very real. Sound level and SQ. Far beyond placebo.

I unabashedly have both services, because initially, I had Tidal-only but found that there were some artists or titles within each artist lacking. So I did the Qobuz trial and found said missing artists or titles. In essence, both services lack certain things the other doesn’t, so it becomes a matter, for me, of supplementation. With both services, it ‘covers the bases’, so to speak. SQ aside, which I honestly cannot tell much of a difference, but believe at times there is (recording-dependent I’ve found), having both is a godsend, especially when using in the Naim app. Type an artist in the search function and it comes up on both. You can then compare what is available from each service nearly instantaneously. I often default to Qobuz because I find most of the comparative album choices end-up offered in greater than 16/44, so I go with it.
I don’t think you can really go wrong with either. They’re both at the top of the heap at the moment compared to other services; maybe not selection-wise (but not far behind at all), but SQ-wise, for certain. It’s really not even close.

At least not for all albums

Correct, but for some they are… hence a like for like compare can only be made for the same distros.
Indeed Roon makes it simple, and you can easily hear those that are identical and those that are different masters.

Sure, but it is simple in Roon to disable any DSP.

I meant postprocessing of the distro by Tidal or Qobuz. Prior to pusblishing

The processing will be on the distribution masters from the distributors/publishers.
I very much doubt the cloud stream providers would have the bandwidth, horse power, compute processing power to do this on behalf of all the music distributors for the sheer volume of media that is enabled weekly… and any changes to the master will need to be done in a specific way and then there would be copyright issues for the new master created.

My experience bears this out, as I can clearly hear some CD masters and streaming distribution PCM masters are identical… but yes not all.

When it comes to the horse power, Strymon demonstrates what is possible in real time.
Anyway, sometimes there are differences. Later on I’ll list some albums which were surprisingly different.

Back to cloud streamers, remember they use CDNs to distribute the media to their markets via the internet… so the media needs to be complete and in its final state. Last time I looked on the network data flows Tidal used Akamai amongst others for example.

But I do note Tidal has an ability to allow you to upload and release directly without a distributor, so that implies in that case they would create a distribution master for you for the CDNs they use… they must I assume then become your publisher.

I meant postprocessing of the distro by Tidal or Qobuz. Prior to pusblishing

This is certainly not the case.

Streaming networks are in the business of distribution, not production and/or remastering, and we are talking about tens of millions of titles that would each have to be processed.

Imagine if Tidal or Qobuz would unilaterally decide to ‘remaster’ world famous recordings from The Beatles or Michael Jackson, the records labels would be in court within the hour.

I’ve done back to back tests of qubuz and tidal several times and have always opted for Qubuz. There is precious little that I can’t find on there nowadays and, with a good streaming set up, it gets close to, and occasionally better than streaming local files

I have both. Many times over the course of the last year I’ve had certain songs that are available on one and not the other. Also, (rarely, but it happens) there is a problem with one service or the other and I just switch to the other. When you look at the ridiculous amount of money we spend on hifi, it’s a drop in the bucket. Since streaming is my only source I feel that the money I save by not buying a turntable will pay for many years of the duplicate service. I’ve wasted worse money. By the way Qobuz is marginal better to my ears on most music.

I agree, but all other things being equal Tidal and Qobuz ‘sound’ the same for same media distribution master… they both use CDNs for delivery.
Of course the ‘code’ in the streamer might be slightly different between the two, or even the network flow characteristics, which might create a subtle sound profile difference.
If you use an aggregator like Roon, then you can neutralise any differences occurring from this.