Tidal vs Qobuz yet again

As a side question: why did Spotify not follow through on their promise to provide cd quality streaming? Are there so few people that care about sq that this won’t seriously affect their bottom line?

It triples their data usage and associated costs, and Vorbis 320 kbit/s at the premium level is just fine on even good-mainstream gear

Sorry but something is not right here. I have Qobuz plying from my Innuos to my DAC (brinkman nyquist) via USB. The nyquist reports the same bit rate as Qobuz every time. I think there would be quite a lot of complaints if Qobuz were misleading people about the quality of their streams

This stream lights the HD light on the Ndac.
Streaming at 24bit/96kHz 2753kbps flac 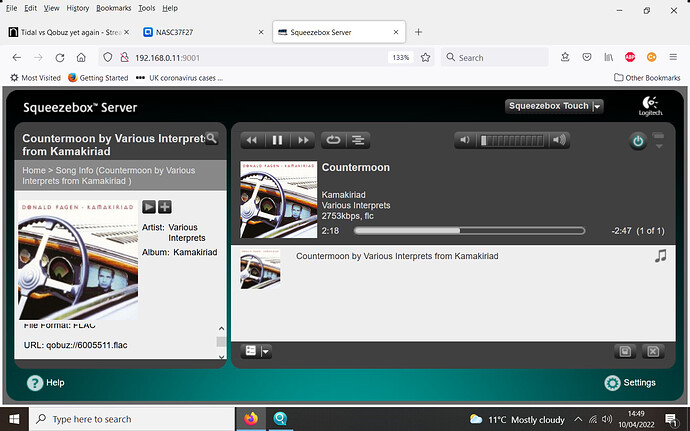 This stream doesn’t light the HD light on the Ndac.
Streaming at 24bit/44.1kHz 1594kbps flac 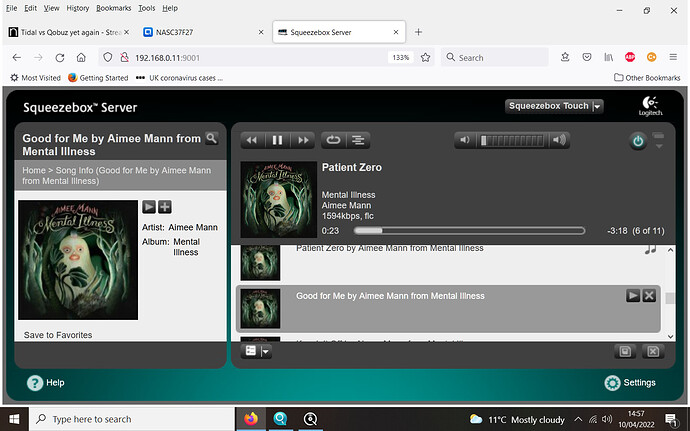 The majority of my hires streams don’t light the HD light.

However, maybe it should light up the nDAC. I don’t think that there is an official definition for hi-res audio, but Wikipedia states:

High-resolution audio is a term for audio files with greater than 44.1 kHz sample rate or higher than 16-bit audio bit depth.

Under this definition, the 24/44.1 file would qualify.

The RIAA defines hi-res as:

lossless audio capable of reproducing the full spectrum of sound from recordings which have been mastered from better than CD quality (48 kHz/20-bit or higher) music sources which represent what the artists, producers and engineers originally intended.

Under the technical part of this definition, it is not clear to me if it qualifies because it’s ambiguous if 48 and 20 must both be met.
(The non-technical part is impossible to determine unless we give artists full control)

My impression is that most people on the forum seem to agree that the 24 bit makes more of a difference, anyway. As far as it can be determined with all the insecurities about master equivalence.
(Even though in fact only 20 or so are actually usable by DACs).

The HD light is only illuminated if the stream is higher than 48kHz, so 44.1 won’t do it.

I didn’t say Qobuz streams weren’t hires. I said some are higher resolution than others.

I understand that it does not light up, I am just idly musing whether it should if it’s 24/44.1.

I didn’t say Qobuz streams weren’t hires. I said some are higher resolution than others.

Sure, but the way you worded it made it sound a bit as if it’s not hi-res when the nDac does not light up:

With regards to qobuz hires, some streams are higher resolution than others. I use an Ndac which illuminates a light on the facia when it is playing hi res; I would say most of the albums that are labelled hi res by qobuz do not illuminate the light.

Therefore my thinking whether it should light it up for 24/44.1, which is after all better than CD, and possibly so for the more important part

I would def subscribe to Qobuz ahead of Tidal but for the fact that the Android Qobuz app fails for me - I listen to a lot of music out and about. Roll on the improved app.
I think Tidal has deeper pockets than Qobuz?

In some thread I have seen numbers of 1-2 mil users for Tidal and 200K for Qobuz. So yeah

I wouldn’t want to use the Qobuz app but am using Roon at home. And for the rare travel it is OK

The majority of my hires streams don’t light the HD light.

As you already know the nDAC HD lamp only illuminates when receiving a 48kHz stream. IME the bit depth seems to be more important for SQ than the sample rate although I do think the increase in sample rate offers benefits as well.
The higher sampling rates I find are a little more refined but even good old 44/16 is pretty good.

I have used Tidal and Qobuz through the NAIM app on iPhone and iPad without any difficulties. In side by side comparison of music I found Qobuz to sound much better on my system, my room, my ears.

Have you used both products?
Do you only buy products based on how many people subscribe or buy?

Don‘t support MQA/Tidal. They need to be buried. Don‘t give MQA any support.

Huh? I use Qobuz and Roon. The question was asked if Tidal has deeper pockets, due to the Qobuz app being so poor, and I answered it. They probably do.

@Boris786 listens to music when outside, so the Naim app is no help there and he prefers the Tidal app over the poor Qobuz app.

This is all in the last few posts. Please read before attacking someone with misguided stuff.

Agreed. That is why I subscribed to Qobuz for three years despite the app issues. The moment the Qobuz app works offline I will be back to them. Still buy occasional music from them so I am not a complete writeoff

The moment the Qobuz app works offline I will be back to them.

It does. I am sitting in a train with patchy phone data connection at the Polish border this very moment and listening to downloaded subscription music in the Qobuz app

Thanks for the informative reply. To be clear I would choose Qobuz in the home Naim environment if only because I prefer the company ethos. I cannot hear any SQ difference although it does seem that most people who hear a difference prefer Qobuz.
@seakayaker: to be fair Suedkiez was answering my point and I don’t think he was making any point on SQ or basing his reply on relative popularity/subscription levels.

Sorry but it really does not work for me, in offline mode, on Android. Stay safe.

I also have Android.

Thanks, it’s the German-Polish border and not going much farther east thankfully

Just tested again on my mobile and after a few tracks it just stops. Noting your profile perhaps Qobuz should ask you to solve!

Odd. I think I have read about this in other threads in the past. And in the past I myself had troubles when I tried to download huge amounts (50 GB or so) at once - it broke something on the SD card. I would guess the file system, but this card subsequently did not work in any device and could not be reformatted or partitioned, either.

But now with a new card and more sensible downloading approach (just a few albums at once) it’s working just fine.

And please no computer problems while on vacation!

As an aside, I was going to discontinue my Tidal account and just keep Qobuz but noted that my new Tesla has “native” Tidal but not Qobuz so keeping both for now.

Btw. We also experienced some issues with qobuz with Auralic. As it seem they introduced some changes, that Auralic did not expect/handle well. But they fixed the issue in couple of days.