Have to say though - that cobham track is sublime, especially through the Titans!

I recently recorded myself playing Sweelincks Pavane Lachrimae and the odd thing was that when I was playing and listening back the experience was quite different. The best performances were not always the best experiences.

Also, there is a LOT of music I have loved performing - only as a chorister - but would never think of listening to on my HiFi.

A few years ago I recorded our Christmas Carol Service. The next week a friend had put on some of the pieces via the sound-desk. As I entered the Church I thought, ‘That sounds good’; which it did in the Church acoustic. Not so hot on my HiFi where I mainly heard our mistakes!

Having played live music for most of my life it is the dynamics, timing, transients and visceral qualities I’m addicted too. Naim comes close to that, warts and all.
Great stuff.

Interesting post, I’m conflicted by the opposite issue, I just have NAIM amps no source or speakers, and it has the PRAT etc., but listening to a modest all AN system at UK HiFi show this year, it had a touch and palpability (?, does that make sense? Is it a word?!) that I don’t come near to getting. I’m curious what the biggest influence on that is, maybe the high efficiency speakers?

The demonstrator would no doubt be playing music that flatters the tube design. No question about the timber and tone being good but the SET design power limitations slows down timing and with complex music the sound compresses with no depth.

My main issue with AN was with reliability. I’m informed by an employee friend that faults needing factory repair with components under the three year warranty period are at just under 20%. I went through three input transformers on my power amp three attenuators on my pre amp and two sets of Humming IC cables on my SUT. I decided to sell it a year prior to actually advertising but couldn’t because of continuous faults.

Make up your own mind Steve.

“The demonstrator would no doubt be playing music that flatters the tube design. No question about the timber and tone being good but the SET design power limitations slows down timing and with complex music the sound compresses with no depth.”

I think this is something that most demonstrators do, play to the strengths. However having said that, in the most recent Bristol shows, the demonstrator has been Peter Qvortrop’s son Daniel(?) and his choice of music has been broader than anything else I have heard, he was simply playing music. The words diverse and eclectic come to mind. 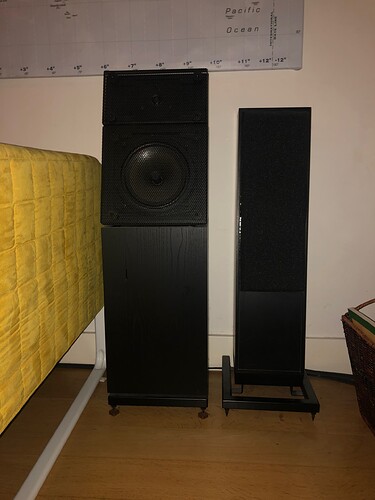 They are very impressive. I’ve been listening to a good bit Nils Lofgren tonight and the attack is fantastic.

They work so well in my room. There is a map above them, and it’s the epitome of flat earth listening.

Next is Michael J.

To be fair I don’t think anyone would choose music that didn’t flatter their systems but it was certainly an eclectic selection, no Diana Krall with these boys. Come the lottery win maybe a valve based system for fun.
However thanks for the reliability heads up, quite alarming, never had a moments issue with the NAIM.

Tonight I found a review from Hifi World in 2009 of the EAR 868PL and 890. The description includes some interesting comparisons.

At the Staverton show they played a CDR rip of an acetate of Rachmaninov playing one of his sonatas, he died in 1943, but the sound was wildly tactile. Love these guys love of music.