So does toe in smooth highs or accentuate them? I have read contrasting comments on this matter .

It depends on the speakers. Some speakers like toe-in and others don’t.
Give it a try…

It depends on the speakers, room, and layout…
But of all, adjusting toe-in is about the easiest variable to try.

…it totally depends on the speakers and their environment. In my circumstances, with Linn Akubariks, toeing in is a destroyer of sound an music.

So does toe in smooth highs or accentuate them?

People in the thread say that it depends, but by definition it will accentuate the highs towards the focal point, it will not smooth them.

Whether you like it or if it works well in the room is something that depends.

I found similar. Better at the main seating position (providing you didn’t move your head), but at the expense of everywhere else, so went back to straight

I also have 606 and they are fine with toe in. I have about 5 degrees each side only.

People in the thread say that it depends, but by definition it will accentuate the highs towards the focal point, it will not smooth them.

But that depends, some speakers are designed for no toe-in, so if you point them straight(er) toward the listening spot you may well happen to sit at an angle where it bundles high frequencies (or some of them). Plus the room influences, so I wouldn’t rule out that in some scenarios a certain toe-in may emphasize highs - even though you are probably right in most cases

High frequencies are very directional, so i don’t think there are many speakers where the treble would be more accentuated off-axis than on-axis. But since there are so many different types of speaker designs, it might not be a surprise if there are a few yes…

Edit: i think we are confirming the same idea by the way

They are indeed directional, but there tends to be a pattern of energy distribution in the bubble of sound dispersion around the tweeter, and energy doesn’t become smaller in a smooth curve with the angle. So in the horizontal plane there may be for instance a high at 0°, a low at 10°, another (lower) high at 20°, you get the picture. Given the many different speakers and rooms, IMHO it’s safe to say “it depends”, because it is indeed best to try, though it’s probably more accurate to say, “it depends but in most cases the highs will be louder on-axis”

“On axis” meaning not toe in?

On-axis (I hope I used that right) meant the speaker and tweeter pointing directly to the listening spot. Straight forward is where most tweeters will emit the highest energy. 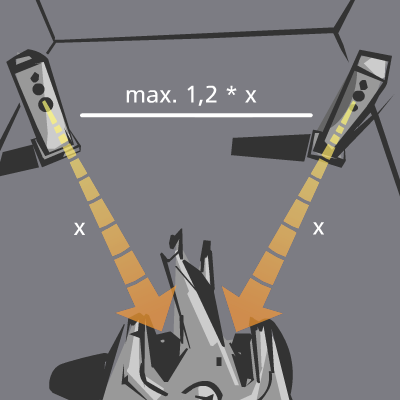 The image above is indeed on-axis, below is a heatmap of how sound energy may be dispersed in a situation like that: 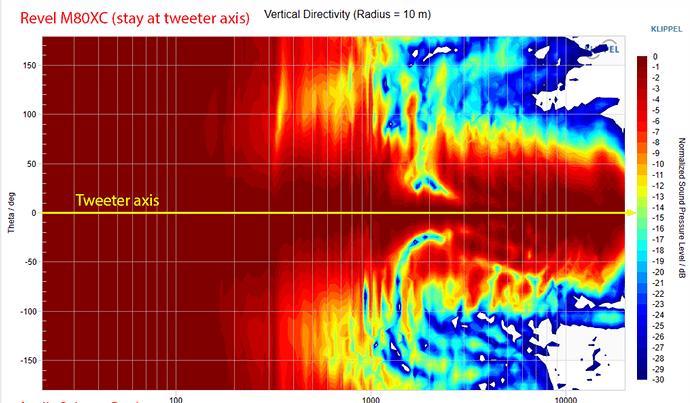 The 0-axis in the middle represents the arrow in the previous image and contains most of the energy, so if the listener sits in that line they will hear most of the accentuation.

The blue area is off-axis and will have lower energy which means smoother trebles. This area contains up to 30dB less energy in the high frequencies as you can see, which means the difference with the focal point will be quite big in terms of treble sound signature (for this particular speaker).

The bass frequencies up to about 400hz lose very little energy off-axis which means that bass will sound roughly the same regardless of the seating position.

Small image of horizontal energy dispersion as well for completeness, this field is usually a bit wider than the vertical dispersion: 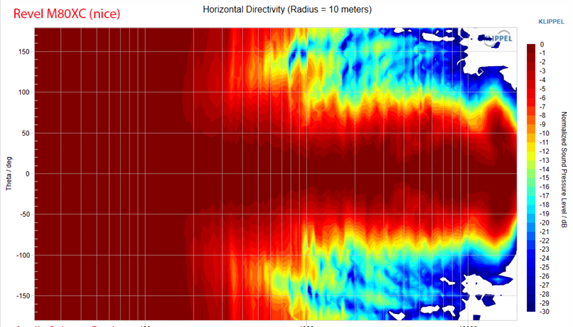 So ‘off axis’ should be smoother with little loss of central image and bass response.

This is fascinating stuff.

Will depend as much as well from the type of crossover used in the speaker.
Some designs may be more sensitive and others totally indifferent.