Qobuz’s David Solomon just shared this tip, which could be useful to some:

“Tip of the week: Does your music sometimes get stuck or randomly skips to the next track? The likely cause is a cache issue.
The Qobuz app stores songs in its internal cache when you stream them. Occasionally incompletely cached tracks don’t clear out automatically.
Hope this helps.”

Video guide to clearly the cache:

Nice one Clare thanks !

Is this only for the PC app, assume a similar cache clear for mobile apps helps.

Yep - it’s under Settings/Storage on the mobile app 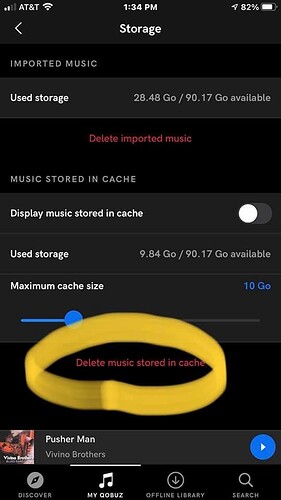 @Naim.Marketing,does this also apply Qobuz via the Naim app? Would clearing the cache in the Qobuz app affect the Qobuz in the Naim app?
Thanks. Btw couldn’t open the video

I’ve flagged it to our App team to look into.

Re video - try cutting pasting the link into your browser.

I’ve never had Qobuz grind to a halt when using their iOS app, only when accessed via the Naim app. Anyway, good to know. Thanks

I’ve noticed Roon + Tidal skips track before they ended sometimes and I’m not using Naim apps in the eco system so just a heads up that they have issues somewhere else down the path outside Naim territory.

It’s completely separate, and only relevant to using qobuz’s own app. What would concern me is why my phone’s storage is being used when streaming qobuz to eg my ndx2, which suggests my phone is part of the audio chain and not merely acting as a control device. Surely I can also switch off my phone and the music doesn’t stop, does it? I only ever use the qobuz app with my phone as the speaker.

No…
The Naim apps work by telling the Naim streamer to initiate the HTTP media transfer from the Qobuz CDNs… a very different method to what the OP refers to.
The Naim app is merely a control point and has nothing to do with the audio chain,