I still remember hearing Cornflake Girl, which was the single - and just like Rick - Going who - what - was THAT…???

(I bought the CD in HMV - and resolved never to buy from a physical shop again… But the CD was still great.)

Thanks for posting that.

Crucify EP is stunning, her versions of Angie and Smells Like Teen Spirit, just wow, let alone how good her own stuff is, absolute legend live too.

@IanRobertM ,
Isn’t CG from Under The Pink, her second album?

Her debut album was one of my favourite albums ever

Isn’t CG from Under The Pink

Yes, you are right - and my memory is wrong…

It was definitely 1992 when I first heard Tori - I was still in Japan in 91.
Guess it was maybe China… Or Winter, that I heard…?

Either way - it worked - and it was/is a great album. Followed by lots of others.

I saw her live at Birmingham Symphony Hall, around 2005…? Just her, with a Piano and a several racks of Keyboards (which got changed between set halves). Plus a Drummer and a Guitarist/Bassist. Fabulous…

Please excuse me if you already know of this album that was released before her solo career (from 1988):

Yes, aware of this album - but don’t own a copy…
Seems rather expensive, on Discogs… £25 plus…

I saw her recently at the London Palladium absolutely mesmerising performance - worth seeing her live if the opportunity arises.

I saw her live at Birmingham Symphony Hall, around 2005…? Just her, with a Piano and a several racks of Keyboards (which got changed between set halves). Plus a Drummer and a Guitarist/Bassist. Fabulous…

That was her set up when I saw her in march

That was her set up when I saw her in March

This year…? Well, near perfection is difficult to improve on…!! I recall that the 2 set of keyboards were quite different from each other - one having a Hammond or similar…?

She is still going with those subdued colours I see…

What I have never heard, in anyone else, is the ‘way’ she plays piano - and the sound she generates. OK, part of that is using a Bosendorfer, with its greater range - but its also her playing style. Fabulous…

[Many other really good musicians also have a particular playing style, of course.]

Have seen her several times in the past, my ex was a huge fan. Back in the 90s we met her and managed to get a photo of them together. She was very nice. 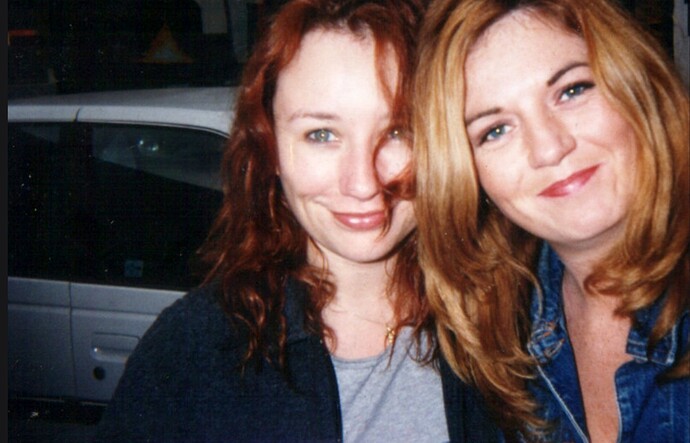 I’ve been a fan of Tori for many years and she is one artist that delivers the goods and her albums just keeping on getting better. It was the first time that I’ve managed to see her live, I’ll make sure that I book next time she’s around … a great evening.

On her most recent tour, she only played London… Booo… I decided not to go…

… and Manchester which is where it was convenient for me to go this time.
I’ve been lucky enough to see a lot of her UK shows, but the 7 Day Weekend tour at the RAH was truly brilliant - something to do we me loving the Pele album I guess that was being promoted on that tour.