When I use UpnP in the Naim app and stream music from my laptop every album play order is converted to alphanumeric and I have no idea why. Has anyone experienced and solved this issue! 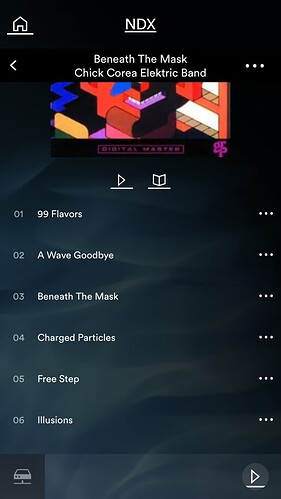 Do you have track numbers set correctly in the metadata in your files?

If I display or play the album on the laptop the track sequence is correct.

Idem. It has been happening to me for years too, so much so that I’m preferring vinyls … It’s annoying and on the PC everything is regular instead.

This needs to be the Track number tag, and not just the file name. Try downloading the trial version of Asset to give that a go.

I use DBpoweramp and Asset and I also have the issue with the track order being different when I access it thru Upnp on the Naim App.
I haven’t had time to play around with it and find out what’s wrong, but when I figure it out, I’ll post it here.

I’d be surprised if it was anything other than the track number tag either missing or wrong. Can you post a screenshot from mp3tag for one of the albums with the problem?

I suffered with this issue donkeys years ago. At the time it was with using Asset UPnP and was to do with the way the request was sent for the track listing. Something about the NDX using a request that was not commonly used and Asset had a bug. However this was a LONG time ago and it was fixed a few months later with an Asset update.

Actually I don’t think it was with an NDX because I’ve found the thread on the dbpoweramp forum and it’s 2019… Gosh I could have sworn it was longer ago than that! It must have been with my Bartok.

Thanks for the help. I’m sure it’s something simple that I’ve changed in the setup, except that I went back to defaults at one point and it still mixed them up.
I have only ripped about twenty of my CDs and I’d like to solve this before I continue with the other 350. When I make that a priority, I’ll be back and post what is happening. Thanks again, elver.

I’ll check that thread when I have a mo. Thanks.

tbh the conclusion was it’s a bug with Asset which will, one day get fixed. It was fixed next update.

I did and still do see this problem after upgrading from win7 to win10. Msft seems not to support any tag order anymore. Using foobar as upnp library works still fine.

I’m sure it’s something simple

I suspect so, too - but sometimes they’re hard to find being easy to overlook.

I recall similar once a few years ago, a complete disaster because for me most of the music I play has to be in the correct (and gapless) order. It was indeed a simple fix - some hidden selection, as tracks were correctly numbered in metadata - but I’m sorry to recall I can’t remember what, nor indeed exactly what the setup was. I have in mind I was either trying new software (Roon, perhaps?) or it was a software update (Audirvana perhaps?). So if your metadata track numbers are correct, perhaps try hunting for a hidden option to play in alphabetical order.

Thanks IB, I’ll have a look at the selectables in the setup or options in the next few days and post what I find.