I just noticed that there is a buildup on my Rega RP10 tonearm where the wires exit the end of the tone arm. It looks like the build up you get on a car battery. I was able to remove most of it with a small needle but should I be concerned, also what causes this and what should I do to stop it happening again? It hasn’t effected sound quality at this stage.

When you say 'buildup", what exactly does that mean? Are you saying it’s some kind of oxidisation? Do you have a picture?

Unfortunately I have removed most of the obvious deposit so it is not possible to see it clearly in the photograph, but yes presumably some sort of oxidisation. It looked white and furry and surrounded the white and blue wires. The arrows show slight discolouration of the metal, presumably due to the deposit! It looked very much like the furry deposits you sometimes get on car batteries at the terminalsTonearm|666x500 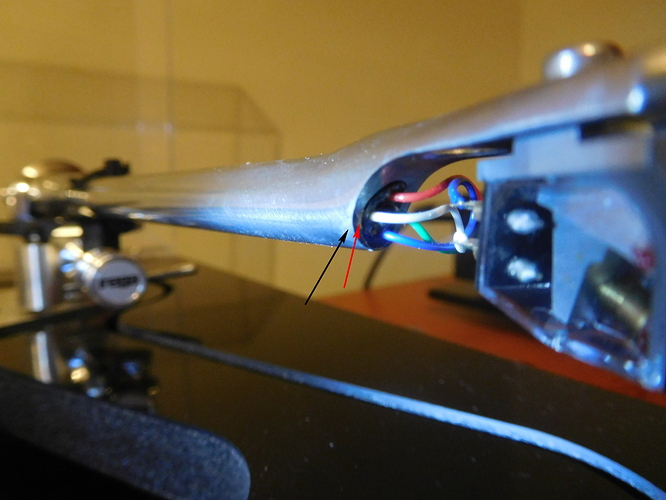 Most probably Aluminium Oxide corrosion through a flaw or scratch in the anodisation - nothing to worry about so long as doesn’t build up too quickly.

I’d only worry if it builds up so fast that within a year it looks as though it might start to break off and drop onto the disk! Otherwise just brush it off occasionally (incidentally Aluminium Oxide is effectively an insulator, so it won’t short out the cartridge or change the loading).

The aluminium oxide crystals are very ‘fluffy’, they may appear significant, but in fact there’s very little substance there - as you can see… despite the corrosion, there’s no significant pitting where the corrosion was, it’d take a microscope set on high power to actually see any pitting!

FWIW, I think that the parts of the RB2000 are just highly polished bare Aluminium so depending on exposure to certain conditions, some oxidisation could be possible. I remember on my first RB300, the paint on the finger lift first bubbled up, then fell off and underneath was the white powdery evidence of oxidised aluminium. At least with the RB2000 it’s easy to remove and then buff up.

presumably some sort of oxidisation. It looked white and furry and surrounded the white and blue wires. The arrows show slight discolouration of the metal, presumably due to the deposit

Have you ever used some sort of proprietary cleaner on either the contacts or the arm? I would suspect that some sort of substance has caused the corrosion.

No, never. Would a small amount of alcohol applied with a cotton bud be recommended to really give a good clean - or is this to be avoided?

Thanks Richard. What should I use to buff the RB2000 with?

I would ask Rega. Whatever you do though, I would dismount the arm from the table first to ensure you don’t put undue stress on the bearings.

It’s a balance of the inconvenience and risk of dismounting, treating and remounting (then probably realigning!) the tonearm against the aesthetics of getting a small white furry blob occasionally!

I very much agree with Richard that it’s best to speak to Rega, and also that, if you do try to polish out the imperfection (and chemically re-passivate the area afterwards), that you should definitely dismount the arm first.

No need to do that with the RB2000, the wiring is already more than good enough and considering the lengths that go to building the RB2000 at Rega (IIRC it takes many times longer than the regular arms), could you ever be sure that anyone else would be able to get it so right…