Have been many instances. Perhaps most famous on Morse in the late 80s original Xerxes with Naim Nait. I forget the speakers.

Spotted that. Paused and replayed the moment just to be sure what it was.

Do a silly amount of hi-fi spotting in movies and TV shows!

There was a big movie (though I forget which one!) with a Michell Gyrodec featured in a wealthy guy’s home.
There was much muttering amongst the ‘selectively-informed’ armchair movie critics wondering why such a wealthy character still had a turntable and not a cd player…

Just catching up with Grand Designs … Basildon Park’s walled garden house has a triple Fraim Naim system, but I could not see a TT, although there was space for one. Can’t rewind now as SWMBO is watching …

We saw that programme as well. Basildon Park was a sympathetic design and fitted in well to its surroundings overall (as did the house featured in the show). And it looked like the owner had a 500 series on three Fraim stacks. Didn’t recognise the large floor standers though.

Everyone should have, or have had, a gyrodec. Or an SE.

Sorry not a turntable and not on TV, but for Open House here in Norway I visited a rather lovely house designed by the great Norwegian Architect Sverre Fehn.

The house is called Villa Holme and sitting on the side in the owners chill out area was a Muso connected up to a pair of Linn Magic Isobariks, I believe. After chatting about the beautiful house, I mentioned his lovely system and he confessed to being a Linn man despite owning a Muso.

I was not allowed to take pictures inside the house so I found this one on the web…and quite a stunning house built in 1998 it is too. 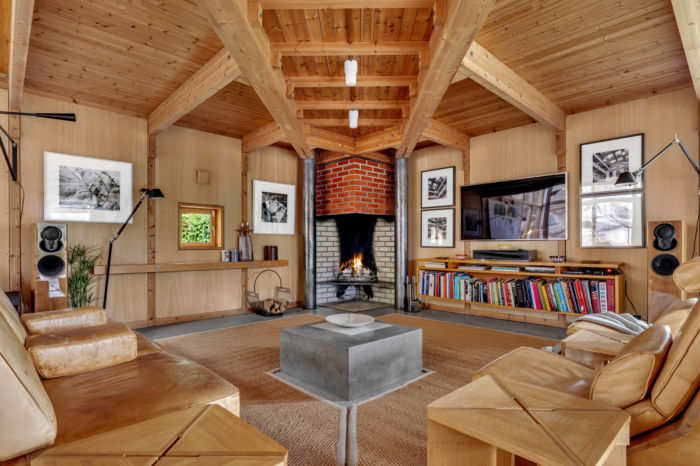 Just watched the same episode - loved both houses. There is an online brochure for the house (Cheeran House) which looks to have been sold between it appearing on the ‘House of the Year’ show in 2016 and the recent Grand Designs episode.

Was that a BeoVox Cona subwoofer between the Fraim and the wood store?

No idea about the speakers which are huge and it almost looks like the bottom two cones are pointing toward the back of the cabinet - very exotic. However the cable looked small - was it Nac 5?

I think Jason Statham had a exotic turntable and hifi in one of his dreadful Mechanic or Transporter films.

Not sure on the specs of the Naim system & cable in situ as it was a couple of weeks since I saw the programme, but it was quite a set up IIRC. Yes, it looks like the house has been sold as there are only ‘dressed’ estate agent sales photos online.

Re-run of an episode of ‘Jonathan Creek’ today, featuring a Michell Syncro (earlier one with the radiused cover) in the home of a retired rock star. (Couldn’t make out the arm and cartridge…!)

The elegance was undone, however, by a pair of truly bizarre speaker cabinets (or so we’re led to believe) hand carved in the form of some wild animal ‘en rampante’.

Early episodes of Rebus. Being Scottish had a Linn LP12.

Recent ‘ViIlages by the Sea’ episode on BBC re Alnmouth showed us round an old house in the centre of the village which probably belongs to the Pear Audio family as it included a wall of LPs, Shahinian spaekers and (probably) a Well-Tempered t/t. About halfway through the prog.