I was wondering if there is anyone here who has a system with two pairs of loudspeakers connected to it, the speakers remaining at their respective positions on a permanent basis.

Or perhaps the speakers are occasionally interchanged if there is insufficient space for two pairs to be placed permanently in the room.

I’ve heard two pairs of Quad ESLs stacked on top of each other and it was impressive. I’ve also heard that LS3/5as work very well similarly stacked.

Other than that, I have at various times run the system with an AV2 and had two pairs of speakers connected - one main pair at the front, and a another pair at the back as surrounds. No centre channel though as, for music, I tended to prefer a phantom centre. On certain music DVDs, and DVD-As it could sound very convincing. However, on others, it could also sound quite odd, it all depended on the mix.

One thing that did surprise me though was how effective Dolby Pro Logic could work when engaged to provide pseudo surround on certain 2 channel music. In particular on some electronica it worked very well, and was a revelation when applied to some Radiohead, and Thom Yorke’s The Eraser. Not purist by any means, but great fun and a surprisingly immersive experience.

two pairs of speakers connected - one main pair at the front, and a another pair at the back as surrounds.

In the past I have done similarly just playing about some time when I had other speakers kicking around, and as Richard observes it can be enjoyable - It was particularly enjoyable in a long room twice as long as its width, with a pair towards each creating a more even sound level throughout the room, which I did for a party. I did also try with one pair reversed, so that not only was there left and right facing one pair, or facing the other, but also facing either side wall (albeit reversed), but it was many years ago and I don’t remember what I thought of that, just remember doing it!

IB, was that multichannel, or 2 channel using Pro Logic or Superstereo, Quadraphonic or something else?

In the 90’s i had speakers who were made by “speaker & co” called NTG. On top of those fairly big speakers there were Tannoy M1. I loved the smoothness of the Tannoys and the bass of the NTG (10 inch, closed system 35hz on -3db) . All powered by Rotel.
But there was also a time in 2012 i had my room stacked with speakers and amps. Seperate hifi and ht set. It was a bit crowded. 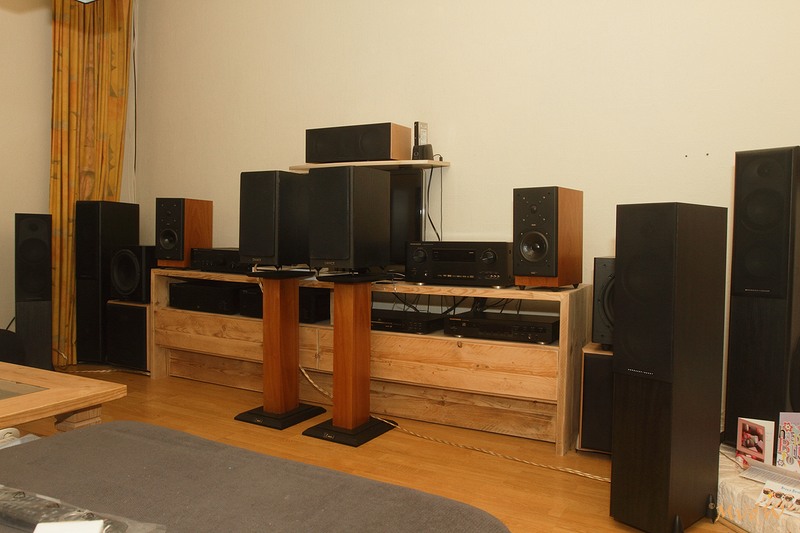 Thanks for the responses. Stacked Quad ESLs and LS3/5a look rather nice. Perhaps they are designed to be used in such a way so they sound great stacked. Multi-channel audio can be very nice as the additional speakers add the ambiance and surround feel to the sound. I recall doing that with my Yamaha AV (Dolby Pro-logic 5.1) amp many years ago.

In my case I’m looking at blending two pairs of main speakers in 2-channel stereo setups. I’m still trying to figure out a way around this, to have 2 pairs of speakers stay put at their respective placement but suspect I would eventually need to settle with one pair due to space constraint.

The second pair is temporarily placed at the side walls as shown in the photo below but they need to go somewhere else as the sound quality is affected. Both speakers sound great driven by the gear in this main system. I still have another pair of Dali speakers currently unused. 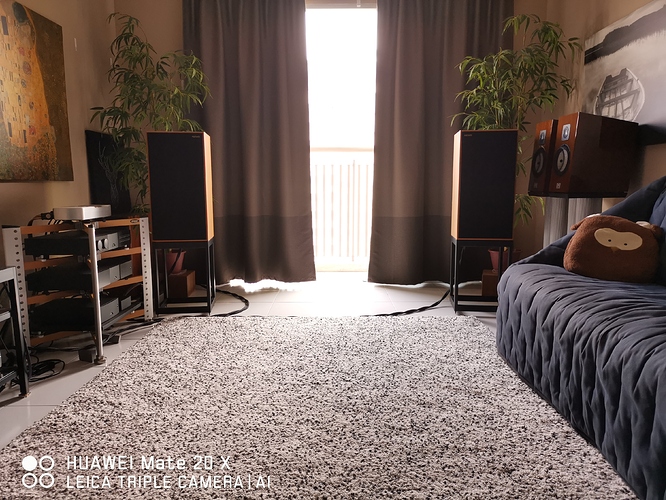 Is this your room? Very nice indeed.

I used a Naim AV1 for while to drive NAP250/Linn Kans rears to supplement NAP135/SBL front speakers. It was great providing similar benefits as a couple of well integrated subs (I am now using two nSubs to augment my NBLs)

Music sounded more natural, with increased ambience and what felt like increased dynamics and resolution.

Negative synergy is a thing.

I currently have Dynaudio XD 600’s and Dynaudio excite12’s set up in the same room. The XD’s sit behind and outside the excite’s, the room is 13.5 wide by 15.5 feet deep. It started out just as an experiment running the excite’s directly off my Mscaler/TT2, and they never left. The XD’s are also connected to the Mscaler’s digital out, and are connected to the analog out’s of my Cary Audio cinema 12 for home theatre/Xbox. You can also see my Dynaudio Confidence center, for multi channel. I am not sure I will stick with this long term, but for now it is working really well. 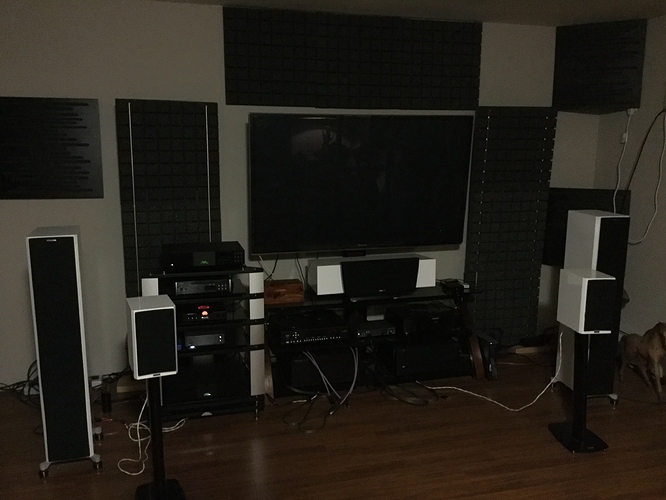 IB, was that multichannel, or 2 channel using Pro Logic or Superstereo, Quadraphonic or something else?

Hi Richard. What I did was plain doubled up, the rear and front connected together to the one stereo amp, with no processing involved. (I don’t recall if series or parallel). I played with polarities, but can’t remember if it sounded better with the opposite-facing speakers in or out of phase. The speaker pairs weren’t identical.

Nice system. One of the reasons the Excite 12 didn’t leave the room I believe, is the size of the room specifically the width. 13.5’ wide is a good space for the placement of two pairs of loudspeakers. The width of my room at 10.5’ is too small and narrow to place two pairs of speakers in similar arrangement, unfortunately.

Richard’s experience with playing 2-channel through Pro-Logic mirrors mine. I suspect it’s due to PL using phase as the basis of its encoding - anything equally present in L&R but out of phase with each other is sent to the (mono) surrounds. Given that all music is going to have the odd thing out of phase, it can lead to interesting effects. You’d expect it to be more interesting with electronica because intentionally mucking around with the phase of a synth sound is part of the genre.

There are also some CDs out there which have been intentionally encoded for Dolby Surround - some RCA discs and prog groups experimented with it and there are lists on the web for you to peruse. In the CD booklet, Wendy Carlos gives a description of how she mixed Switched-On Bach 2000 for Dolby Surround in the early 90s.

Hi
I run two pairs of speakers, one pair in the front room and the other side of the wall (dining room) another pair.
These are powered by Nait 5 as a preamp, flatcap 2 and two nap 150, one for each pair of speakers. By turning either amp off controls where the music is played.
Hope this helps.