I grew up riding 70’s two stroke trail and motocross bikes. I really love two strokes. Especially as they are pretty much (sadly) a thing of the past. So…I took a trip to the bottom of the North Island and returned with this… 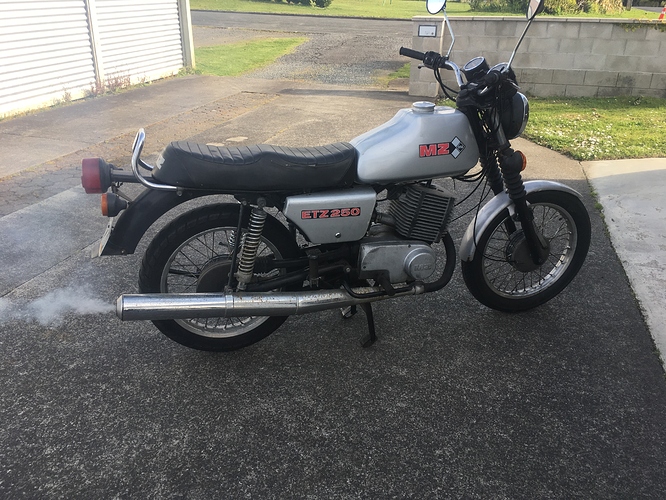 Been a while since I seen an MZ on a road

Oh yes, I had a few makes of road bikes all with Villiers engines. I finally got serious & went to 4 stroke with Norton.
However I did stay with 2 stroke for trails competition bike with Greeves, again all Villiers engines but specially made & tuned for trails events.
Other brands at that time mostly had Villiers, but outside UK brands included MZ & CZ.

Good to see you had it running for the picture, it’s not a 2 stoke if it’s not stinking the place out with smoke.

I’ve had quite a lot of two strokes over the years (10?). Mostly Kawasaki triples in the 1980s (sadly sold for a pittance). I think I’ve had over 40 bikes in total.

Still riding bikes but mostly BMWs (R1100RT for commuting/shopping and R1100GS for holidays). Just traded in my dirt bike for another (AJP for a Honda CRF250L), hopefully the Honda goes through its PDI today and I can collect it tomorrow.

I enjoyed two strokes but wouldn’t really want one anymore. But if a Kawasaki triple came along at the right price…

Anyone else have two strokes?

I don’t suppose a hedgetrimmer or chainsaw count?!

My last m/bike was a Moto Guzzi Le Mans III - but a few years ago now. My only 2-stroke was a 100cc bike for initial learning, a Yamaha IIRC.

I used to know someone who loved and collected old DJW 2-stroke cars. I recall one of his claimed benefits was that the engines have only 7 moving parts.

Yes Mate (Innocent_Bystander) they do count. I liken this bike to riding a large Stihl chainsaw (without the bits that bite) I have a two stroke lawn mower that Ive had since 1990. Cast iron bore and still a beast! I used it daily as a contractor for two years as well and its never had more than air filters and spark plugs and fuel lines.

I saw a 5 cylinder Kwaka 2 stroke (modified) on youtube the other day. 1100 odd cc’s. Sounded gorgeous but five sets of points would stress me out. Those Kwakas were lovely.

I remember a kid that lived up behind us in the 70’s. It was a wee coal mining town in NZ. He would come down and ride an old DOT 250 motocross bike around the farmland that separated our streets. Pretty sure from memory it had Earles Forkes. I was on a Z50 Honda!

I’ve always loved that Guzzi V twin. Along with the Sportster V twin I reckon they are both the Ducks Nuts.

Bikes of all sizes and descriptions ever since I was old enough for a licence. First was an NSU Quigley, then on to Lambrettas which temporarily ended my love affair after a 1 year stay in hospital. After an extended recovery back on 2 wheels again. Everything from Small Hondas through big Beemers and finally a HD.
We did everything on bikes, work transport, travel and shopping.
Wifey always used to keep on to me to get a car licence. No chance … till we got a dog. At the time I has an R1100 and trying to figure out how we were going to travel around with the mutt. Investigated a sidecar (not easy or cheap on an essentially frameless bike) or a trailer. (How much

And that my friends is absolutely true.
Now, I have neither car or bike.

There was a guy called Simon Whitlock who built these specials. A bit of a shame since it wrecked loads of engines but very impressive.

I saw a 24 cylinder bike he built at a ‘triples club’ rally about 20 years ago. He eventually built a 48cylinder monster.

Must admit the ZPower V8 based on the Z900 impressed me more though.

Hands up for a Husqvarna chain saw and a couple of Kavasaki beasts: brushcutter and hedge trimmer.

Ah that bought back memory’s, Earles forks, long time since I heard that.
They - in one form or other - were all the rage in '60’s & ’70s. They were more normally called leading-link forks. In their day they were the best by miles for off road, ‘scrambling’ & trails they seemed to ‘climb’ up & over bumps by folding the link up and back against impact. Greeves, DOT, Cotton & even BMW were big supporters of leading-link forks.
But as an avid Greeves owner they were always called ‘Greeves’ forks rather than leading link.
Thanks for opening the memory bank.

Curently 9 motorbikes but no 2 strokes. I’ve had a few - DMW with 3T Villiers engine, Francis Barnett with AMC engine (much better than their reputation implies), a couple of MZs and a 1926 2 speed Scott Squirrel.
The only one I would like to have back is the Scott. Mixing the oil is a pain but it does stop the petrol tank going rusty on the inside - a real problem these days with ethanol in the petrol.

I do remember them, at the time us hairy biker 4 stroke brits considered them as just another of the unmentionable jap crap brigade.
If I remember right, I believe they were nippy little things, maybe a cut above the others.

Yes it was very nippy for the time.
Looked good and rather futuristic I thought when I bought it 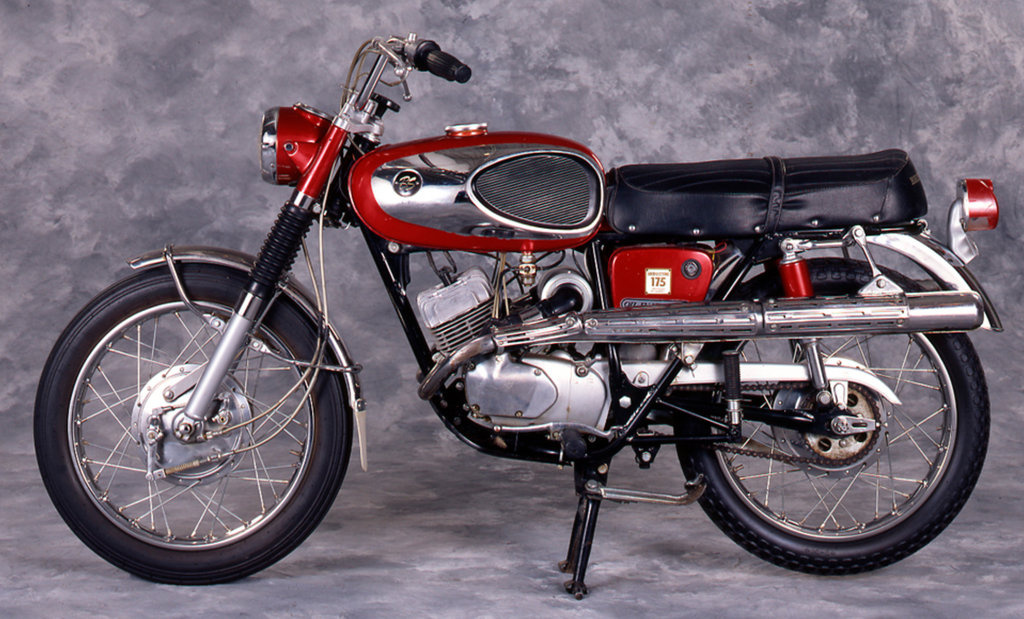 Still got the scars from the burns on my leg from the exhaust.
Not the main pipe as it had a heat shield, but from the strategically placed bolts holding the heat shield to the exhaust !!!

Owned quite a few two-stroke motorcycles 1975 - 1982
They tended to have a far better power to weight ratio and cost less to buy than four-stroke bikes. However back in those days we didn’t know any better, and these stink-wheeler oil burner engines are the most dreadful of all for the environment. The only ones around these days seem to be scooters or smoke guffing vintage, but the time has come to ban them off the roads, we can no longer afford to deliberately pollute the air with ill conceived nitrous oxides and hydrocarbons emitting engines.

Sorry to be a party pooper

For the handful that exist it’s pretty much irrelevant. Now banning Diesel’s would be a great idea. 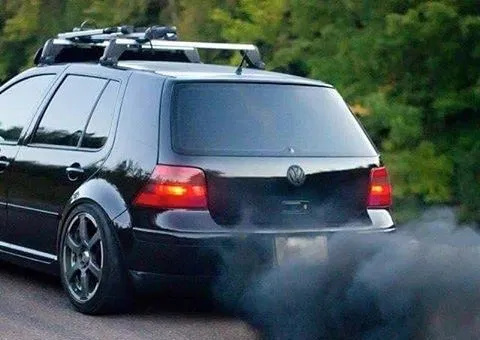