According to the media, they seem to be revelling in their being being U.K. wide power cuts… but other than some specific cases I have yet to personally talk to any one who has a power cut… so it hardly feels nation wide as quoted in the press… and I certainly didn’t experience any when I was out and about yesterday.
Anyone experience a power cut at home here, and if so where do you live?

Hi Simon, reading press/media it seems it was very limited although countrywide.
It seems to have badly affected vital infrastructure such as the rail system, I would have thought the system would prioritise that kind of customer. A concern I have is that although the problem on the N.G. was corrected in less than an hour, why did it take so long to get some of the rail systems back up & running.
The Ipswich hospital standby generator failed, so thats self inflicted in my book.
Concerning when two just generators (one CCGT & an offshore wind array) go down it has such an effect. I suspect a lot of snr mngt level talk about system resilience is ongoing.

Nothing affected in my bailiwick

Is this an example of “fake news” ?

I think more ‘sensationalism’ which sadly is all too common… they have got to fill the 24/7 news outlets somehow.

No one I spoke to at the market today here in the North West Country had experienced a power cut.

No I think you are quite wrong about sensationalism Simon. If you read the reports of train services affected yesterday, then that alone is significant. My daughter cane through Waterloo yesterday afternoon and they had no power for about half an hour. Also if you check Twitter you will see people from all sorts of transport systems tweeted that they were in darkness and at standstill. There were few trains going north from London all evening.

The newspapers and the BBC are reporting Ofgem as investigating about a million disconnections for up to 90 minutes, apparently caused by two unrelated generating stations going off line within two minutes of each other and the National Grid shedding demand automatically. I think the question they will be looking at is why the Grid shed demand in that particular way.

Incidentally we weren’t affected in Guildford but I did notice Radio 3 FM (the feed not the local transmission) had several short breaks (about a second) at the time of the outages.

By the way the Ipswich Hospital failure was reportedly due to one standby generator there failing to start. The other generators at the site started ok apparently.
Best

David it’s not a case there wasn’t an issue with mains frequency which occurs when load exceeds demand… it’s titles like UK blackout and similar which are the sensationalist headlines.
I can understand why specific facilities like transport would cut off for safety reasons if the frequency fell too far below 50 Hz… but that is a different headline… though the cause is the same … the lack of resilience.

U.K. power cut - Why it caused so much disruption.

I have just read that specific BBC article and it seems to be a refreshingly clear piece of journalism.

It’s a pity the news headlines don’t portray the same picture. I appreciate the consequences to some people, eg rail travelers, was disproportionally disruptive.

Simon
You really need to do your research before opining. If you look at the UK Power Networks twitter feed you will see an example tweeted by someone who monitored the mains frequency at the time and it swung wildly.

But this wasn’t primarily that. The National Grid suddenly found itself with insufficient capacity and shed demand. This is routine. But this time they lost more suddenly than usual and the way the demand was shed was very odd. That’s what will he looked at.

David, as I said when demand exceeds supply the frequency falls. We use protection systems to cut off to prevent damage to infrastructure and specialist installations which would otherwise occur with too low a frequency…typically UPS would kick in end installations.

Interestingly on my monitor I saw no significant variation to cause the UPS to kick in here… I checked the logs last night,

Anyway still looking for someone to say they experienced a power cut which is the point of this thread… it’s hardly a nationwide blackout if we are struggling to find anyone who had a power cut… but I’m sure there will be somebody on the forum.

We currently have a power cut here. It’s not our exposed copper cables this time either. Seems it’s much wider spread and affecting a larger area. According to the network emergency line, they have switched off an area in order to effect urgent repairs. No idea on when power will be back up.

Sorry to hear that Richard… I guess that is a separate incident due to a current fault in your regional distribution? I hope not caused by damage from too low a frequency for your area yesterday.

Yes, exactly. Or so we’ve been told…

Some high draw users of electricity and gas sign up to less expensive tariffs that cut the power in the event of insufficent supply. The cement works near here only works here when there is surplus generation capacity.
Watching Metcheck for an approaching electic storm!

Our house hold lights dipped out for about second or two last night but i’m guessing this is down to the very strong winds. All seems good today and nothing else that I know of has been affected in the Hampshire area.

This is the National Grid explanation of what happened.

UK Power Networks twitter feed you will see an example tweeted by someone who monitored the mains frequency at the time and it swung wildly.

The National Grid has to maintain 50Hz +/- 0.5Hz
When supply availability drops such as yesterday & the demand is unchanged, the frequency drops. I read on twitter it dropped to 48.9Hz yesterday
They have auto systems to shed load to maintain frequency.

Indeed, my UPS I understand only kicks in when the frequency violation falls below 47Hz.
Too low a frequency will damage substation transformers etc.

So far it appears it has been some commercial/industrial including rail transport and at least one airport that has been mainly affected… although it is also stated there have been many households affected as well… it must have affected some one on the forum? 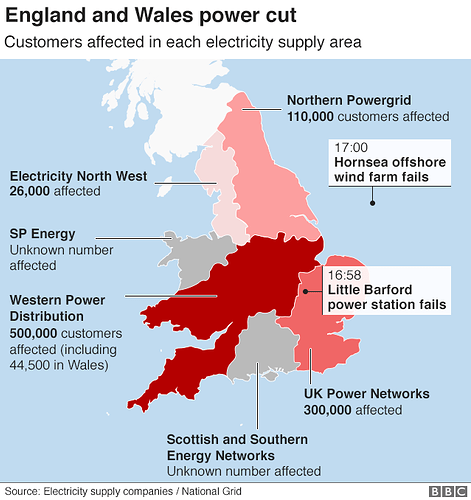 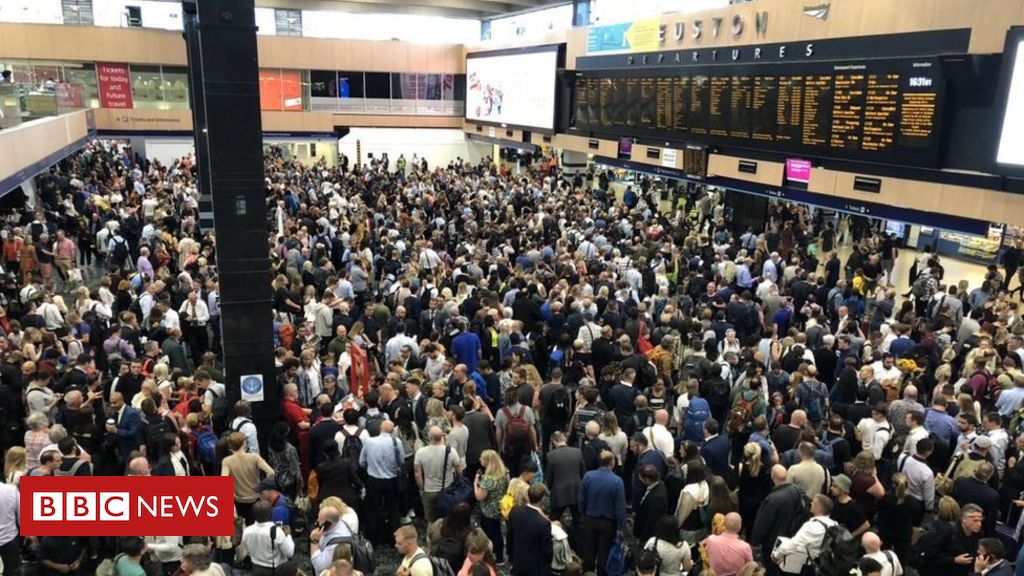 All services out of London Euston were suspended due to a signal failure.

This is one of the reports about rail outages. There are many more of course.