Uniti Atom setup for turntable use

I bought a few Naim products during lockdown and love ‘em all!

A few weeks again I decided to take the plunge and start collecting vinyl again and so obviously needed to buy a turntable.

I went for the Roksan Attessa and imagined it would be easy enough to run direct through my Uniti Atom (UA); not the case! All I got was VERY loud and very distorted output.

After talking with Richer Sounds, they told me that I’d need a pre-amp and so I bought a Cambridge Duo from them.

So, my problem is this: I have the system in place and running the turntable, via the Duo, into the UA but the output at full volume on the UA is very limited (max output measured at 77db).

Setup is:
Attessa turntable switched to Passive and connected to MM input on the Duo.
Duo connected from the output to the Input (Aux) on the UA.

Having spoken with. Friend of mine who does this for a living, he’s surprised that this setup isn’t outputting as it should.

Best to all
Gary

Something seems very wrong. According to the Roksan homepage, the Attessa has a built-in MM phono stage. Meaning that no, you shouldn’t need the Cambrige Duo.

From the Attessa page: 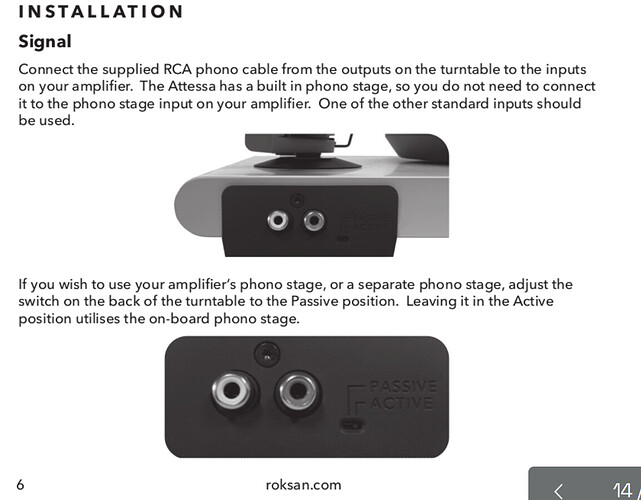 This is an odd one. The Attessa should have been all you needed, using its own onboard phono stage.

There’s only 3dB difference in gain between the Attessa’s onboard stage and the Cambridge one, which wouldn’t really count for one seemingly overloading the input and the other being far too quiet.

Somethings not right here, either with the Attessa itself, or with the Atom analog input. Do you have anything with a regular analog line output that you can try through the Atom’s input just to check?

I am surprised by neither Richer Sounds nor the friend who does this for a living figuring out that the Attessa has a built-in phono stage.

Maybe the original issue is that, used in that configuration, something was wrong, hence now switching the inbuilt stage off. But even if that was the case, buying a pre, rather than investigating why the inbuilt stage sounded so off, seems an odd choice!

Hopefully the atom can be ruled out following Richard’s advice.

Indeed. The Attessa was new, surely it’s under warranty if the output was broken. In any case, if this was the plan, the experts should have told Gary about it

Edit: Another thing is that if the Attessa was originally too loud and distorted, it is very obvious that amplifying it even more with a separate phono stage was never the solution. I’m baffled by what the experts may have been thinking

The internal stage now disabled according to the OP, so it’s just the straight MM output, not line level. Assuming the pre’s MM stage is working ok, maybe it is the atom at fault. Hopefully not, but something weird going on for sure.

It’s probably best to take both the Attessa and the Atom to the shop that supplied the Attessa. The Atom can first be tested with another line level source. If that works ok, it shows that the Atom is fine. Then the Attessa can be tested and replaced if necessary, and a refund given for the unnecessary phono stage.

Ah I missed that. Yes, there are two problems:

Makes no sense to me

It’s probably best to take both the Attessa and the Atom to the shop that supplied the Attessa. The Atom can first be tested with another line level source. If that works ok, it shows that the Atom is fine. Then the Attessa can be tested and replaced if necessary, and a refund given for the unnecessary phono stage.

Question: have you checked or changed the analogue input settings on the Atom?
I never connected anything analogue to mine, and now I have a Nova, but IIRC the options are the same:
There’s a „gain“ level you can set in the analogue input and you can also adjust the sensitivity of the input.
If these settings are off, I assume it can widely effect the analogue input volume and quality.

(The Atom overall Max volume setting is likely okay, since I assume all your other (digital) sources play fine according to your expectations.)

Excellent. That’s very likely what needs adjusting. Hopefully it means that the Attessa can be set to line out and the Atom adjusted to give the correct volume. The phono stage could then be returned.

Thank you all for the insight and suggestions; I’ll work through some of these today and if no resolution then I’ll return to Richer Sounds for further investigation.
Many thanks again.
Best wishes
Gary

Hi again
I finally sussed it.
Went back to basics and took the Cambridge Duo out of the equation, running the Attessa directly into the analog input of the Atom, with the Attessa set to ‘Passive’; no great change.
Anyway, decided to have a look at the settings in the Naim app (not sure why I hadn’t thought of that before) and the input sensitivity was set at Hi-Fi. I changed this to Portable/Phones and everything working just fine now.
Once again, thanks for your help with this. Much appreciated.
Cheers
G

p.s. re-reading suggestions, I think this is probably what you were referring to, PhilippVH. Thanks.

running the Attessa directly into the analog input of the Atom, with the Attessa set to ‘Passive’

You need to set it to active. It needs a phono preamp, either the Attessas’s built-in one (active) or the Cambridge (with the built-in to passive). Otherwise you have no RIAA correction.

Because of the added amplification, you then need another level of input sensitivity. I would expect that it must be set to Hifi. 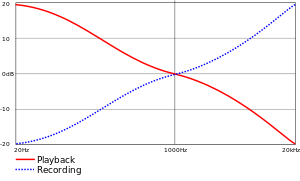 RIAA equalization is a specification for the recording and playback of phonograph records, established by the Recording Industry Association of America (RIAA). The purposes of the equalization are to permit greater recording times (by decreasing the mean width of each groove), to improve sound quality, and to reduce the groove damage that would otherwise arise during playback. The RIAA equalization curve was intended to operate as a de facto global industry standard for records since 1954, bu...

As said above, if you are connecting the Attessa directly to the Atom, the active/passive switch must be set to active. I’d then expect the Atom to be set to the HiFi setting.

Just to confirm what others have said…

I have a ClearAudio Concept Active turntable and like your Attessa, it has a built-in phono preamp stage. I have this set to “enabled / MM” since I have a moving magnet cartridge. I have my Nova input setting on “HiFi (2.5 V)”. The volume is comparable to other sources.

You can play off the phono preamp gain against the Atom input sensitivity… as you increase the gain (ie raise the average voltage output from the turntable) you must decrease the input sensitivity (which ranges from Studio 6.5 V, the lowest sensitivity with the least internal gain, to Portable/Phones 0.5 V, the highest sensitivity with the most internal gain). Note that, in addition to missing out on the RIAA filter correction, when the phono preamp stage in your turntable is disabled the unamplified signal from your phono cartridge is a lot lower (typically in mV range) than the Atom can happily accept because it simply doesn’t have the necessary input sensitivity (in the V range, as we’ve seen) … otherwise, since it has an ADC, they could have built in an optional digital RIAA filter correction function and given you a “free” phono stage in your Atom.

Fortunately, you can’t really break anything by playing around with these settings. The worst you can do is have a bit of audible distortion (too much phono preamp gain in combo with highest input sensitivity) or an inaudible signal (raw cartridge output / no phono preamp gain in combo with the lowest input sensitivity). So play around and see what sounds best, if your phono pre offers anything like lo/med/hi gain staging options.

Have fun, enjoy your lovely system!

That’s really helpful. It explains why, if the Attessa’s phono stage is turned on, the sound is loud and distorted, because the Atom was set to phones and will therefore overload. Set to hifi it should just work.

The alarming thing here is that Richer Sounds sell the Atom yet do not seem to know how it works. They were also happy to flog the OP a phono stage they don’t need. I’m sure no one here would be surprised but it really is a bit crap. So much for Naim being sold through specialist dealers with a deep product knowledge.

As a brief follow up, I googled some specs on your turntable.

A couple of reviews say that the MM cartridge is quoted at a nominal 3.5 mV output (pretty normal); this is Rojas’s spec for the Corus2 MM shown on their website . The Roksan website also says the built-in phono stage preamp gain is 42 dB; for voltage gain, this means about 125 times amplification. So, 0.035 V x 125 = 4.1 V.

All I got was VERY loud and very distorted output.

This 4 V signal might be a little “hot” for the Atom “HiFi (2.5 V)” input sensitivity, as you observed. I suggest choosing the next level: “Studio (6.5V)” so you don’t saturate / distort.

Also, one review mentioned that although the tone arm counterweight comes pre-installed, it isn’t necessarily adjusted for the correct tracking force. If you can, it would be useful to verify you’re (more or less) in the right range (2 g nominal if you have the Corus2 MM).