I have a Uniti Atom and am using Qobuz, controlled from my Google Pixel 4. It plays wonderfully at CD quality, but once I switch to hi-res (192 kHz) it skips badly. Like it pauses for a second, then resumes, then pauses. Any help at all is appreciated.

How is you Atom connected, through cable or wifi?

This is most likely caused by either a poor wifi connection or a poor internet connection.

Very likely. Welcome by the way! It sounds like your router (or ISP bandwidth you contracted) hasn’t enough ‘muscle’ to provide a sufficient buffer for hi-res file data. i.e. the Atom processor is asking for more bits per second than can be delivered. Or do you have 4 family members watching Netflix at the same time

Thanks for the reply guys. I have attached the results of my internet speed test. 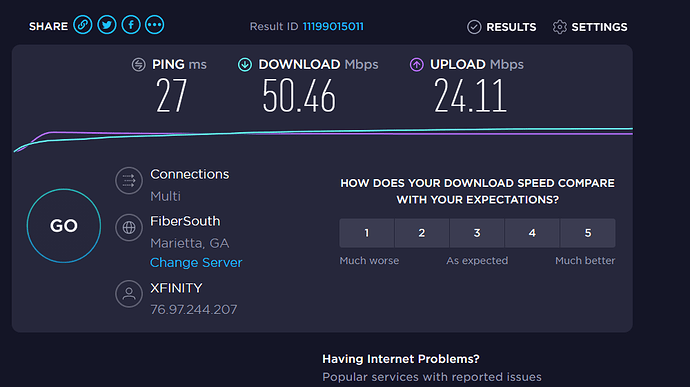 I have Comcast Xfinity Internet Service. I would sure like to be able to do this wirelessly without having to run Cat 6 from my living room up into the attic and then back down into my office/listening room.

I have Google Next extenders. I have tried setting the Uniti Atom as a Priority Device.

Greetings to the hospitable state of Georgia! That’s similar to my ISP. (download 58, upload 28, just my ping is much faster, but Amsterdam happens to be a EU internet hub, so 10ms is just because of my proximity) So your internet bandwidth shouldn’t be the issue.

There’s a few threads out here on some WiFi router brands not being able to keep a stable connection, but most seem to be UK stories. Mine is chinese (ZTE) and was fairly stable… But since even a few drop outs annoyed me, I have everything ethernet wired. ordinary CAT5… but never misses a beat.

There is no input for cat 6 it’s a network connection not an input you just plug in a cable and it uses wired networking and turns of the wireless connection.

Speed test is not a thing to trust for wireless. Wireless speeds go up and down by the second and are very dependent on the environment and what your neighbours WiFi is doing, ajl your other WiFi devices in the building and all WiFi from other houses will affect yours unless your detached by a significant amount. I would try a cable to one of the hubs and see if that helps improve things a little.

Also ensure your Atom is running the latest 3.6 firmware as there has been issues with Qobuz and hires streams on earlier ones.

open the Naim app, and access your Qobuz through it. That way, the Naim’s storage eliminates the skipping. The Naim stores 5 minutes (I believe it is) of data therefore eliminating the problem.
So scroll right to the Qobuz icon…

Your download speed is more than enough for reliable music streaming. Unless you have other heavy users on the network it won’t be an issue.
Forget HDMI, it’s for connecting to the HDMI ARC port on a TV.
The Ethernet port is an alternative to using WiFi. I would suggest that you try it, even if you just use a very cheap long Ethernet cable trailing through the house to connect it directly back to your router. At least you will then be able to tell if WiFi is the problem. Quite a few people have reported problems with Google home networking equipment here, so I would be suspicious that it might be the cause of your problems.

Or alternatively pick up the Atom and place it next to the router for a few minutes to test, then any short cable will also do (and likely the wifi will also be stable enough there too).

This was the answer that fixed my problem. Thank you soooooo much airedog!!!

You are welcome, we are in this together!