Firstly, sorry for the vague title but I can’t think what else to call it.

In my listening room I have an NDX2 currently connected to my router firstly by Wi-Fi and now, because of issues with it frequently disappearing from the Naim app, now connected via a wired connection to a home plug.

I understand that neither of these network solutions is considered ideal for optimal sound quality, but believe me, I have no other acceptable choice.

My music files are mostly in AIFF or ALAC and served by Asset from a Windows Server 2019 box (which hosts other stuff, not just music). I also have a Qb2 in the kitchen which needs to be fed music files by whatever solution I land upon.

I was thinking of replacing the Windows server with a Uniti Core. The Core would still be connected to my network via a home plug, but would send music data to the NDX2 via S/PDIF and to the Qb2 via the home plug wired network.

The question (eventually) is: would the above config overcome the sound quality shortcomings of my current setup to the NDX2? I can live with lower quality to the Qb2 as that’s normally playing music whilst I’m setting fire to the kitchen etc.
Thoughts?

If the home plug is an “Ethernet”-over-mains device (also called PowerLAN), the problem with those is maybe less limited to the SQ for the connected device (the data that is transmitted is still correct), but that it generally turns the mains wires into giant antennas, which may impact all devices in the vicinity.

Edit: Looked up home plug, that’s what it seems to be 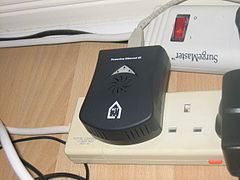 One of the concerns with all powerline systems, when compared to dedicated data wiring, is that the route of the wiring is not known in advance, and is generally already optimized for power transmission. This means that there will be situations where the system will radiate a significant fraction of the energy, in the form of radio frequency interference, or be vulnerable to the ingress of external signals. Given that the shortwave band is used both by low-power long-range telemetry and high-powe...

Your streamers need a reliable network connection to connect to the app, and for other inputs like radio and internet streaming services, and firmware updates. I would try to get to the bottom of the problem rather than avoiding the issue by using an SPDIF input.
A powerline can be part of the solution, but it may also be part of the problem and replacing it with a better wired and/or wireless network would be preferable.

Hi, yes I’ve read about that too, but I have to say that in the years that I’ve been using PowerLAN, I’ve never experienced a problem that can be attributed to them. My house is old, v.thick walls, solid floors etc. I can get a better Wi-Fi signal on the top floor than I can in the room only a couple of metres from the router. PowerLAN has been the only acceptable way I’ve been able to network some of the more challenging rooms.

If you have to, you have to, I’m just saying that the problem is in the overall pollution and less in the individual connection, so whether your plan brings any benefits is less than sure.

Isn’t a mesh wifi an option? It nearly always is

Wireless connection at the NDX2 end is, according to the Naim app, “Very good”. Using Wi-Fi to connect the NDX2 means that although it is separated from the router by about 5 metres of clear air, the app keeps losing it each time it comes out of standby. Since connecting to the PowerLAN the connection had been rock solid.

The Wi-Fi, per se, isn’t the problem, other than the received wisdom that is is less than ideal SQ-wise (not sure why tbh). The fact that the NDX2 reliability vanishes from the Naim app is a nuisance rather than anything else.

Mesh doesn’t seem necessary as there is about 5 metres of direct line of sight clear air between router and streamer.

I’m pretty sure that wifi is more benign than PowerLAN. At least there was never a suggestion that wifi users should be prosecuted under the Wireless Telegraphy Act.

The disappearing on wifi should normally not happen if everything is working correctly, no idea

Well your suggestion is certainly the cheaper option

, and probably the one I’ll go for, so thanks, much appreciated

Wireless connection at the NDX2 end is, according to the Naim app, “Very good”.

This new feature of the Naim app has been widely reported to provide meaningless results so I would take that with a pinch of salt.

Powerline connections can work, but they can also cause problems. Do you use them for other devices as well as your streamer?

In short no. If your hifi sounds naff then look elsewhere than a server (which I assume is in another room)

FWIW if I had a PC being used for such duties I would install OpenMediaVault on it rather than windows, but again would not really effect how music ‘sounds’.

The Wi-Fi, per se, isn’t the problem, other than the received wisdom that is is less than ideal SQ-wise (not sure why tbh). The fact that the NDX2 reliability vanishes from the Naim app is a nuisance rather than anything else.

Mesh doesn’t seem necessary as there is about 5 metres of direct line of sight clear air between router and streamer.

If it’s only 5 metres, I’d be looking for routes to run a length of ethernet cable. A flat ethernet under the edge of a carpet or behind wood flooring trim etc. If it’s carpeting on a wooden suspended floor over a solid floor, then maybe in the air gap underneath the wood.

You get as creative as you like. In one room, I took off a section of the skirting board, ran a thin plastic pipe behind it so I could thread cables along. Reattached the skirting using small wood blocks to keep the skirting board an equal distance from the wall then used plaster to fill the gap. In the end it just looked like a chunky skirting board.

Hi, yes but the streamers are the main users. Things like TV are using Wi-Fi

The server hosts other stuff along with the music, so to me at least, Windows is the easiest option

Hi, yes I’ve read about that too, but I have to say that in the years that I’ve been using PowerLAN, I’ve never experienced a problem that can be attributed to them.

I too have used data over power units for 5 years. They provide a stable connection, support wired connection and much better than wi-fi. I use Devolo 1200 and 500 series units. I had a noise issue with a Devolo 1000 unit so returned it.

To replace I would need an external ethernet cable and still have a subsidiary issue of a printer elsewhere. It is still a potential issue to use them on the power circuit even if not used for the hi-fi connection.

I would prefer not to use data over power but have little choice.
It works well, is stable and without impact on SQ. Problems are totally over-rated.

Hi,
Same setup here, devolo 1200 & 500 units and have never had an identifiable problem with them.

Hard wiring between router and streamer is impossible at an acceptable level of cost, aesthetics, and marital harmony so I’m kind of stuck with the PowerLAN solution.

So far nobody has come down on the side of inserting a Uniti Core into the mix so I guess I’m going to save myself some money by not bothering with one.

The question (eventually) is: would the above config overcome the sound quality shortcomings of my current setup to the NDX2?

What SQ issues do you have?
I have AssetUPnP on a dedicated Windows 10 machine as a 24/7/365 server using flac files and have no SQ issues. I also have Qobuz, Internet Radio and a second system running over my network.

Well I’m not sure that I do have an SQ problem and on reflection think I may have fallen victim to the old “a bloke down the pub reckons…” way of thinking.

So you will have a Core switched on all the time instead!
My server is in a cabinet and rarely touched. New music is added over the network.
AssetUPnP is too good for me to ditch it.
Save your money for a different upgrade.

Well yes, I would but I assume it’s power consumption would be far lower, especially with an SSD fitted. In any event, I too like Asset and if I fitted a more efficient power supply into the server that may give me some energy savings at a far lower price than the Core.