Hi, I’m using Uniti Core, Mu-So and the Nd5xs. How can I switch to the party mode on the Core in order to stream simultaneously on both devices? I’ve checked all manuals but no instructions found… btw the uniti core had to be taken back and sent to England, as it was not working with the toshiba hdd 4tb, as described in my other post. The new one is working so far…

@davidhendon is the specialist here , he will answer you very soon probably.

Not sure I’m really the expert as many here will know this answer, but what you do is set it playing on either streamer and then you go to the now playing screen in the Naim app by tapping in the bar at the bottom of the screen of the album you are playing, and in the bottom right hand corner of the now playing screen you will see a square icon of four squares arranged as 2x2. You tap that and you get a multiroom menu which allows you to select your other room or rooms and set relative volumes etc.

It’s called multi room rather than party mode but it’s the same thing.

I don’t use party mode as such, although following @davidhendon instructions on my set up I start my NDS (lounge) as a master then add other rooms as required (4x’qutes) . Below the master is check box for party mode, which I believe runs in a lower sound quality. 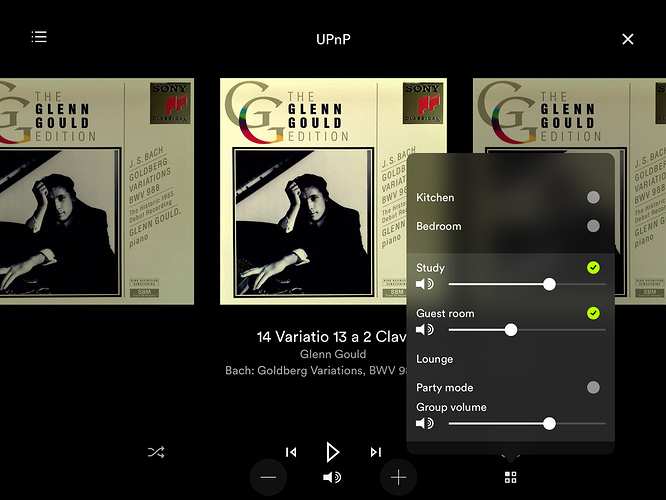 I think all “party mode” does is select all available rooms and set their volumes to be the same.

Multiroom doesn’t work with high definition rips incidentally, nor with analogue, and there are also bitrate limitations for multiroom over WiFi to muso or Qb but I’m not sure of the details.
Best

As an aside, does it matter which device you start from in terms of sound quality, I.e. does multi room play from the selected device to the others, or are they all playing directly from the Core?

The master is CD quality and the others are MP3.

The Core is not a streamer, and therefore isn’t multiroom capable.

it’s multiroom nas/ server capable, but has to work with a multiroom capable streamer. If i understood well…

The new streamers digitise their analogue input signals so that they can be sent as multiroom streams, although this doesn’t apply to the OP’s Muso and ND5.

Multiroom is a function of the streamer, not the server. The Core may be able to send multiple streams, but the Multiroom function, where streams play in sync on two or more streamers, is done by using one streamer as ‘Multiroom server’ and using it to select others as ‘Multiroom clients’.
I’m not sure where this idea about multiroom streams being limited to MP3 comes from, though?

What this is referring to is that the Core can serve up to 12 streams to 12 streamers at the same time. They are not the same stream served to 12 places though, so won’t be in time with each other as each has to be started separately. But it’s handy if you like Beatles and your partner likes Bach while the kids like Taylor Swift or whatever.

I’m not sure where this idea about multiroom streams being limited to MP3 comes from, though?

I’m not certain about this, but I think it’s multiroom from a muso or Qb master which is MP3 if it’s connected by WiFi. Maybe someone else knows the detail here…

As I understand it, if you are playing an album in CD quality on the ND5xs and multiroom it to the Qb, the signal going to the Qb is in MP3 quality. The same happens if you start with the Qb, with the signal to the ND5 being MP3.

A server such as a Core or Asset can send multiple different hi res streams to a number of clients. So with my 272 and three Qbs I can have four different albums running in any resolution simultaneously. But if they are all playing the same stream only the master (the one that starts it off) will be in the original resolution.

How it works with the new platform I’m not sure, but in this case the OP is asking about the legacy streamers.

As I understand it, if you are playing an album in CD quality on the ND5xs and multiroom it to the Qb, the signal going to the Qb is in MP3 quality. The same happens if you start with the Qb, with the signal to the ND5 being MP3

So the streamer would have to transcode to MP3 on the fly with no additional latency to play in sync to multiroom clients? I reckon if you play 16/44, it multirooms 16/44.

I really do think if your muso or Qb is connected by WiFi, and it’s the master, the multiroom is MP3. The transcoding happens only once in the muso, not at each streamer. I believe this is a hardware limitation in the muso/Qb.

How does a Naim Multiroom Setup Work?

Mu-so’s multiroom solution is based around using an RTP stream driven from the audio bit-clock, the hardware for which is based on a high precision programmable PLL.

The audio that is played for the multiroom stream goes through a software ASRC, Opus Encoder and is time-stamped. At the other end, the system extracts time stamps and then drives the programmable PLL; so, input rate = output rate. Audio is decoded/corrected using an Opus Decoder and then output.

The stream is kept as a native, bit-perfect stream on the master device that is generating the stream, meaning little sound quality is lost through this setup.

The mu-so reference manual mentions the bit rate limitation as being 48kHz over a WiFi connection in the inputs specification. So presumably the same limitation works the other way if the multiroom stream originates from the muso/Qb.

Perhaps the Muso is different, and uses MP3 for multiroom - I don’t know, but the other legacy streamers can multiroom up to 24/48 WAV or FLAC.