I am unable to connect my Uniti Core to my Synology 1517+ NAS to produce a backup for the Uniti Core. Very intermittently I can “see” the NAS drive folders from the Naim app. and even commence a backup but that then drops out. Most of the time I get a message that the Naim app. can’t identify a prospective drive for a backup (“No Drives Found”) or even more bizarrely “Can’t connect to a music drive”! These messages seem a bit random and I haven’t changed any settings on the NAS drive.
Does anyone have recommended NAS settings that would help or is it a Naim firmware problem?

I had this problem with my DS718+ and I changed the SSDP advertisement interval to 180 seconds.This setting can be found in the media server under general settings. The Naim app now finds the synology every time.

Thanks kend. I’ve done that within change so far - I had an initial " … cannot backup to a music store" then “No drives found”. I’ve rebooted the router, the NAS Drive and the Uniti Core as well as resetting the Naim App. (multiple times). I’ll try again in the morning. I can do a direct file transfer using the Mac network lookup and have a sort of copy produced that way (which I can see from the Naim App.) but I really wanted to produce a proper backup so that I could then change the drive in the Uniti Core and use a restore from backup to the new drive. The current drive came from my previous UnitiServe which croaked (the drive was OK).

…I really wanted to produce a proper backup so that I could then change the drive in the Uniti Core and use a restore from backup to the new drive. The current drive came from my previous UnitiServe which croaked (the drive was OK).

Hi Ian, do I understand correctly that you removed the drive from your US and put it in the Core? Did you do this yourself, or was it done by a dealer? Does it work OK - presumably not if you’re planning to change it.
Apologies for the slightly off topic questions.

I omitted a response to your last point. The drive is working normally but as an insurance I was hoping to at least create a proper backup and, for the comparatively low price of a hard drive, have a spare drive ready and loaded with the music. The UnitiServe, when it was functioning, required a replacement CD drive and subsequently a replaced hard drive so I am wary of just soldiering on without a backup process.

Performing twice weekly backups from my Core to my Synology DS916+ (into a folder named NaimCoreBackup) without problems - here’s some screenshots; 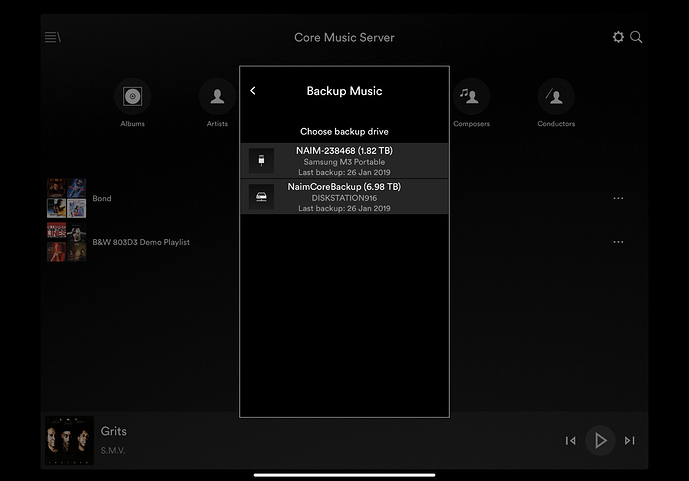 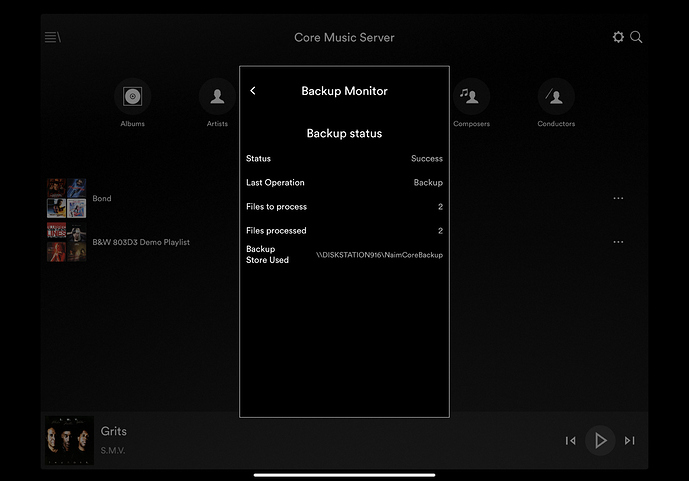 Make sure you’ve set read-write permission for the folder in the DSM software, and that the discs aren’t ‘hibernated’ (Control Panel - Hardware & Power - HDD Hibernation). Either turn off HDD Hibernation or ‘wake up’ the discs by accessing a file on the NAS (movie, photo, music track, etc.).

I also used to successfully back up to my DS214Play before I sold it on.

One thing to note is that all my devices are hard wired into my home network - I simply avoid wireless in order to get rock solid reliability, and only use WiFi for iPad and iPhones.

You can also see from the screenshots that I additionally back up to a Samsung M3 Passport drive attached directly to the Core (‘belt and braces’ backup strategy!), showing that you can set multiple backups if you want.

Hope you resolve the issue soon!

I have turned off HDD hibernation and the folders do have read-write permission. No luck with that so far … I have in the meantime attached a Seagate 1Tb SSD via the Uniti Core front USB socket and produced a backup that way. That drive is almost full but it is some relief. I’ll keep plugging away at the NAS route as I would like to have a routine backup refresh (as I has for the old UnitiServe) to keep it all up to date.

Hi,
Not sure if this will help but I had problems backing up to a Synology DS215j when I first got my Core last year. Amongst other things, I had to set the Workgroup name on the Synology to NAIM and configure read/write permission for the Guest account on the NAS folder being used for the backups.
Ian

That seems to have done the trick - at least it has started a backup. Naming the Workgroup “NAIM” and assigning a storage quota (File Sharing>Group)were the 2 extra tasks I tried. The Group setting needed changing even though the Naim backup folder is under Users (not Group). I don’t pretend to understand the complexities.

Thanks to everyone for your help!