I’m now seriously thinking about ditching my main system comprising…Supernait 2, ND5XS streamer, CD5X + Flatcap 2X for legacy CD, Technics SL1210 + Stageline N.
I’m considering replacing this lot with a single uniti nova (boxing all CDs and vinyl up into the loft).
I find myself mainly using Tidal or the very good Iradio stations these days.
In my (our) bedroom I use a Superuniti BT which is excellent, so I’m wondering what additional benefits does a Uniti nova have over a Superuniti BT??
As I said it’s all more or less Tidal but Qobuz looks appealling (and five quid cheaper) so does a nova support this???
Probably buying new this time…so what’s the latest thinking??? Cheers. Gaz

Does that mean any recent units (ie a 2019) can be firmware upgraded to support Qobuz??? What’s the cut-off point, models older than 2018???
Oh…and can they play Tidal MQA yet???

If it were me I’d just downsize to a 2 box system, keeping the ND5XS and Supernait 2. It’s not much more cumbersome than a 1 box system.

If you feel like treating yourself then an ND5XS2 would be a nice upgrade and would support QoBuz too.

The only issue with QoBuz is that it won’t work on the SuperUniti that you already have, unless you workaround with something like MConnect or use Bluetooth which isn’t going to sound as good.

I moved from an 8 box olive system to a Nova via Uniti and Superuniti. The Nova was much better in every way than the SU and definitely a worthwhile move. It supports Tidal, Quobuz, Chromecast, Roon etc. and will benefit from future firmware upgrades. The sound quality was much more of an improvement than I was expecting. I don’t miss the multi box system at all and my CDs are in the loft where they belong.
Go for it!

Ha ha…that’s more like it Pev!
So… I’ve got a pair of big old speakers (easy load though) which absolutely rock. My favourite listening is definitely live recordings and I like the feeling of ‘being there’…so the volume is normally med-loud to loud…are we therefore saying, flog everything (see photo) and go lifestyle with the added benefit of better sound quality to boot​:+1: 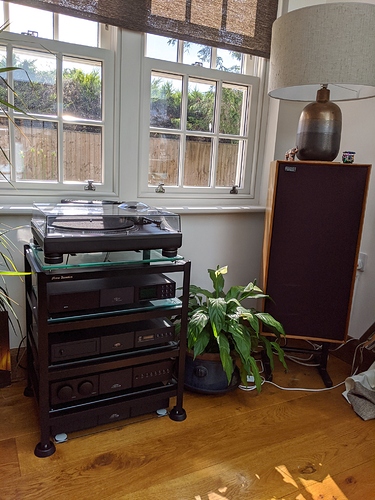 I downsized from 4 box system (albeit Linn) to Nova. (via Atom) and am very happy. No going back

Not too worried about Qobuz on the Superuniti…it’s a bedroom set-up and 50% of the time playing Iradio stations the rest tracks and albums off Tidal.
It’s just the downstairs system that if it’s possible to get high resolution audio off the web that’s where I need it

.
So really interested in hearing more from anyone that has used a Superuniti (or a ND5XS / SN2 combo) and moved to a Uniti Nova. It’s likely if I sell my system to be cost neutral (or very close to) but want to find out if there’s a definite sonic improvement.
I guess my logical route is to call my local Naim dealer and borrow a unit for the weekend.

The only problem there is that you will need two subscriptions, Tidal and Qobuz, which seems like a waste of £20 a month. Perhaps you should downgrade the SU to an Atom while you’re at it!

I went from a Superuniti to a Nova, I was really happy with the Superuniti but the Nova is in a different league with both sound quality and future proof technology.

Does that mean any recent units (ie a 2019) can be firmware upgraded to support Qobuz??? What’s the cut-off point, models older than 2018???
Oh…and can they play Tidal MQA yet???

All new Uniti like Nova (as distinct from legacy Uniti like SuperUniti), the new platform streamers ( NDX2 etc) and second generation Muso/Qb can be firmware upgraded to support Qobuz. Naim does not support MQA and has not so far announced that it is going to.

Sounds like it’s possibly time to move onwards and upwards. Might also be interesting to hear what my reserve speakers sound like on the end of a nova (a pair of ovator 400’s)!?

Anybody tell me how good these sound running Tidal???

Yep - I flogged my 7 olive boxes for enough money to buy a Uniti and a s/h BMW motorcycle!

I had Ovator 400’s on the end of my Nova. I use Tidal and the Internet radio predominantly and it’s awesome, I ripped all of my CD’s onto a Zen mini a great neat solution, couldn’t be happier.

I had a pair of Ovator S-400 speakers with a SN 2 being fed first by a NDX then a NDX 2 and when using Tidal they sounded fantastic, and for a short period of time I had them with Qobuz. I did a side by side between Tidal (which I had used for 2 1/2 years) vs. Qobuz and switched to Qobuz.

The Ovator S-400 are fabulous speakers…

My Ovators sound great with my SU. I’m using Bubble and Minim servers (on the QNAP) to stream FLAC radio stations and Tidal so the SQ is exceptional. So if you have a NAS a SU will be a much more economical option that will net you as good if not better SQ than the Nova.

I have both the Nova and the SN2 with the NDX2 plus power supplies. They are both great systems, But as you have the SN2 I’d be selling the rest and adding the NDX2 to the SN2, as it is better than the Nova. But if I only had a Nova, I’d be perfectly happy with that, so you can’t go wrong either way really. Good problem to have.

That’s the first time I’ve heard anyone say they think the SU is not bettered by the Nova. To my ears it’s quite a significant step up, so it’s interesting to hear that someone has found otherwise.