reading all the news about the Chord 8 Switch, I also realised the standard RPI 3 with my allo digione signature may not be good enough to begin with, so is it worth upgrading to the allo USBridge signature (not for USB) but for the ethernet port isolation and regulation it offers?

Also allo did state in the standard RPI3, the ethernet port and USB are shared.

Which cannot be ideal… anyway for now I have put an audioquest jitterbug in the USB port which seems to make a minor difference… but maybe the USB signature has specially isolated ethernet? I think you own both so please let us know…

reading all the news about the Chord 8 Switch, I also realised the standard RPI 3 with my allo digione signature may not be good enough to begin with, so is it worth upgrading to the allo USBridge signature (not for USB) but for the ethernet port isolation and regulation it offers?

Also allo did state in the standard RPI3, the ethernet port and USB are shared.

Which cannot be ideal… anyway for now I have put an audioquest jitterbug in the USB port which seems to make a minor difference… but maybe the USB signature has specially isolated ethernet? I think you own both so please let us know…

On RPi4s wired Ethernet and USB are not any longer shared bit on the RPi3 they are.

On the RPi 3 that hosts my DigiOne Signature I switch off HDMI, internal sound card, USB bus (and thus also wired Ethernet) and Bluetooth. I only need a wireless connection to my LAN.

I understand that the USBridge mainly makes seens if one needs a clean USB output. There are meanwhile a few interesting alternatives to the DigiOne Signature (Sonore endPoint, Meridian 210, Naim ND5XS2, Primare NP5, etc.) but I am not aware of any serious comparison between any of these alternatives.

I understand that all these alternatives run their own proprietary OS and software and that they are not certified for standard OS. This can become a pain if the proprietary solutions are poorly supported.

The quality of transports tends to be sensitive to the quality of the PSU(s) that power them. From this angle, the ND5XS2 is perhaps not very expensive. But I do not know whether it performs better than a well powered DigiOne Signature.

thanks I could either upgrade to a RPI4 to ensure the USB and ethernet and not on the same bus?

thanks I could either upgrade to a RPI4 to ensure the USB and ethernet and not on the same bus?

Yes, to the best of my knowledge on RPi4 USB and Ethernet are connected to the SoC via separate buses, see https://www.raspberrypi.org/documentation/hardware/raspberrypi/usb/README.md#overview.

I’d started a reply with a few lines, but it’s become a bit of a marathon. Sorry!

I started out with an IQAudio Digi+ on an RPi3B. At that time I was using the standard RPi PSU. DAC at the time was a Musical Fidelity V-DAC2 plus (linear) V-PSU. Interface was via an “el cheapo” Amaz** Basics SPDIF cable. Software was, and indeed still is, MoOde, pulling files over cheapo wired ethernet from a Synology NAS, via a couple of Netgear GS x08s

Like @nbpf, I switch off bluetooth, HDMI and (in my case) Wifi - one can do this from within MoOde. I can’t say I noticed much of a difference, but it does no harm.

Rest of the signal path is an 82, SNAXO, couple of SCs, couple of 250s and the sibbles. Also I often use my Senn650 headphones via a Headline+NAPSC/HC when doing kit comparisons.

The first change was IQDigi+ to Allo DigiOneSig (ADS), still hosted on the RPi3B. PSUs were the standard RPi on the dirty side and another RPi PSU or battery pack for the clean side.

The immediate differences I found were low level detail. I heard things I hadn’t heard before from my usual suspects list of system demos

The next thing was the replacement of the MF DAC with the ever-so-wonderful nDAC. Everything that has been said about this twenty year old kit is absolutely true (including that it gets better as the digital stream gets better!), although I found the overall sound much “darker” than I had been used to, and it did take a bit of getting used to. I also grabbed a DC-1 BNC-BNC cable for a good price, but again, can’t say it made much of a difference.

The next thing I looked at were power supplies to the ADS. As you know, the ADS need two supplies (clean & dirty). I understand that nbpf has a couple of stonking (a technical term expressing approval!) linears(?) doing the business for him.

From the Rose-tinted Piscatorial forum, I noticed that Cuinas Audio had a “loaner” Supercapacitor based PSU doing the rounds, so got it on home demo. Although it had just a single output only, I had it powering both clean and dirty sides, and the result was nothing short of transforming. This time the effect most noticeable were transients and leading edges (plucks sounded “pluckier”, thwacks became real thwacks), but also the stereo image got wider. Interestingly, the effects were totally repeatable, swapping the Cuinas in and out. Cuinas in - leading edges & wide image; Cuinas out - leading edges disappeared and the soundstage collapsed. Weird!
I bought a Cuinas - note that this was just before the Allo Shanti was came on the market.

It then gets a bit hazy - I can’t remember which came next, the Shanti or the USBSig. So I’ll start with the least contentious one

And it sounds pretty d@mn fine. Note, there are no fancy switches, ethernet re-generators (unless you count the USBSig/RPi themselves), or overpriced ethernet cables. I’m not ruling them out though, I did note the English Electric switch demo doing “something interesting” at the Bristol Show in those heady days before Covid-19!

So the current question is “USBSig or RPI4” to host your DigiOneSig.
I haven’t got any RPi4s at this point, so I cannot compare the two. So my answer would have to be try the RPi4 first, coz it’s much cheaper - if you find that it doesn’t float your boat then the USBSig is waiting in the wings.

I don’t know whether Allo have a cheap acrylic case suitable for an RPi4+DigiOneSig, and if you do eventually go the full USBSig+DigiOneSig route make sure you get the correct aluminium case - there are two variants! Also, with the USBSig+DigiOneSig the dirty PSU goes direct to the USBSig; as you know, on a DigiOneSig/RPi setup, both PSUs go to the DigiOneSig which then routes the RPi supply through the middle board to the RPi. Now if your DigiOneSig is quite old, it may require a small modification to remove or short out a blocking diode on the middle board (possibly another on the top board, if it’s really ancient) - otherwise when you first power it up all you get is an ominous silence!

But first I would seriously up the stakes in the PSU game.

Oh, and get an nDAC

I recently changed my Allo digione Sig player (about 12 months old) to use an Allo USBridge Signature rather than the existing RPI3.

I bought it with the new metal box which is a whole lot nicer than the existing plastic one. It certainly looks a lot better (if that is important, not really in my case). I think it sounds a little better, but it’s not a massive improvement.

It was easy enough to swap the digione sig from the old case into the new one, plugging it into the USBridge.

The power supply was a (tiny) bit of a pain so I had to modify the case and feed a USB lead out of the digione sig and have this trailing rather than using the supplied USB to 2.1mm barrel connector (which didn’t suit my PSU).

There was one potential hardware ‘gotcha’ depending on the age of your digione sig where you might need to bridge over a diode on the allo digione signature board. I didn’t need to do this. I can’t find the exact URL that discussed this but Allo support are aware of it and were discussing it on audiophilestyle forums. I saw @suzywong involved in this discussion so maybe a better source of information than me!

I had to play with the configuration (I used dietpi) and disable I think Squeezelite or Shairport-sync before it worked.

Apart from that plain sailing and it’s been in use for four or so weeks.

Sadly… I think I got a better improvement in SQ by moving the macmini hosting my music files into another room, on another ring. I really must get around to running another supply exclusively for the hifi.

Yep, that Burmese cat does get everywhere!

Mine needed the middle-board mod, but not the upper board. But it was something of a shock when I’d first dropped the DigiOneSig onto the USBSig, wired up the power correctly and got no lights on the bottom board…there was no sound either.

Obviously, I got it going by taking both supplies to the DigiOneSig, but there were definitely moments of “Oh ****, I’ve blown it up; I knew should have brought my anti-static wrist strap home from work”.

I have a couple of photos which show the offending diodes, which I can post here for @Analogmusic should he need them.

If you can kindly post the pictures you mentioned

All the lights lit up properly on mine, but when there was no sound and it wasn’t available as an endpoint in Roon until I disabled ‘stuff’ I had a similar feeling… ‘bloody hell, why couldn’t I just leave well alone???’

This one is the top board. on mine, the diode had already been replaced by the wire link: 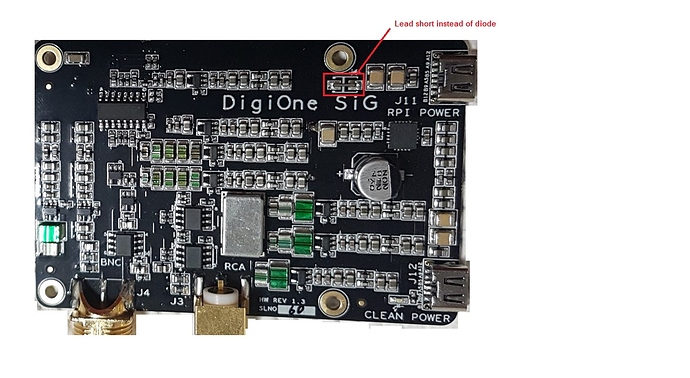 This is the middle board: 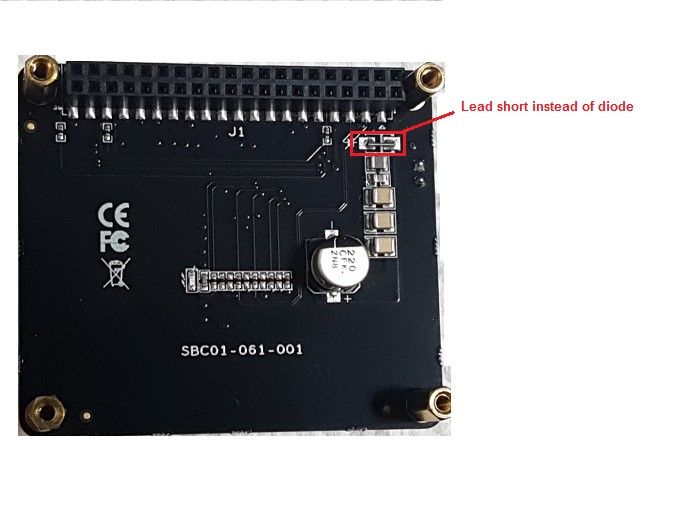 This one I had to do myself. If you are fitting an existing DigioneSig onto a USBridgeSig, then you will have to take the pair apart anyway because the spacers are different (or at least I had to). When I modded mine, I left the SM diode in place and merely soldered a loop of TCW across the terminals.

And for the removal of doubt or transgression of forum rules. no nDACs were harmed in the course of the above mentioned "wielding of the soldering iron!

Ah, that’s software configs for ya!

@Analogmusic’s DigioneSig may well be more recent than mine and the mods may already been done during manufacture. But forewarned is forearmed, and could mitigate that sinking feeling you get when you’ve built up the case, and power up up for the first time…and nothing happens

thank you … much appreciated.

About the PSU I already got a Allo Shanti PSU…

but to my ears the big change was disabling wifi- and going to ethernet.

Not sure why, but the wifi signal was quite weak in my room, so that may be the reason.

Allo themselves do say to connect their devices on ethernet…

I noted this on google chrome cast audio too, there is an adapter that allows one to use it with ethernet, and the gains were similar…more musical…

I noted this on google chrome cast audio too, there is an adapter that allows one to use it with ethernet, and the gains were similar…more musical…

Indeed, and it starts playing music much faster! Almost instantly.