And I was in heaven.

But I got hold of a NAC82, had it serviced and installed it

The sound changed more than I would have expected. The open, easy and attractive sound I had is now fatiguing. In fact yesterday I listened to it for a few hours and got a mild headache. I’m not good a describing sound but it’s almost like there’s a frequency band that has increased in intensity which I might describe as akin to feedback (it doesn’t sound anything like feedback, it still sounds just like music but for a reason I’m incapable of communicating that’s what comes to mind). And the bass seems to be lacking. The sound is now less and involving and what I might call intense and uneven. Anyway, I don’t like it.

The weird thing is that I recognised this as soon as installed the pre-amp… and then a few days later it seemed to have gone and it sounded great (in fact really great… an obvious and not subtle upgrade on the 102), but then yesterday it was back, and in spades.

Caveat: I don’t have golden ears. For me sound/music is an emotional thing and I can’t for the life of me do hifi tests in shops. I just don’t understand how to listen critically.

I rang Naim support and talked to a Henry, who ultra-surprisingly has done the same upgrade and had a similar experience. He told me I should run the 82 for a week or so non-stop, as he had, and with luck it’d sort itself out. He’s effectively saying the serviced components need time to bed in.

I’m very interested to hear thoughts about this from those with any experience. I’m currently playing the system 24/7.

I assume the NAC 82 was serviced by an authorised dealer/agent ?

An 82 should give all the upgrade benefits over a 102

Yes it was. Sorry that was not clear.

I would give it a few weeks to settle since it was just serviced. It sounds like break-in to me. Naim gear goes through ups and downs after a service. My 250DR had days of being forward and tiring, other days of no bass etc settled after 3 weeks and continued to improve over 3 months

I would give it some time as suggested by Henry.

I had a similar experience with a 252 upgraded from a 282 which was bought freshly serviced. It sounded off (mostly) and on (occasionally) for quite some weeks. I was on the cusp of searching for another 282 it was so noticable.

It now sounds sublime and was worth the wait, I’m sure the same wil happen to you.

I’d always been sceptical too as to the idea of run-in until this experience which has changed my mind.

It’s worth rechecking all the connections including speakers just to see if everything is in order.

All the above advice is good and you should be confident that the 82 really is excellent. I too would double check all connections and speaker polarity and then give it a week. It should come good.

Thanks very much for the advice. I’ll wait.

When I replaced a recently serviced NAC102 with a newly serviced NAC82 last year, the improvement was immediate, and the most impressive upgrade I have done. I guess you have tried another input on the Amp. Definitely check all the connections. Perhaps power off and reinsert cables 5 or more times

The 82 should be an obvious improvement on the 102 - but it will be ‘different’. Maybe you’re accustomed to the one and taking time to adjust to t’other…

I don’t think so, as it hurt to listen to it for an afternoon. I actually had a mild headache at the end.

I’ve run it non-stop for a day and then I inserted and re-inserted all the leads multiple times and am using the Aux input instead of the CD input… result: very audible buzz coming out of the speakers.

I replaced a serviced 102 with an unserviced 82, it took just 30 minutes to come on song and sound really good, producing life-like realism to the sound that the 102 couldn’t do.

@MC2
There’s clearly something wrong here. A trip to the dealer perhaps?

I really don’t know how the NDX sounds eventhough I’ve owned one in the past. That said I now have a NDS/555PS DR and 82/250DR. I find the digital front end can have a tendency to glide into the realms of harshness quite easily. It all varies with recording and/or streaming service. Spotify is the one most frequently becoming harsh while Qobuz is less prone, especially high res. This is in my system with my hearing and preferences ofcourse.

The more revealing the system, the more unforgiving to source material. The challenge is to get it just right between transparency and being able to enjoy the music you love.

Worst case is when you assemble a system that makes you listen to only well recorded music.

“…very audible buzz coming out of the speakers…”

Something is not right (in that configuration) - stating the obvious.

I also went from a 102/180/hc to 82/180/hc and it was a joyous upgrade. Something is wrong in your system. Yes, it will take a while to come fully on song but it should not be causing you anxiety.

I second what others have said and urge you to double and even treble check your connections. Have you got the appropriate blanking plugs in place. If everything is correct, a trip to your dealer might be inevitable. I’ve included the image below just in case: 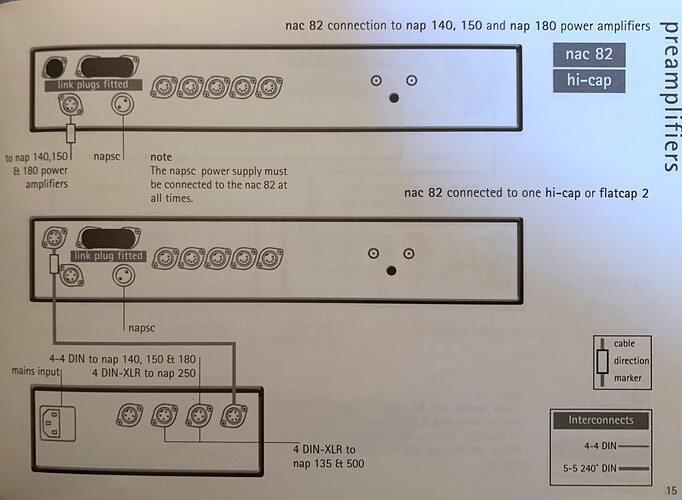 Don’t despair, when it’s right, it is a joy to listen to and to own. Persevere.

Hi MC2, loads of good advice given, one other thing you might also try - make sure the mains leads and signal leads are as separate as possible, one cm is the scale I’m talking about. I did an ‘upgrade’ putting in a second hand Super Cap in to power my 282, which was a significant improvement over the 102 it replaced by the way, but I was really disappointed by the SC as while parts of the sound obviously improved, overall the sound was edgy and tiring. I was considering returning to my HiCap again and returning the SC, then someone on the forum suggested making sure the mains and signal leads were separated - it made all the difference!
I had installed a Hydra mains leads some time before which had made a significant improvement to the sound, but I had not made sure the leads were properly separated afterwards. It was clear the SC was exposing what had probably been there with the HiCap but not as obvious. Best wishes Amer 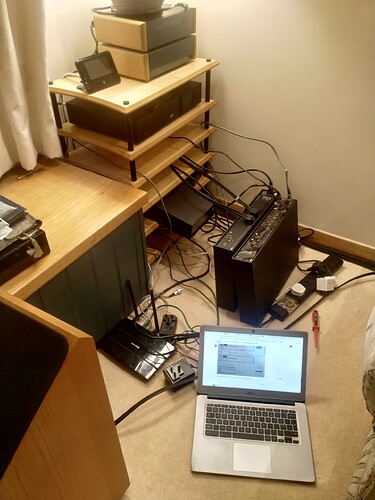 @Graeme Thanks for the diagram.

I thought I was sure how all this connected up but there is one thing, plain on the image you provided that is confusing me.

As far as I am concerned the hicap is used to power the NAC82 but the diagram indicates that it can also(?) be used to power the NAP180… however, on my NAP180 there is no socket for a seperate power supply. Apart from the conventional mains connection there is only one other socket… for the pre-amp.

Am I right to be confused?

The cabling arrangement should be exactly the same as the 102 with the exception that you need a link plug in the 82 if you are using a single Hicap and therefore one SNAIC.

This assumes that you have genuine Naim cables as some third parties supply cables that doesn’t route the signal through the Hicap.