Hello,
My first post. I’m writing to kindly ask your opinions on whether upgrading my system to a Uniti Atom would be likely to improve sound quality.

I started thinking about a change as my current system’s usability is probably the opposite of the Uniti Atom’s “Just add speakers” proposition. I felt I could do with a bit more ease-of-use in the future, however ideally there should also be a sonic benefit.

My current setup:
I have Audirvana running on an iMac. It plays mostly Classical music from either a Synology NAS or qobuz. The application connects to a Chord Poly/Mojo streamer/DAC combo via UPnP. The Mojo DAC feeds into a Sugden A21a Class A amp, which powers Tannoy Stirling SE speakers.

Would you expect Uniti Atom to improve sound quality if it replaced Audirvana, Mojo/Poly & the Sugden?

Thank you for any insight.
Tom

I’d be surprised if it didn’t sound different. But whether the Atom sound would be “better” will be a matter of personal preference, particularly with classical. I’d strongly recommend an audition, ideally at home, rather than just buying blind.

Thank you. Yes, I suppose that is the way forward.

There is the Atom HE variant (I think that’s the nomenclature), which has a headphone amp but not power amp for speakers, whibch would let you keep your current amp, if its the front end you want to change.

However, I use Audirvana running on a headless, dedicated, late 2012 Mac Mini, fully optimised setup as per Audirvana recommendations, into Chord Dave DAC, with all my music stored on that device - no streaming across a network. It holds its own against more expensive streaming stores such as Melco N1.

Interesting that you use a NAS, and Poly. Poly is a streamer, and can do essentially the same as Audirvana - what made you use A instead of P? Personally I find A’s library handling annoying at times, and likely one day Will change. Chord’s Ugo/2go combination, which adapted Poly to fit Hugo and then adds other DAC connectivity, is one that I intend to look at more closely - it’s si gular advantage if it sounds at least as good as Audirvana and if its library software is at any better, is that I could stick the entirety of my music collection on a couple of micro-SD cards, add a Hugo and headphones and take my music anywhere in the world when travelling, and simply plug in at home again after a trip.

That leads me to software. It could be the make or break of any streamer - classical music is often not well catered for. Some streamers allow your own choice of library software: Audirvana of course doesn’t, being both library and rendering combined. Something about which to ask specific questions/experiences of users of different library software with classical music.

Finally it is worth noting that the DAC is the key ingredient in terms of how good digital replay can sound. I have no experience of the one in the Atom. To me Chord Hugo(1) that I had before Dave was significantly better than the DAC in the original ND5XS - but of course Atom’s DAC is different. Given that you’re coming from Mojo, @Analogmusic is one member who has experience of it and at least some Naim kit, and may be able to comment on it relative to some Naim DACs, though I don’t know if he’s heard the Atom.

I would keep the mojo fronted system you already have.

you could try out some vertere interconnects between the mojo and the sudgen.

I’ve moved from a RPi based streamer (Allo Digione) into a Chord Mojo into Nac 72/hi/140 into SBL’s.

I was a bit done with maintaining the RPi and to make sure that the Mojo was charged. Kids hijacking the charger for their phone left me more than once without good audio in the evening.

My wife and I had a good chat and we bought the Atom HE, we added a Nap 200 and thats what we are running now.

The ease of use is splendid. Its the support for Qobuz, Spotify, Apple Airplay & Chromecast which makes it so easy to use. Soundwise its as satisfying as the setup before, maybe better.

If you have the spare money, and want the extra ease of use, its the way to go.

I cannot comment on the sound quality of the Atom itself, and how it drives your Tannoys but our Atom HE is definitely good. We got the HE so that the Power amp can be improved if needed. Simple 2 box system, no fuz just works.

Oh, the Mojo is fantastic too …

The Poly came as a late addition into my setup. I used to connect the Mojo DAC to the iMac via USB. When Chord launched the Poly I bought it for the use case you described with regard to the 2go, mobility, or, I should say, portability. It’s a great solution for that purpose nowadays, after the firmware has matured (only took them a few years)

Using Poly is unnecessary with Audirvana, true. I think I continued using it after trying it out, just because it was so versatile and sounded just as good via UPnP as Mojo connected to the iMac directly via USB.
The Poly doesn’t have its own app. It uses 3rd party DLNA apps like 8Play, mconnect or Glider. They work well enough for playback but offer nothing in terms of library management.
I like Audirvana’s feature set well enough, also for Classical, only it is lacking stability. I haven’t switched to the subscription-based Audirvana Studio yet, it may well be that it’s more reliable today.

I think I wouldn’t seek to combine Atom HE with the Sugden. If I changed I’d go for the reduced clutter and convenience of a one box solution.

The ease of use is splendid. Its the support for Qobuz, Spotify, Apple Airplay & Chromecast which makes it so easy to use. Soundwise its as satisfying as the setup before, maybe better.

That’s exactly why I’m tempted. I’m a bit tired of fidgeting with Mojo/Poly, Audirvana and the Sugden amp. Once everything is running it works and sounds fine, but…

I really don’t know if it would improve the SQ, but I suspect the character of the sound would be fairly different to your Sugden. Seems a shame to change that if, I assume, you like its presentation?

I get the ease of use point though. Is adding a ND5 XS2 something you’d consider? Would remove all the faff of running the Mojo etc, which I totally understand.

That’s a good idea. The Sugden is by all accounts a lovely amplifier, and will sound very different to an Atom. If you like the overall sound of the Sugden with your speakers, getting an ND5XS2 could be the way to go, and the ND/Sugden will almost certainly sound considerably better than at Atom.

I was also going to chip in with the suggestion of ND5XS2 if you’re going to keep the amp. With an Atom HE you’d be duplicating the preamp and the ND5 might well give you better sound for less money.

The Sugden sounds very nice, yes. It feels a bit like a “gas-guzzler”, though. It runs extremely hot. I dare not check how much power it consumes. Which, in turn, makes listening sessions kind of a special occasion. You wouldn’t keep it running to listen to something in the background, while busying yourself with something else.

I will definitely have a closer look at the ND5XS2.

When first into HiFi in my teens I wanted a Sugden A21a very badly. I think it was the black cased one with orange power button. That, or a musical fidelity A1. But mostly the Sugden.

Yes, that’s it, the black one, although with a standard power button and a small orange light next to it. I only bought it maybe 5 years ago. It had been sitting in the warehouse of a dealership in Duesseldorf/Germany. Had never been unpacked before, although production had ended in 2007.

I was looking for a new amp at around 1,000 Euros at the time, after my trusted Pioneer A-616, which I had owned since 1987, had started passing out at times. I had set my eyes on a Creek Evolution 50a, as it fitted my budget and had been reviewed favourably. They hooked the Creek up to some very expensive speakers for me and exchanged it with the Pioneer for comparison. I couldn’t make out any difference and said I’d have the Pioneer repaired instead.

Then they brought out the Sugden. It looked as 1980s as my Pioneer and I didn’t think much of that back then. I pushed that aside after hearing it, though. It just sounded so much better than the other two.
So, I really like it, apart from he ridiculous heat it emits.

This thread needs a photo, quick!

If it was me I would audition pretty carefully before changing your amp, that’s a great story, and sounds like you have a lovely piece of kit in your Sugden. 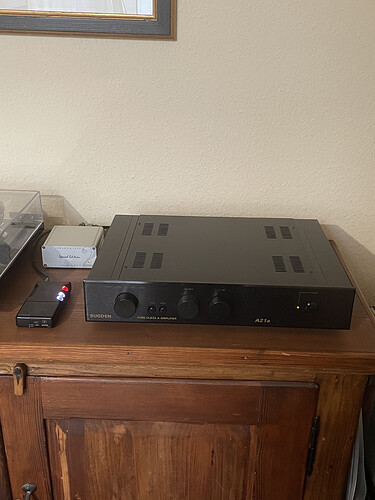 I think I had an earlier version in mind, but that’s very very nice regardless