Alternate title: “I said no more upgrades, but…”

This past Friday I paid a visit to a well known audio trading website and as it turns out Codell Audio (my dealer) has a pair or preowned Harbeth Monitor 40.2 40th Anniversary Special Edition speakers in mint condition for sale. The price is fair.

As I said before in another thread, I used to have Monitor 40.1s with my then 552 / 300 non DR system about 3 years ago. For some reason I was never able to make them work in my room - the highs and medium were to die for, but the bass was boomy. After 8 months or so and having tried everything I could think of, I reluctantly downgraded to Super HL5 Plus. That resolved the boomy bass issue, but I’ve been missing the Monitor 40’s magic ever since.

Since then, two things happened: first, I had the 300 serviced and DR’d and it has a more extended yet tighter and better controlled bass. Second, knowing that several domestic users were having that problem with the Monitor 40s, Alan Shaw ,Harbeth’s CEO and designer, revised the speaker (now called Monitor 40.2), mainly to make its bass delivery tighter, more extended but not as proeminent. Those 2 factors combined have made me wonder if my now 300DR could make the new Monitor 40.2s work in my room…

In short: an unqualified yes.

I’ve listened to the 552/300DR/Harbeth Monitor 40.2 Anniversary for almost 48 continuous hours and my findings are:

In a word, the Monitor 40.2s make the Super HL5 Plus sound like a tin in my system and in my room. Now I have to try and get the financial model work - otherwise the return to reality will be rather brutal! 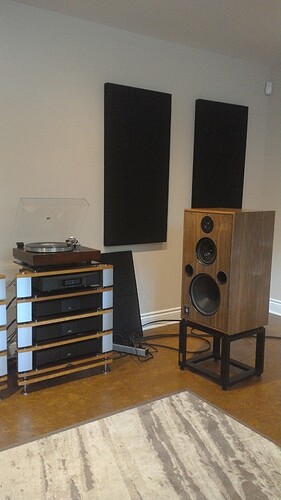 Sorry for the picture quality, BTW

Congratulations on the find and the home demo…

…I hope you find the right model to make this work for you Claude, it truly sounds like an end game keeper for the system and you!

Hi Claude, I am using SHL 5 plus and beeing quite happy. I am using 52/SC/135 olive. What exact is so better with the 40.2? What exact size is your room? Best regards, Alexander

In short, take everything you like with your Super HL5 Plus and make it significntly better (normal, mind you, as the Monitor 40’s MSRP is more than three times the SHL5’s).

More specifically, I always loved the SHL5’s midrange, the organic feeling it gives to voices, strings or piano. The Monitor 40.2 sounds even more real, lush and beautiful. In my room, the SHL5 Plus sounds rather thin with many recordings; the Monitor 40.2’s bass is substantial and rich, making music more impactful. The SHL 5 Plus has fantastic resolution, it shows lots of details; again, the Monitor 40.2’s level of detail seems endless, IMO it rivals that of the best electrostatics.

Yesterday evening I was listening to Mendelssohn’s piano concertos, I realized that with the Monitor 40.2s music becomes simply imposssible to ignore, it grabs my attention like a live concert does. That I think is the result of all the above elements combined.

Apart from the stellar sound quality, the M40.2 looks a lot more elegant than the SHL5 Plus. It looks great in your room.

16’ x 24’ is a large room and the M40.2 will surely work and sound a lot better than the SHL5+ in this space. In this respect I can relate to the thin or lean sound of the SHL5+. About 3 years ago I had the SHL5+ in a very large lounge (26’ x 70’ with openings to other rooms) and the sound is as what you have described. I currently have my SHL5+ in a much smaller space 10.5’ x 23’, speakers on short wall and the sound is just nice, not lean or thin but a full midrange and bass. In summary, SHL5+ for small to medium sized rooms, M40.2 for large rooms if you have the space.

I have listened to the M40.1 before and although it is good, I believe the 40.2 is a major step forward . I find the 40.1 to lack clarity and air, and the bass is a bit uncontrolled just like the SHL5 non-Plus. The SHL5+ is still a very good speaker but when compared to the TOTL Harbeth, there really is no comparison. Just look at the drivers of the 40.2. The small 8" midrange driver of the 40.2 is actually the main midrange/bass driver of the SHL5+. The 40.2 has the dedicated large bass driver and the cabinet volume is a lot larger than the SHL5+.

With regards to the look, thank you. The 40.2s I have on home demonstration are 40th Anniversary edition, wit a special walnut veneer and their fit & finish is impeccable.

The 40.2s I have on home demonstration are 40th Anniversary edition, wit a special walnut veneer and their fit & finish is impeccable.

It has to be the special walnut veneer which made the 40.2 looks exceptionally good. The cherry finish on the 40.1/40.2 doesn’t look as elegant. In contrary, the SHL5+ looks better in cherry than walnut, to my taste and preference. Yes, I recall the fit and finish on the 40.1 to be great as well. The black badge of the Anniversary on the 40.2 makes it even more exquisite.

Really nice looking speakers, I much prefer the Walnut to my Compacts 7 eucalyptus.

Your system is one to aspire to.

I had a number of Harbeth speakers including a pair of Eucalyptus Compact 7 ES2s. I loved them and I think the ex Ms. ClaudeP still has them.

I always struggled with SHL5+ and my Naim. Sounded rather thin and very picky on what I listened to easily causing fatigue. Sure the mids with recordings that suited them created magic but it more often became a struggle in my setup. Changed to Tannoy legacy Eaton and never looked back.

Good on you Claude, they look fabulous! Enjoy Peter

They do but some users are happy with 35 wpc amps able to deliver high current.

They seem very happy too in the 552/300DR based system, anyway

Hi Claude, thanks for that. I will try to hear the M40 after Covid lockdown.
Best regards, Alexander

If you do make sure it’s the 40.2 - different beast altogether. Let me know what your findings are when you do

Hey @ClaudeP, I notice that you have the tontrager stands, I have the same!

Do you ever notice that sometimes the Harbeth 40.2 shifts its position on the stand? Mine do, if I play some heavy rock music ! I think I will need put some the blu-tack underneath the speakers to prevent it from moving from its optimal position (as recommended by the tontrager manufacturer).

I haven’t noticed any misbehaviour of that kind from the 40.2s yet - mind you it wasn’t very likely to happen with Stacey Kent or the Alban Berg Quartet…

Seriously, thanks for the heads-up, I’ll keep an eye on them. BTW what kind of amp do you use with your Monitor 40.2 if I may?

what kind of amp do you use with your Monitor 40.2

I am looking to upgrade my DSM/2 to the Organik version soon (with an extra $17 K tradein).

You will enjoy this review by Paul Seydor in The Absolute Sound: 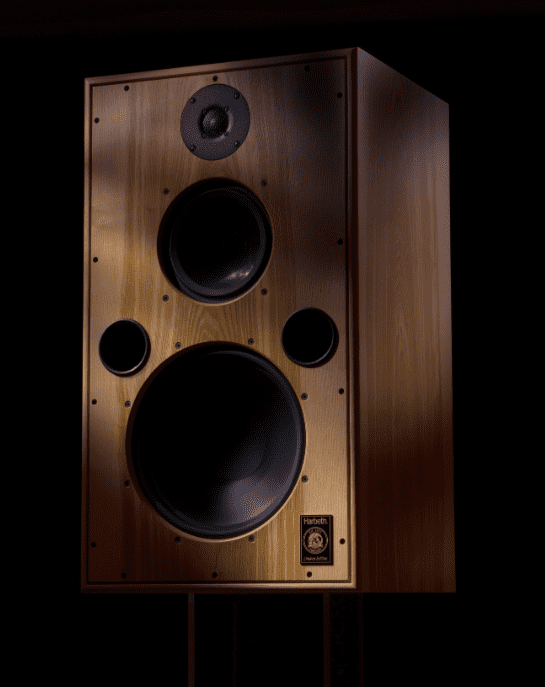 I read it Charles and I agree, it’s a very good review.

The reviewer (Paul Seydor) and I listen to the same music genre (mostly acoustic, classical, jazz, folk, etc. but also a wide range of everything else) and we seem to prioritize the same things, so the review was part of my rationale when I decided to home demo the Monitor 40.2s.

But of course the fact that I had loved the previous version (40.1s) and was missing them was the determining factor.