The Qute is at the moment the weakest link i guess.

There is an apportunity to upgrade to a NAC-272 at the moment, ex dem and trading in my Qute. It is obvious it will perform better than my Qute 2.

Little hessitant to pay the extra outlay as the upgrade was not planned yet. On the other hand ex dem, so not much millage.

Only you can decide if it’s worth your money, but I think you’ll find it a nice upgrade. If you don’t want to spend too much, I think the 172 also pairs very well with the 200.
Now might also be the time to consider what your long term plans are. If you think you will climb further up the ladder in future, my preference would be for a separate streamer and preamp (or streamer + Nait) rather than streamer/pre with separate power amp.

How far apart are both streamer/pre amps in terms of sound quality? As there is also a NAC 172 available.

As long as it’s affordable I wouldn’t hesitate. This will make a very nice system.

I they where at the same dealer i would ask to put them side by side. Unfortunataly the NAC’s are both on an other side of the country

The dealer selling the NAC 272 has offered to put the Qute and de NAC side by side on his Nap 200DR. Home demo will be diffucult due to traveling time, wich maken it diffucult for me to deside as i’ve learnt in the past to always home demo. Or is it a no brainer?

I don’t think there’s any doubt that the 272 is going to sound better. If you think the 172 will be a potential option, I would ask the dealer if you can buy it with the option to return after a home demo. It has been discontinued for a little while, so dealers should be keen to shift them now.
The safe bet, though, would be a 272 if you are prepared to pay more.

Any need for a second system somewhere in the house? The Qute makes an ideal option if you don’t need to trade it in!

I’m steering toward the NAC 272 at the moment. Soundquality wise the best option as mentioned and better investment in the future i guess due to one less time trading in equipement.

I will trace in the Qute as i/we don’t need a second system at the moment.

Thanks for the replys and help.

I listen to my ‘qutes more and more. They are in my study, kitchen and bedroom. There are times when I don’t want to turn my main system up so that I can hear it in other rooms. Today is the exception … see what I am listening to thread

I think you will love the 272. You’ll only wonder why you left it so long.
I would also hesitate on selling the Qute, as I sold a couple on and really which I hadn’t as they are ideal for the office.

Finaly pulled the trigger today. After my vacation i will demo (and collectie) the NAC 272. Made arrangements with the dealer that after purschase i can try the NAC 272 at home (as the dealer is a two and a half hour drive away).

Will keep you posted.

I will be demoing on Saturday, i am getting verry curious now.

In addition:
A secondhand Chord Shawline din din 4 pin (snaic 4?) did pop up. Will this make a (big) difference with the Shawline RCA to Din i already own? And is it the right cable to connnect the NAC 272 to NAP 200?
Bought second hand at a (bert) good price so not much of a big loss in investment when reselling i guess.

One thing to think about though is that the Unitiqute 2 has FM/DAB built in whereas with the 272 it’s a not retrofittable extra cost factory option. If you use FM/DAB then you need to make sure the ex-demo 272 already has it.
Best

Your 200 would originally have been supplied with a Naim DIN lead, so if you have that, I would give it a try. Either way, certainly worth trying a DIN to DIN lead, but if you’re going to spend money on it, I would set it up with what you’ve already got first and take it from there. 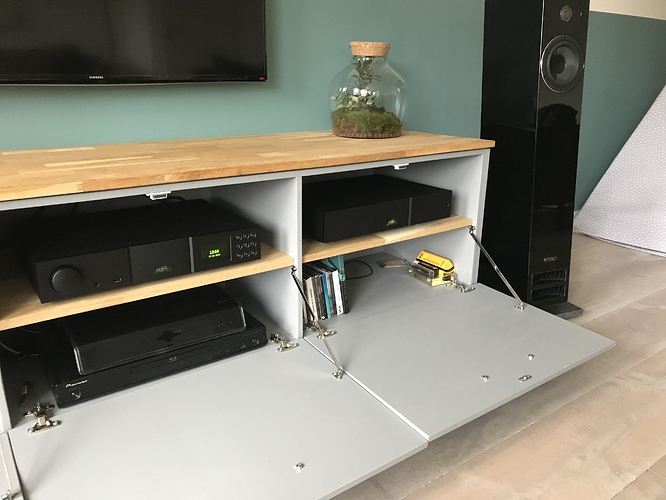 Had the demo yesterday. First getting accomstumed to the enviroment and speakers by playing my (ex) Unitiqute via a NAP 200 and a pair of Russel K speakers in the dealers room.

After swithching to the 272 the difference was emidiately clear.
More control over the poweramp, more detail, more quieter background etc. etc.
Audiences seem to be individual people instead of 1 crowd and there is more presence of the enviroment (a concert hall is more a concert hall)

Music also to be more “analogue” and more flowing.

Glad I made the move! Thanks!