Using Windows 10 UpNP I am streaming flac files to my NDX.

Is there some way I can change this so the tracks are ordered correctly (hint, re-tagging or renaming files is not an option)?

I am having trouble believing just how staggeringly awful the Naim app is at streaming locally held files. UnPN seems a terrible way to do it, and one result is that both the speed and functionality are very limited. How do people get round this (or is the streaming refactored for later Naim streamers?)? I am vaguely aware of Roon but I’m not willing to facilitate another subscription model and do not want to add yet another layer to my music system.

At this moment my best bet seems to use a Logitech Touch connected to one of the NDX digital inputs but that almost seems criminal when Naim streamers are so expensive… and, although I’m not yet certain, it’s seems likely sound quality would be compromised.

This is nothing to do with the Naim app
I’m not aware Windows 10 is or has a UPnP & suspect that where your trouble is
To use a Window based computer you will need to install something like ‘Asset UPnP for Windows’
www dbpoweramp (.) com/asset-upnp-dlna.htm

I used Asset UPnP on a NAS briefly and had no problem with track numbers. You didn’t say what UPnP server you are using, are you using the built-in one of Windows? If so, it’s probably a limitation in the built-in server, try a real one. (Asset and Minimserver being the widely preferred ones)

As for UPnP as such, I don’t see the problem with speed, it only serves audio files, speed is hardly an issue. And functionality seems IMHO best left to the endpoint and IMHO the data server is not the place to implement it - though with Asset et al. you configure it on the sever with a web browser and from a UI perspective it’s not very slick, though workable. But it could be done better, it’s no a problem of the UPnP protocol really.

The Naim app is what it is (and getting better) and makes many people happy. It depends on what you want, and you didn’t write what this is for you. In any case, see the “Naim app is janky” thread and the feature request thread.

It’s probably hopeless to expect rich database features from player apps and Roon is the solution for me. If you need the features, personally I don’t see the price an issue in the context of typical systems on this forum. I paid one-time 600 euros for lifetime

I use UPnP server apps: Minimserver and Asset. They are on my NASs but I think they’d also run on a windows computer. Tracks are in the correct order albums can be sorted by Artist or Composer or Genre etc …

Each week a new thread on the awfulness of the Naim app seems to occur. All I can say is that I don’t find it awful at all. It’s basic, but enables me to find what I want to listen to with just a few taps of iPad or phone and play the album or selection of tracks I’m after. It’s all I want and works speedily and pretty seamlessly for me.

Sorry if this sounds smug; it’s not meant to.

There is one, it is apparently automatically enabled when network discovery is enabled. I would expect it to be junk, though, so agreeing that it’s most likely the problem

I was not aware that Windows had that, I just tried it & yes it’s junk.
Asset UPnP has a specific Windows version & as we all know, Asset is one of the top UPnP performers & users choice.

Thanks. I did suspect that it might be that Windows 10 implementation of UpNP (DLNA) was rather basic. I shall give Asset a go.

I come from Logitech Media Player. If anyone’s used that properly they’ll understand exactly where I am coming from when I say that Naim’s offering is slow (list, search) and lacks functionality. In comparison UpNP is very basic and Naim’s implementation and method for streaming local files out of the arc. This is why I’ll probably end up connecting a Logitech Touch to the NDS. (Oh, and with Logitech’s offering all the work is done on the server, which is definitely the best place for it.)

Another subscription? Spotify, Tidal, Roon… and more. It all adds up.

There is a UPnP plug-in for the Logitech Media Server. I use the LMS ChromeCast plug-in for my Mu So 2. It also works with several other ChromeCast and ChromeCast Audio devices I have.

I use MinimServer on my NAS and the Naim app works fine on iPad and Android.
I used to use LMS before I had the 172 and used the Qnap LMS Package

I was hoping Phillipe’s UpNP/LMS bridge would work for the NDX but no such luck. I too use it extensively for Chromecasts. It would definitely be the ideal solution.

I’ll try Asset (and/or MinimServer) and compare the sound of pure NDX with Touch as NDS digital-in.

GadgetMan
I would prefer to use the LMS UpNP server but I have three distinct LMS sound libraries and the LMS UpNP sever mashes them altogether… which does not work for me.

Late Addition:
In a search on this forum I found a previous post here by a bloke called trickydickie who says:
“I use lms-to-upnp for my bridge. No issues with an NDS, I have used it for just over a year now.”

I’d dearly like to ask him if he uses Phillipe’s LMS/UpNP plugin but can find no way of messaging him. Is there a way I can message users through this for forum (bearing in mind my account here is quite new)?

To ensure someone gets a message, put an @ sign before their name - @trickydickie can you help @MC2 ?

I use Phillipe’s lms-to-upnp contained within Logitech Media Server to allow my NDS to use Roon.

It works really well and is 100% reliable as long as I don’t meddle!

What I haven’t done is used Logitech Media Server as the music player, only Roon.

If I were you I would get a decent UPNP server up like Asset and running, configure it correctly and you should find the Naim app more than adequate. It’s certainly quick and easy to find your local music.

Of course if you use streaming services and fancy the aggregation of you local and streamed library along with excellent music discovery and a more modern, rich interface Roon will give you this and used with lms-to-upnp it provides an excellent way to modernise a legacy streamer.

Wow and as if by magic, up he pops!
Thanks @gadgetman.

@trickydickie
Thanks. The holy grail for me is to use LMS to control the NDX and as I have just learnt that Phillipe’s LMS/UnPN plugin has lots of parameters I am going to have a fiddle to see if I can get to work.

I am wedded to LMS, especially as I currently use it to control over 25 devices and it has been so compfrehensively updated recently (includes Spotify, Tidal integration, split library view and a super-duper new Material web skin)… oh, and it’s free! :-).
Roon is a route I definitely do not want to take…

And I think it does all this…

“Of course if you use streaming services and fancy the aggregation of you local and streamed library along with excellent music discovery and a more modern, rich interface Roon will give you this and used with lms-to-upnp it provides an excellent way to modernise a legacy streamer.”

That’s a lot of rooms you must have. How is your Mum the Queen

It feels like it should work, it’s the primary aim of the plugin and keeping everything within LMS should be simpler.

Firstly you need to create the config file, if using LMS then you can access this in the plugin’s config page. Click on the create button.

When it’s done this a list of discovered players should appear lower down the page. 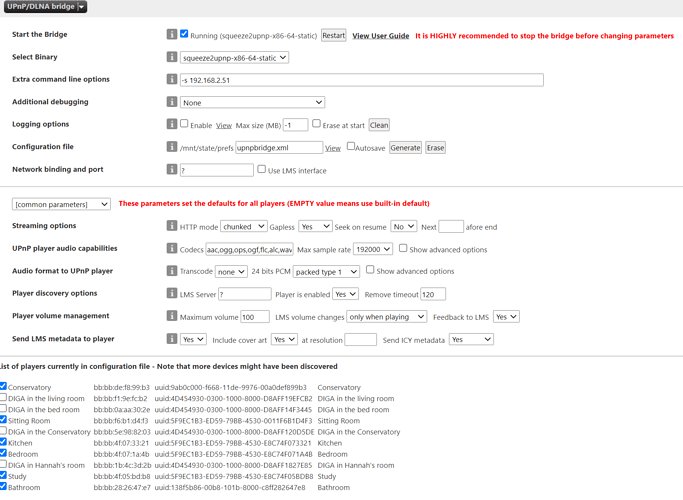 Note: you won’t need the extra command line options as this is used to point the plugin to my Roon server.

Here are the device specific settings for my NDS, not that much has been changed.

As you have 25 devices you may find that you need to keep the common configuration simpler and then apply specific settings per device. For example the max sampling rate and codex supported could be moved from common settings to each device if required.

What I have shown you work for Roon. Roon sees lms-to-upnp as a Squeezelite device.

That’s great. Thanks very much indeed! Will have a fiddle after a sausage sandwich.

I found this which also indicates it will work:

There are a lot of posts on how to get this up and running so rather than traipse through 100s of posts to piece it all together I’ll pull together here. It took a while to nut out some of the finer points so I hope this helps. There are appear to be two differing methods of using Roon with older streamers. Get a Rpi and Allo DAC or some derivation and use that as the end point. Use a method that creates an endpoint the bridges the Roon Raat protocol to something that the older streamers unde…

I do have a lot of players, some are Google Nest devices, some are TVs with Chromecast, a few Chromecast Audios, and each outbuilding has a Squeezebox driven sound-system of some sort)… oh, and I have teenagers.

OK, curiosity got the better of me!

I can now play internet radio from within Logitech Media Server to my NDS but initially found that my devices did not show up.

This was resolved by checking this box in the plugin settings and restarting.

Once I had done this then the players showed up thus so. 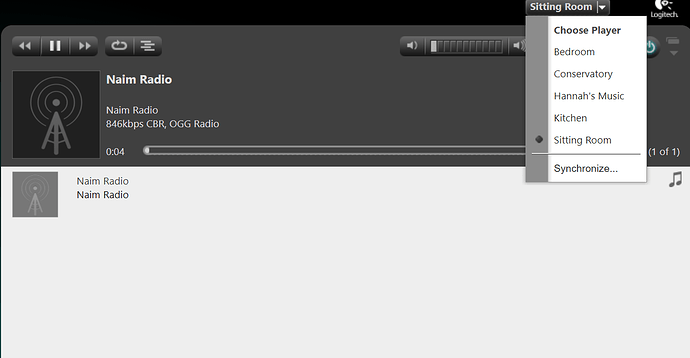 Thanks for that @trickydickie, but stopping the castbridge plugin, ticking that box and restarting did not add the NDX as a player LMS.

There are some things about what you’ve done that has confused me.
Why is your Naim device not listed in the LMS device drop down?
Why is it called Naim Radio in the main LMS screen?

In the NDX interface I have named the NDX as Lounge Hifi (and the Windows 10 UpNP library is named Music Server/Music). I only want to stream from LMS to the NDX… so basically the NDX becomes a dumb LMS player. For the life of me I can’t see how anything called ‘Naim Radio’ could fit this scenario.

My Naim NDS is called ‘Sitting Room’. If you refer to my screenshots you will see that the plugin discovered this device. When I enabled the option ‘Use LMS Interface and start from port’ and restarted the server (LMS) it appeared in LMS along with the other devices that I had enabled following discovery.

Naim Radio is the radio station I was using to test. I don’t have LMS pointed at a music library as I use Roon so I added the Naim Radio station in and managed to play it.