Urika -> Naim preamp: which IC do you use?

I’ve just plumped for Linn Silvers to connect my Urika1 to my 552, but wondering if I’ve made the wrong choice. Aside from the quality of the cable itself, there’s a compromise in having to either use an adapter to get the dual RCA plugs into the DIN on the pre, or use the phono inputs which are widely deemed inferior. Before choosing the Silvers I auditioned Chord Shawline, Epic and SarumT. The latter was superb, but is £2k. The others seemed to me to be merely different to the Silvers rather than better, though the Epic was a bit more refined and in my home system now I think that could be welcome.
My IC audition came towards the end of a long day of auditioning and I wonder now if I made the right choice. I’d be interested in hearing the experiences of others In finding their right choice to connect their phonostage, especially those using Urika1.

I’m about to audition the Epic (replacing Clearway) and SarumT for my P8/Aria/Nova/250RD…overkill for my meagre set up? We’ll see…

I use a phono to Din Naim grey/lavender interconnect. I took it along when Peter Swain fitted the Urika and he recommended it over the Linn silvers. It sounds very good to me but I haven’t had an opportunity to compare it with anything else. I do wonder about alternatives, so I will be interested to hear about others’ experiences.

@kjc my dealer fitted Cord Shawline RCA to DIN on recent fitting of Karsouel with Urilka, Radikal for my system 252/300

more than happy with the music, the deck now with Ulrika, Radikal & DVXX2 has a lovely almost netural musical presentation

I’m interested in this thread because I’m thinking of having the Artemiz on my Xerxes rewired but that begs the question about the Snaic between my SL and HC (hence my recent thread about Snaics), and the Lavender between HC and 282.

I’m thinking of having the Artemiz on my Xerxes rewired

Is that with Vertere cable? If so I’d be interested in knowing what difference you hear.

The Mayware converter has arrived, so keen to give this a listen later today as an alternative to running the Silvers into the phono sockets on input 8 of the 552 currently. I’m hearing a lovely sound, but it’s a bit warm and exaggerated in the upper Bass, which is causing smear and it’s losing definition and the silence between notes. A bit hashy.
I’m hoping this converter helps otherwise I may have to backtrack pronto and speak to Peter. Of course, the problem could lie elsewhere too, but I need to discuss that with him too of course… 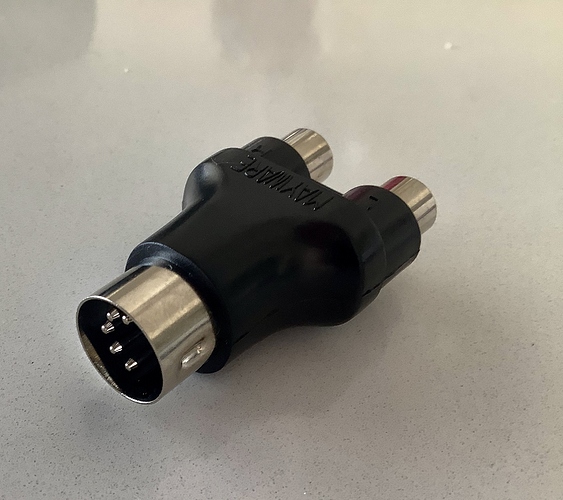 Slight topic deviation, is anyone using a Urika II either over Exakt or optical?
Reason for asking is I’m looking at that as an option for being able to relatively easily record/archive vinyl but the feeling is that having it as the main preamp swung under an LP12 is a sonic compromise?
Perhaps Urika and a digital recording capability further downstream is preferable.
Appreciate any insights or comparisons others may be able to offer here.

@Eoink. Quite possibly. Like you I have the Vertere SG PSU and like the look of the SG TT but it’s beyond me price wise and also is wider than the Xerxes so wouldn’t fit on the Fraim top shelf but the arm being rewired would be a considerable step. In due course I will discuss with Touraj.

I always felt like the Mayware converter was too compromising, and having the Sarum T replace it along with the Linn Silvers certainly opened up the floodgates for sheer enjoyable musical excellence.

If the budget doesn’t stretch to Sarum T i’d still go out of my way to be rid of the Mayware plug, fitting the naim lavender type phono - DIN leads would seem to be a very good affordable option here.

Yes, I am. I was quite happily using a Urika I - and I’ll come to the i/c journey - but did the comparison with a Urika II and found it, rather unexpectedly, to be a lot better so bought one. I should point out that I also use a KDSM Katalyst as my streamer so it was a straightforward change.

When I first had the Urika I, it was with Linn Silvers and a Mayware adapter, having established that the Din connection was very much better into my 552 than phonos. Nevertheless, I never got on well with the Silvers, which I found harsh and soulless and after 6 months demo’ed Sarum SA, which were a huge and immediate relief. These subsequently were replaced with Music, a balanced set, which were then “swapped” for a Music streaming cable when I got the Urika II. Music is sensational but I’d have no hesitation in recommending Sarum in place of the Silvers. Give yourself time to listen and see.

Appreciate the insight @Dave. In my case next in the chain would be a Linn Selekt DSM hence the question relative to Urika II and the relative merits vs a Urika with analogue outputs.

Thanks Debs. I fear you are right about the Mayware adapter. Apart from anything else, it’s a looseish fit on the Phonos and a very loose fit in the DIN socket. The weight of the Silvers almost pulls it out.
However, it does sound better than the phono sockets I must say.

Dave, Harsh and Soulless rings some bells with me, although it’s the cloying bloom in the upper bass that is my real beef. It’s spoiling resolution and stifling the recorded ambience and acoustic.

Oh dear, another long round trip to Leicester in the offing I guess

I fear I know where this may be going for me, but before I go bankrupt is anyone using and liking the Epic?

The bass bloom could be burn in related. I’d give it a few weeks to settle down.

I still think the Silvers are rubbish, though, sorry.

Slight topic deviation, is anyone using a Urika II either over Exakt or optical?

I’m using a Urika II in to my Akurate DS/3 Katalyst (so Exact) in to the Tuner input of the NAC52.

I am using Linn silvers from urika I straight into the 552 phono sockets.

I had urika II for about six months (with kds) but backed it out earlier this year. Back using urika I and with Karousel and a 552 it is substantially better than U II imho. I record to a tascam 3000-da Instead. But each to their own.

What specific aspects of the Urika II led you to take it out, was there a sense it was less organic and more digital in presentation for example?
Appreciate your thoughts.

Initially used the provided Linn rca cables into 252, tried an rca to din converter cable and was sufficiently interested to install a naim “lavender” rca-din I already had in a drawer. It stayed until I decided to upgrade to SL many years later. I would say go for an rca-din. If you can audition different options, great! If not go with a cable you know you like. (that’s what I did with the SL, I preferred it to other options in did-din using my cds3. No regrets!)