One of my rare entrances here

I am 66 years old, I use my ears when judging whether a hi-fi product is interesting to implement in my music-system.
This both in my 2-channel system and in my headphone-system.
I have never looked at measured values,.it is the hifi designer’s task during the design work…

I listen to the finished result and judge via my ears whether the hi-fi product adds better soundquality or not in my music-systems.
I am known for having music-systems that sound good,.and often give advice to others based on my listening experiences.
Is also quite often hired by others to install and optimize their music-system,.always with good results that are “only” based on listening…Not Measurement.

Now To the Topic of the Thread:

These USB-cables in the picture below.
I sent these around to 10 of my hifi-friends.
I did not tell them what they cost individually or my reviews of the cables.

All 10 hi-fi friends individually ranked the USB-cables based on their soundquality in exactly the same order as me.

The interesting thing is,.that all 10 also heard the difference between Vertere 1m and 2m.
Where all 10 thought Vertere 2m was better,.this in how it “held together” the musical flow ". 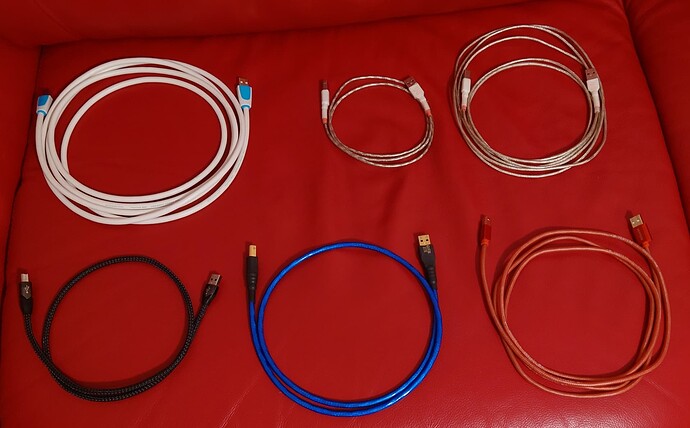 My experience with USB cable is rather limited as I only tried two “fancy” cables.

The Wireworld is slightly better than USB cables that came free in the box or £5 to 10 from Amazon. Almost negligible difference.

The Tellurium Q Ultra Silver is also slightly better than the Ultraviolet. An appreciable difference but not night and day.

The conclusion from my EXPERIENCE is the difference between USB cables is small. It is my OPINION that it’s not worth it to spend big money on USB cables. Power cords bring the largest difference in my experience, followed by speaker cables and interconnects. USB cable is at the bottom.

Never used USB for audio, Ethernet is another matter but that thread died a death.

Not tested different lengths of the same. From the above I’ve had experience with the Chord C (relatively neutral, flat), Nordost BH (darker and a bit closed in, less detailed), AQ Carbon (bright and edgy/tiring relative to the others). I liked none of these three in particular and ended up using a Chord Indigo.
All of the above tested between a Melco server and a couple of DACs previously, not using a USB A-B connection at present.
USB cables I’ve found to sound quite different and sensitive (noise?), and an easy way to adjust sound presentation depending on one’s system and preference.

Nothing to do with the subject you have posted about but just to say, nice to have you back.

In the past few months I have wondered what had happened to you as, when I joined the forum in mid 2019 you were a fairly regular poster.

I was going to ask French Rooster if he had any information about you as you both often contributed to the same threads.

Nice to know you are still ‘alive & kicking’ as we Brits say!

No experience with usb cables. But welcome back Peder

I imagine a USB cable being another component with its own electrical parameters in the chain. So it is (or should be) tested for compliance to the USB spec. However it seems there is another factor that is not defined clearly, a form of unwanted modulation (noise) as far as the DAC process is concerned.
If we assume this to be correct then this noise would be affected or shaped differently by-

I’ve noticed marginal difference in USB cables with lower end DACs. The higher end ones seem to better isolate from the effects of EMI.

The difference is far less than than that made by the USB protocol itself. For example, the contrast between standard audio ASIO USB versus newer Bulk Pet USB is very pronounced. Moreso than any cable difference I’ve heard.

Unless it’s the order you have bulleted them in I’d be interested to know the order in which they were rated.

I use a Chord C Stream USB cable 1.5m between my Melco and Moon Amp (on-board DAC). I read somewhere that 1.5m was the optimum length for USB cables.

I tried a cheap Lindy Red/Black before that - around £5. It was OK but clearly inferior to the Chord in every way. I’ve never been tempted to try anything fancier than the Chord C stream. It is based on the previous Chord Silver Plus, in fact Chord say it is an improved version of it. The Silver Plus was a very highly regarded cable that competed easily with very much more expensive ones. At least one H-Fi magazine had it as their reference cable.

In a review against the Chord Epic, which is much more expensive, the general conclusion was that the Epic really wasn’t much better and in some ways maybe not as good. It can happen like that sometimes. A manufacturer produces a superb entry-level product that really overshadows all their other products until you start paying very silly money.

May I ask how does the Wireworld Platinum 7 sound next to the other USB cables? Initially I was looking to get a used WW Platinum 7 but since no one was selling, I bought the Tellurium Q instead.

I preferred it to the AudioQuest. But I did discover that the equipment involved made a difference

Unless it’s the order you have bulleted them in I’d be interested to know the order in which they were rated.

It isn’t, unless best last, as the 2m Vertere was rated higher than the 1m.
It would also be interesting to know if comparisons were done by the rapid ‘Tune Dem’ approach of following a tune, or on extended listening, or if different people assessed differently.