For the past couple of years I have been playing hi-res and other music files (including loads of Dead/Goldfrapp live stuff) from my ancient MacBook Pro into the asynchronous DAC on an Oppo 205 via an Audioquest USB-USB B cable, and have been enjoying the results.

However, the Mac is dying and needs to be replaced this week. Apple in their infinite wisdom don’t seem to include legacy ports on their new machines, only Thunderbolts (is that what they’re called? I get confused) so I will have to get some sort of hub to connect all my old devices.

Prices for these hubs vary massively. My question is, are all these things the same? And do they make a difference to SQ? Or does someone do a good quality Thunderbolt to USB B cable?

It’s USB C on all the Macbooks now (as far as I know); two ports.

Apple sell an adapter from USB C to USB A socket which should just plug in and allow you to use existing cables. 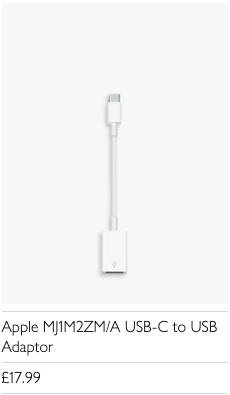 I can’t say whether it’s got any active components but I’m sure it’s got fewer than one of the multi-connection hubs.

Amazon (and others) have very cheap devices which look as if there is barely any roon (see what I did there?) for anything apart from connecting wires.

So I don’t think a hub is needed.

Thunderbolt and usb-c are almost the same, but there are some differences. If I recall correctly it’s mostly related to what video standards are supported, so if you want to hang anything other than the Oppo off an adapter, double check compatibility.

Thunderbolt and usb-c are almost the same, but there are some differences. If I recall correctly it’s mostly related to what video standards are supported, so if you want to hang anything other than the Oppo off an adapter, double check compatibility.

You learn something new every day. I’d thought thunderbolt was the mini-displayport connection but as you point out with thunderbolt 3 it uses the USB-C connector.

How about getting a Mac Mini which still has some useful USB ports?

New iPhones will not come with earphones or charging plugs - it’s ‘green’ apparently, now tell me the real reason for cost cutting and keeping prices high …

This enabled the MacBook to be much thinner and probably lighter which is no doubt an attractive proposition to some customers.
Once you have bought the correct socket you should be set up for a while.

Hi, yes its somewhat annoying you don’t get a legacy USB port in the new MacBookPros, along with an SD card reader like they used to, I dont really care how thin they are!

Anyway, I have a similar one to this on Amazon which works well on my MacPro - old type with Pci-e card, hope the link is ok 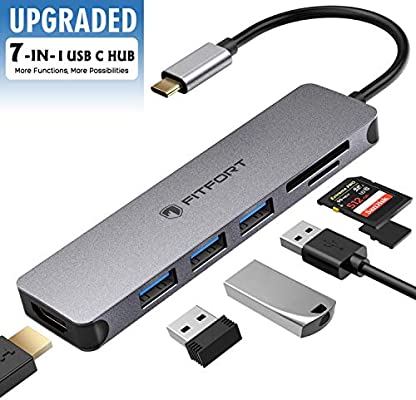 Thunderbolt controllers multiplex one or more individual data lanes from connected PCIe and display port devices for transmission via two duplex lanes. Thunderbolt 3 is an open standard developed by Intel / Apple and shares Type-C connectors with USB while requiring special active cables for maximum performance 20 Gbit/s or 2.5 Gb/s (USBc 3.2 gen 2.2) which cost a bit more but extremely versatile as most ports are available, video, network etc.
Edit: if you get an NVMe disc in a caddy for CCC backups etc, get one thats solidly made, to provide plenty of heatsink as they can get a tad warm from all those rapid transfers!

Take care with USB C to A adaptors as the 20V will destroy 5V devices! The genuine ones are a bit more but best for peace of mind.

or a CMP which has all sorts of ports!

Actually, the 2016 MBP was well equiped for ports, CinC has a later MBP and t’was slight annoyance having to buy extra leads and adaptor.

I have a 2015 MBP which had all the nice ports, unfortunatly I drowned it.

We have a very similar multi-port adaper for our newer Macs - they’re good but I’d prefer a chunkier Mac with native ports and I hate Apple’s awful dongles.

CMP = Classic Mac Pro - the cheese grater one
CinC = Commander in Chief (Nav)Home - Navy, home force. Otherwise known as Mrs NFG who has also been to sea on a submarine twice!
Sorry should have explained my TLAs!

I did a super mod to a '15 MBPro, fitted a 512Gb NVMe drive on an ultra thin adapter to the AHCi bus and wow, did it go! If you look at Macfinder .co .uk you might find a good S/H one?

I did a super mod to a '15 MBPro, fitted a 512Gb NVMe drive on an ultra thin adapter to the AHCi bus and wow, did it go! If you look at Macfinder .co .uk you might find a good S/H one?

Thought you may have meant a Classic Mac Pro.

I still have an 8 core 2008 cheese grater which was a superb machine just very power hungry. The ash-can Minis were a really poor evolution. The newest MPs are too expensive for me.

My 2012 i7 Mini does virtually all I need currently but will not (officially) support Big Sur.

I wholeheartedly agree and one mere upvote is just not enough.

SSDs rejuvenated my 2008 Mac Pro. I boot my 20212 Mini from a USB 3.o Samsung T5 external SSD - just works. Tempted by the current Mini but might wait for an ARM version.

The problem with fitting an SSD in a CMP disk tray is the Sata2 interface, whereas exploiting the Pci-e bus gives you max beans!

I shall screengrab for posterity!

Go to OWC website. You will find whatever you may need on a Mac