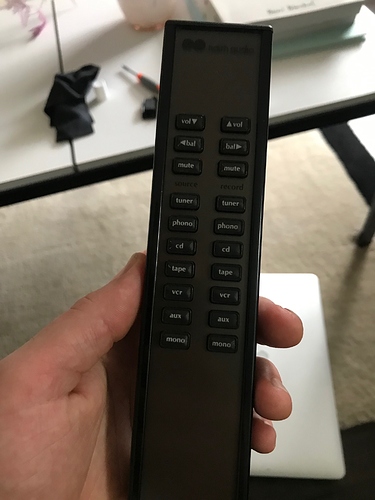 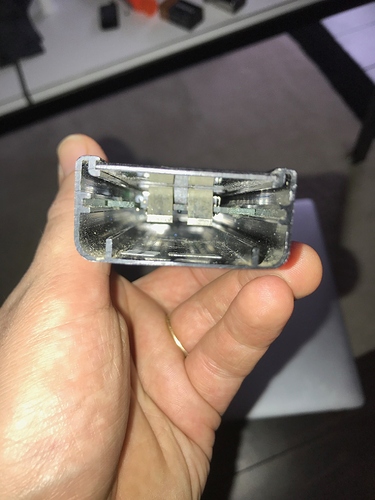 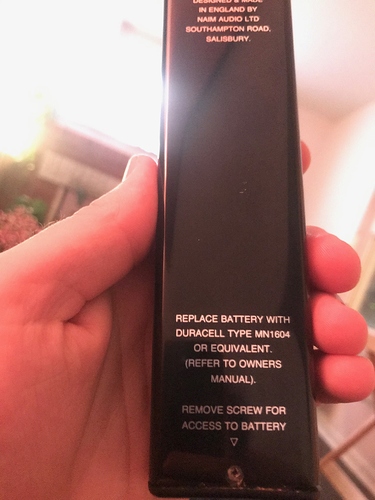 Hello everyone! I attached 3 images of a recently acquired very early very special naim remote. Works great with my nac82, but the button orientation is off from what’s on the 82 preamp. Anyone remember having one of these and if it’s possible to alter the buttons? Seems not too complicated of a design, but there’s just the one screw visible which opens the battery door. and other than that it looks pretty fixed. Original owner mentioned that he thinks he once changed them. So I think it’s possible. I don’t really wanna force anything around in case it would break. Love the look of this remote! Thanks everyone.

IIRC the labels in the little square boxes can just be levered out with and moved around. No electronic trickery involved at all!

Of course, my memory may be faulty, and I can’t be a*sed to get the box off the wardrobe to check. I’d have to go and look at the NAC52 remote now in the possession of my son-in-law.

The NAC52 came with a sheet of adhesive labels so you could re-label the source buttons on the pre-amp. Your best bet is to try to track down an old sheet - you could ring around some Naim dealers but may need to be patient!

Saw some on fleebay the other day …but someone wanted about £50 a sheet!!!

Not surprising, I recall that I paid well over thirty on fleabay for my sheet, and that was a couple of years ago.

The phrase “Rocking horse droppings…as rare as” springs to mind.

However I think the OP will have to change the remote to match the 82, especially for his phono boards on Input 1. I’m curious as to why the phono button is on input 2 (assuming I read the inputs in numerical order from top to bottom)…perhaps set up for a Stageline running off input 2a on a 52? Which could imply that the buttons are interchangeable.

Edit: just found a picture on t’interweb with a different button order, so it can be done.

If you are talking about the input buttons on the pre amp, then yes you can remove them from the front and change them. Its easy to do and uou just need some tape and a fine flat small screwdriver.

I don’t think I want to change the buttons on the pre amp, would rather switch them on the remote.
My 82 has phono boards in input 1 as suzywong mentioned. Thanks Suzy! The remote has tuner as the top input. Not ever going to be a tuner there. Unless it was a third party one. But not going to happen. Since the naim one uses DIN. Dungassin did you mean the buttons on the remote can be popped out?
Thanks for the replies everyone. Are these stickers that naim put out for the pre amp or the remote?? I’ll take a look around…

Char, the stickers that have been discussed herein are for the preamp (82, 52, 102 etc) If you want to have a look at yours on the 82, you can gently lever them off with, for example, the smallest “jeweller’s” type flat blade screwdriver, needle point tweezers, or even a pin. They will stick back down quite happily. They are flat, black with translucent lettering…so we can get those wonderful coloured displays when the lights are low! Love it!

I don’t have a remote like yours, but it looks to me like the buttons are “rounded” push fit covers, similar to those on a computer keyboard. If that is the case then they could be rearranged.

Of course the best people to ask would be the service department in Salisbury!

Service Dept. in Salisbury at your service!

Indeed, the decals on the front of the 52/82/102 can be removed & repositioned quite easily using the method described above.

The remote in the picture has already been altered, I think it should be phono, cd, tuner from the top.

Neil, thats so much for the reply,
The little buttons do indeed have movable stickers like the amp. Was able to move them no problem. All matched up now! It’s all in the details. - Char

he front of the 52/82/102 can be removed & repositioned quite easily using the method described above.

The remote in the picture has already been altered, I think it should be phono, cd, tuner from the top.

No probs. Glad you are happy!