AT637 stylus cleaner - I use sparingly as I am wary of damaging my aluminium stylus, which are prone to bending.

The above gives me silent playback for around 90% of my record collection, a mixture of new and second hand.

HumminGuru record cleaning machine
Nagaoka antistatic inner sleeves (not the cheapest but very worth it)
Carbon brush (the silver one that is available from a hundred brands, mine is from Pro-ject)
DS Audio ST-50 stylus cleaner (gel pad)
Digital gauge (I have a Rega Atlas but frankly all you need is the grey one for 6 euros that is available on Amazon with a hundred different brandings)

Wow!! Thanks to all who replied! This is exactly the sort of information I wanted! Some solid recommendations that I can look into and some options within each category!

I found the CF bristles would trap dust, which then wouldn’t release, such that one ended up using fingers et al to clean the fibres, which introduced potential contaminants on to the brush.

I find a quick wipe of the fibres on my jeans works a treat to lose the gunk on the fibres. It’s a tip I picked up from Peter @Cymbiosis . Seems crude, but works perfectly IME.

Checkout Blake Sleeves on YouTube, they are the best thing I’ve bought for my collection.

They have an adhesive flap on the back so you never need to remove / damage the album cover. I take all my inner sleeves and put them at the back of the Blake Sleeves with the slot facing upwards so all I ever take out is the physical records.

They are fantastic quality and really make the artwork pop.

They do sleeves for gatefolds and regular 12”. You need to order from Netherlands but they come super quick.

Stylus - nothing, Linn Green Paper or the Audio Technica AT637…?

Ditto - I use the AT once or twice a week and green paper before each side.

I don’t clean records. I just buy them in very good condition and look after them. Mind you, my systems are not high resolution by modern standards and I don’t have an expensive cartridge to protect. I couldn’t be bothered with a record cleaning machine either.

You can do as much or as little of all this as you like.

I have over 700 LPs, mostly bought in the 1980s and mostly second-hand. I am also more annoyed than many listeners by clicks. So I got a record cleaner and most records have been cleaned once in the last 6-7 years.

If the records were all new or if I had a few, I would not have bothered.

I use a gadget like those shown to clean the stylus every 100-200 plays or when I notice it sounds odd or apparently has a blue-bottle attached.

I use one of those dust removing brushes on an LP if I notice it’s dusty. I prefer doing that well before or just after playing, to avoid static electricity issues.

None here matches my choices exactly - we all make our own choices about what is too much bother, and I am sure you will end up doing the same.

None of this matters as much as finding music I like and listening to it as often as I can. After all, given a choice between a tatty copy of Kind of Blue or a pristine pressing of Celine Dion’s Greatest Hits…

Thank goodness. I was going to mention my cleaning the bristles this way, but balked at what I thought would be inevitable

I would definitely avoid fingers as the greases will stick to and build up over time on the fibres.

I usually use a little brush, the kind that used to be supplied with the big LP brushes back in the day that look like a sort of mini toothbrush with a single row of fairly stiff bristles.

I would definitely avoid fingers as the greases will stick to and build up over time on the fibres.

Hmmm, that’s interesting. I’ve been using my fingers after reading the below in this (The Analog Relax Record Brush﻿ - The Vinyl Press) article:

The instructions say you can clean the brush with your fingertips–– I asked Yurugi-san about the effect of any body oils on the brush bristles and was told:

Strictly speaking, skin oil may adhere to the tip of the fiber.
However, the amount was very small, I tested with thousands of
records, but there was no problem with skin oil. However, to customers who dislike using fingers, they could use a soft cloth.

Before I was using my jeans as suggested above, but at some point figure that who knows what’s on there. And then I read this and figured that at least I wash my hands regularly.

Maybe it’s specific to this brush

The brush mentioned I still mean to try some day.

I found the CF bristles would trap dust, which then wouldn’t release, such that one ended up using fingers et al to clean the fibres, which introduced potential contaminants on to the brush. After a while the CF bristles lost their vertical settings and/or started clumping.

Ok, so I have another fix for this. I have a Decca Brush - which is probably the original design of these. I think I need a picture here… 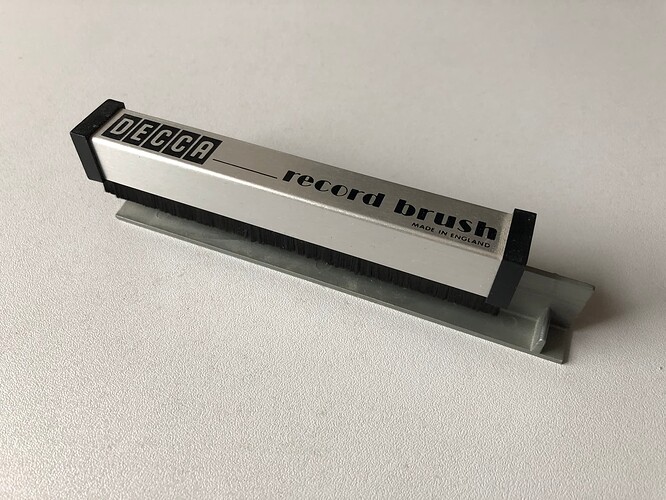 The clean the dust off the brush, you put it back on its stand and wizz it back & forth a couple of times… But - after a while, the bristles tend to get splayed out, laterally. To fix this, you take the brush off its stand and wipe the bristles cross wise. This will put them back in line.

I was shown this last trick by Derek Whittington formerly of Sound Advice, Loughborough.

Does it have bristles both sides?

IMV it’s a better product than the Hunt EDA and looks far more ‘idiot proof’ (where I fit in) in practical terms.

Does it have bristles both sides?

Looking at modern versions, the Project one seems most similar to the Decca…?

But - I see there is a modern version called the Deram Brush which is a single row. Hmmm… NOT the same.

Yes I think so - but as the aim is to use the fibres vertically and then the velvet to collect/lift the dust, I wondered if someone had made a one-sided version.

IMV, this would make the dust easier to lift away?? Just a thought.

There’s a ‘used’ Hunt EDA on a well-known auction site at the moment. Let’s just say, it looks very ‘used’.

I always found the the Decca Brush (original) just worked. There is another trick to minimising static. You try not to clean for too long then sweep the brush over the centre spindle.

Here’s a picture showing the 2 rows of CF’s: 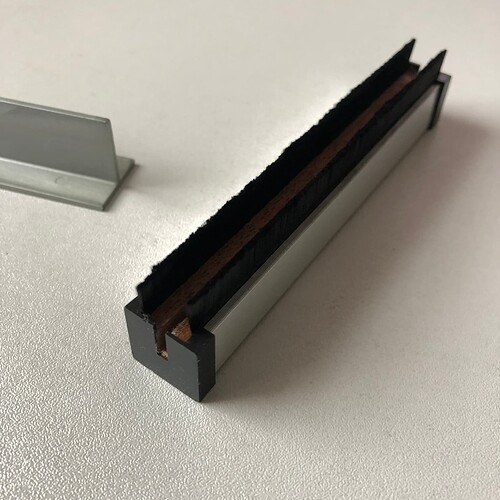 Conversely, I have an old and also a much more recent Decca 2+2 brush, and I didn’t really like either of them, so I guess much will depend on personal preference.