For the recent opening of Third Man Records in London some limited edition 7" singles where sold including this Paul Weller cover of Going To A Go Go there are at least 150 copies on eBay at the moment a yellow one sold yesterday for £600 and there is a bid of £1,000 for a copy of this and a Third Man Jack White 7".

Alternatively you can pick up a plain old black copy for a mere £90. 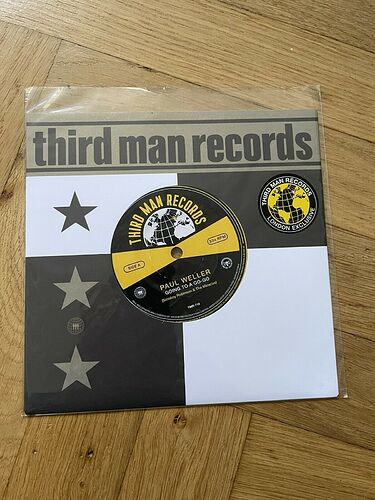 Blimey I bought the Weller black vinyl version for £6.99 from Resident records online!

I’m a huge Weller fan but wasn’t overly keen when I heard this cover on Chris Evans a while back so didn’t rush to buy it I’ve just looked on eBay and still bidding up to £64 for the black vinyl.

I was just thinking we hadn’t seen that much from you, especially in system pics , is it still the same passive pre-amp, Quad and NHS rack?

I’ve been here all along mostly over here in the music room. The NHS trolley is still here but my system has had a few changes from the Passive/Quad I went Quad Pre/Power then to a Hegel H190 which is a fantastic amp but I’m currently trying a Supernait 2 in my main system which I bought for a second system there is a thread of mine In Praise of the Supernait in Hifi Corner which details that.

Buying of recordings, whether vinyl, CD, downloads or other, for music listening and appreciation is completely different from the hobby of collecting. Of course with music many people combine the two, as the thread Large music collections - Why? demonstrates, though with different people the emphasis on one or other aspect may differ. Serious collectors are often prepared to may large amounts of money for rarities, or for every different release, etc. For musical enjoyment such extremes are rarely necessary, so, for example, the fancy coloured vinyl release is completely irrelevant (and sometimes poorer sound quality anyway!) so perhaps a question for any individual faced with an expensive record is: am I a collector, my collection benefitting from this, or am I a music listener, with this an important addition not available cheaper?

I suppose I fall somewhere in the middle because I wouldn’t buy a record I didn’t like for the sake of completing an artist’s discography or buy every Tone Poet regardless of my liking the music just to have the set.

I hope when I’m retired to listen to all of my collection A through to Z but even now that would take me about 2 months of non stop listening and at an hour a day almost 5 years so still a possibility but only just.