I’ve browsed charity shop vinyl sections for several decades, but it seems to be an increasingly fruitless chore.

They all seem to have loads of middle of the road ‘popular entertainment’ records from the 60s/70s most of us let alone anyone else would have little interest in.

Possibly discussed before but the charity shops potentially seem very skilled these days at sorting the wheat from the chaff in many areas and may well more professionally value items such as LPs and designer clothing etc than they used to.

You can’t blame them of course but the joy of finding an old LP you’d never bought on release (assuming you were born), or even later vinyl simply by browsing seems to be diminishing.

Admittedly we pay silly money for new vinyl releases and boxsets so perhaps shouldn’t really complain especially when we are hoping for a decent used LP for a few quid when others are there buying secondhand clothes etc to try to make ends meet.

Several possible factors may be at play:

Several possible factors may be at play:

When some showed great CD hauls at Poundland (from Music Magpie?) I was rather amazed that it was all mostly highly marmite commercial dross (admittedly I already had a few) - so either the supplier to Poundland was selective in what they sent them, or perhaps these were the mainstream titles they felt would most likely sell secondhand there?

I actually spoke to a Charity Shop manager and was told that most records are sorted through and sold to dealers or listed on eBay before hitting the shop floor. When I argued that Charity Shops should have a dual function supplying cheaper second hand goods to people who where not so well off whilst making money for a charity. She basically said that maximising profit for the Charity was more important than customer need on the shop floor.

Most people listen to middle of the road pop I’m afraid. As entertainment Music is a very late second to Eastenders to quite a majority unfortunately.

My wife runs a charity shop for the RSPCA and has recently put a sign in the window Vinyl wanted. Most of the people she has asking for vinyl are dealers looking for bargains to sell on.
I go through them first to make sure nothing is put out to cheap.
It is maximising profit for the charity shop. She had a collection dropped of the other week that was the usual Perry Como stuff but in amongst them was some 7” singles that as soon as I saw them I thought they might be worth a bit more then a pound a piece.
I was shocked when I checked them out on Discogs.
The icing on the cake was this 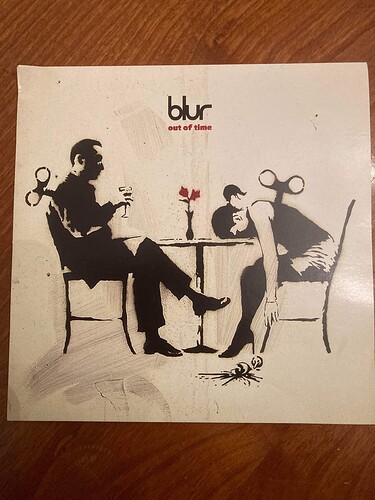 Which is as it should be, surely?

To answer your question yes of course that’s more important. Also I’ll explain I was in the shop donating records not buying.

How selling to a dealer rather than direct to a customer is maximizing profit I’m not sure I’d have thought the opposite was true. Different if you are paying normal business costs and taxes a quicker but smaller profit could be seen as better but not in the case of a charity shop.

Which is as it should be, surely?

It certainly seems to be the case these days, I don’t think it was quite the same 25-30 years ago but the larger charities in particular are run in a more ‘professional’ manner when it comes to assessing the value of donations. The downside of course is that if they sell on things of higher intrinsic value to maximise price, then what’s left in the store is likely to be poorer quality, whether it’s clothing, vinyl or whatever, and presumably the middle men who will sell on vinyl etc make profit again from the original donation.

Most people listen to middle of the road pop I’m afraid. As entertainment Music is a very late second to Eastenders to quite a majority unfortunately.

There are only so many Max Bygraves type LPs I can comfortably peruse without feeling unwell. Quite how I passed on a Shirley Bassey LP I don’t have I’ll never know.

I agree with the OP, our local charity shops aren’t great for records, however we do have a local record shop and he keeps his ‘unclassified’ (not priced yet) vinyl in big plastic storage tubs under the main racks, I’ve found some nice stuff in there and if pressed (pardon the pun) for a price on the spot he is usually quite generous.

Needless to say he discourages rummaging in the tubs!

A friend of mine buys lots of opera boxed vinyl sets from Oxfam. Many are nearly or completely mint. And he pays really quite low prices for top recordings.

The issue I have is that our local small town high street is now strewn with charity shops, i wouldn’t be surprised if they started to coach day trippers in to visit them soon.

The problem is they are nudging the other shops out, so I think that the charity shops should serve a useful local function, beyond suppling cheap teddy bears for my dogs who like them, shhh…don’t tell the charity shops I do this!

A friend of mine buys lots of opera boxed vinyl sets from Oxfam. Many are nearly or completely mint. And he pays really quite low prices for top recordings.

Trendy coffee shops spring up where you previously had bank branches. Although there are still many small independent grocery stores (often specialising in specific cultural foodstuffs), I can only think of one traditional butcher shop within a mile or so and I’m not sure they are as good as they used to be. Small Tesco/Sainsbury outlets everywhere. Still plenty of chemists/opticians/estate agents and so forth.

I think there’s still a lot of variety on the high street but for decades traditional stores unable to compete with online business are being replaced with charity shops etc.

The problem is they are nudging the other shops out,

Are they? Or are they simply taking up the Increasing number of vacant shops, the landlord glad to at least have somebody to rent the premises?

You may actually be suprised if you look into where your donated goods end up especially the clothes. We donate so much clothing that the Charity Shops just cannot process it and so it is bundled up and sold in weight.

These dealers then ship it out mainly to Africa where it is broken down into smaller weights and sold to market stall holders.

Charity is huge business nowadays where chief executives earn as much as those in banks I may be wrong but I think that the amount of cash that ends up actually in the charities hands is as little as 20%.

I like the challenge of trying to find an early pressing of a classic rock LP and then try to clean it and bring to life! I’ve had a few successes.

more of the ‘middle of the road pop’ was probably sold

Or not sold!
Always seems to be many “new” copies of the same albums.