Running from Saturday August 24th to Sunday September 15th 2019
The Vuelta will be made up of 21 stages and will cover a total distance of 3272,2 kilometres.

(The rider start list is still ‘provisional’ or incomplete, and subject to change…)

Thanks, I have started to appreciate the type of race the Vuelta is lately, perhaps also influenced by my Spanish girlfriend

I’m a little surprised of the Yates absence in the Mitchelton-Scott ‘confirmed’ team line up : /

Primož Roglic could be a prime contender for Team Jumbo-Visma, he finished this years Giro 3rd on the podium.

Movistar, despite the absence of Mikel Landa [who is Spanish], the inclusion of Richard Carapaz, who won the Giro earlier this year, with Amador, Valverde, and Quintana, are sporting a very strong team, and all excellent climbers.

Team Ineos playing their cards close to their chest, we will find out very soon : )

Can’t believe Doumolan is not competing as his injury didn’t seem so severe or really bad at the time and he would of had over two months of recovery as well since it happened. Must be much more serious than he was letting on!

The occupational hazard of cycle racing, on one hand these guys are among the fittest athletes on the planet, but cyclists can so easily get knobled in a crash.
I wish crashes didn’t happen so often, it’s not that they have any protection wearing lycra.

Meanwhile, Tom Dumoulin isn’t only out for the rest of the season due to his knee injury, but he’s unhappy in the Sunweb team which he’s contracted to be with until 2021. He wants to move to Jumbo-Visma.

Alongside the Dutch national coach's doubts over his fitness for the Worlds, it's likely Dumoulin's racing in 2019 is over

Hey! Maybe team Ineos wil take him for next season then they’ll have 5 potential leaders/tour winners all vying and competing to be the leader. Carapaz, Thomas, Bernal, Froome and Dumoulin. As it is there’s only four potential leaders for next years tour!!!

I don’t think and hope so, even a move to Jumbo Vista might be interesting with two other strong riders already in the team… 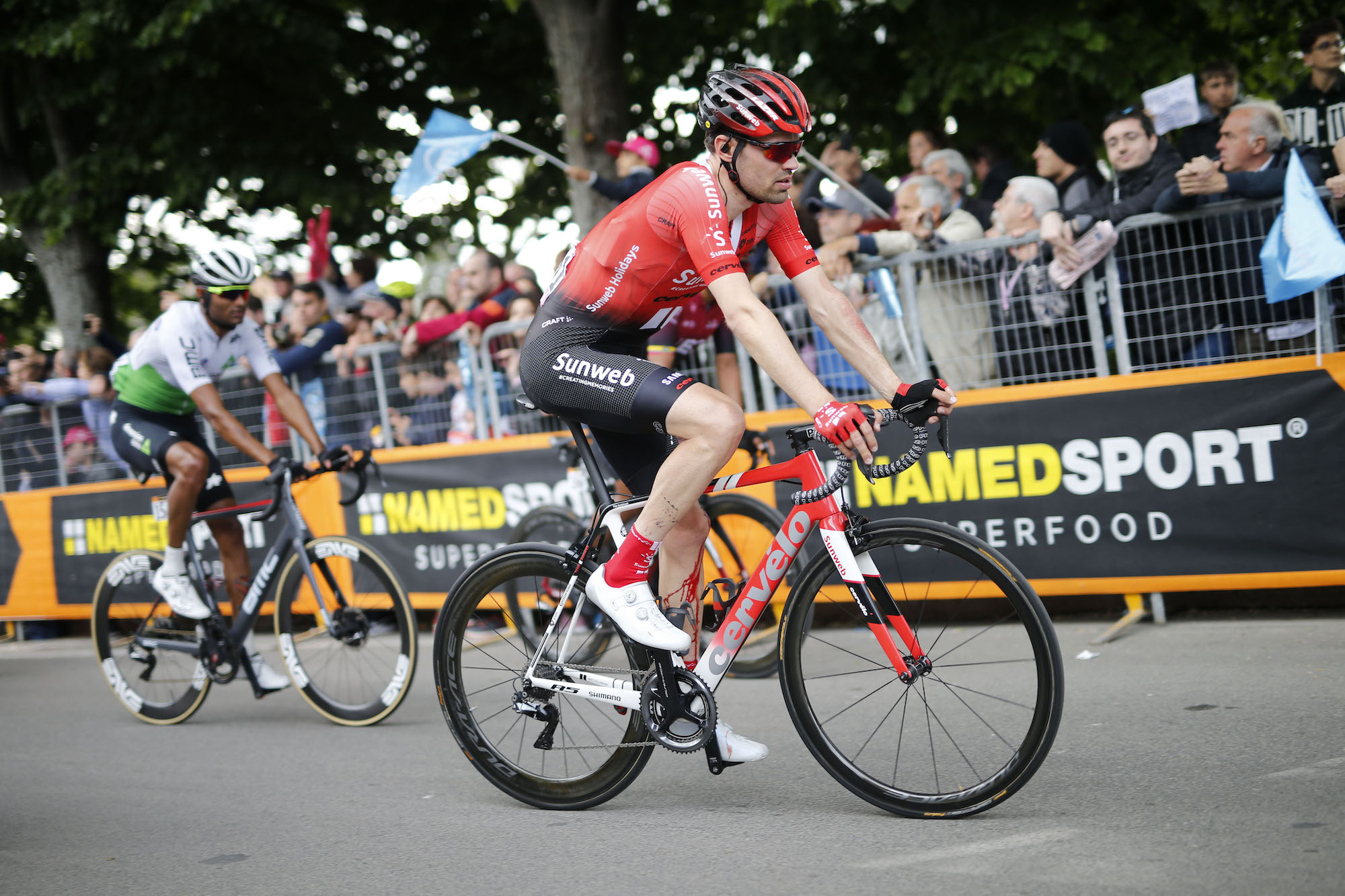 Jumbo-Visma have quietly confirmed the signing of Tom Dumoulin, after the Dutch star ended his contract with Sunweb.

UK freeview cheapskates will only see an hour of the highlights on ITV4 each day in the evenings,
and a repeat showing each following morning.

Live coverage is on Eurosport 1

I’m thinking of subscribing to Eurosport just for one month [to cover la Vuelta] and costs £6.99, which is not so bad for HD viewing and maybe no advertisements (?)
But dunno if the subscribing process is easy?
do they send you a card to slot in the back of the telly?

If it’s satellite (?) then it’s no good for me, only have a digital aerial transmission : /

How’s your broadband connection? I get most of my tele via streaming these days and a quick Google shows a lot of options for Eurosport - some of which may even be legal!

Too slow around here : (

Truth be known i ought to dump BT Broadbent, and get a satellite connection,
but for live coverage la Vuelta i could do with a simply quick fix : )

We get Eurosport HD through BTSport. I think it’s a supplementary package?

Now the question is if the other change because of that, Steven Kruiswijk…, will he accept to be the 2nd card or will he want to leave…

We will need to wait until next year to find out what with Tom’s knee injury.
But it does seem to be the trend to have more than one top guy in the team capable of winning on general classification. They’ve probably come to realise the unpredictable can and does happen, not only with crashes but having a day inexplicably off form or even inexplicably on form, so why not have two or even three guys who are capable, and this also plays into the trendy tactic of confusion the opposition by sending one or other up the road to share the pressure, doing the old one-two.

It was tongue in cheek as team Ineos will already have more than enough on their plate regarding who’s gonna be the leader at next years tour de france.

I think he’ll have to as i just don’t think he’s good enough to win a grand rour unlike Tom who has already done and is more than capable of winning the tour next year. There’s no doubt that Tom will need super domestiques to challenge the mighty firepower of team Ineos next year!

Yeah I think the problem of the Dutch riders in general is that they are very strong to follow and stay on track, but miss the power to have a quick acceleration away from the component. So they rely on not making a mistaking and hoping to crack the component in the long run. Guys like Bernal also have the additional punch to make a difference. Tom has as the exception of the rule become better at it all, but still only has the time trial as the ultimate weapon…, so let’s see what happens. It should be exciting in the coming season with so many great contenders back on their bikes.

It will be interesting to see what Prudhomme does with the parcours. Assuming Froome is back then Ineos will have cover in the event of either a route with a fair few kms of TT (Froome) or not many at all (Bernal). After this year PInot will be a challenger so I suspect the TT kms will be small.

Team Ineos reveal line-up for the Vuelta a España 2019