A neighbour owns a MK7 GTI Golf which he’s had from new and is about 8 years old. He’s always had it serviced at the main dealership he got it from and he bought continued extended warranty after the initial factory warranty expired.

Recently he noticed the heating system wasn’t working properly, with little or no heat available. The same dealer has checked it over and declared there is a blockage in the heating matrix - they say due to a ‘foreign body’, and are refusing to replace the matrix under warranty. They have flagged up a paragraph in the warranty booklet that states they are not liable for failure where there is a ‘foreign body’ in the engine coolant.

To be clear, he has never needed to even open the coolant header tank, never mind add any coolant - that’s always been handled by the dealer. So my thoughts are that if a ‘foreign body’ has caused the problem, surely that must be due to an issue within the engine cooling system (corrosion or whatever) and is therefore a design or compatibility issue. In other words VW should be liable for the repair.

Any thoughts how to resolve the impasse ?

Can he get an opinion from another registered dealer?

Sounds very odd but if there’s an exclusion in the booklet it must be something VW are aware of - ‘foreign body’ sounds odd however as no one is going to put a foreign body in the cooling system which would imply either some sort of organic matter blocking it or a part of the system which has worn/broken in the system internals and caused the blockage. Could it just be some kind of pump that’s failed?

First obvious question I’d be asking is what is the foreign body and can I have a look at it.

I just got my VW lease car back from MOT. I had tyres replaced under the maintenance component of the contract some weeks ago and driving seemed very ‘floaty’ when cornening. They could not obtain the specified Continental tyres and had agreed a different brand with VWFS. I noticed wheels had swapped positions (I’d damaged the alloy on the front nearside) and asked for the front wheels to be swapped back today. It’s much better now with far more positive steering. Odd. Steering column seems ot have less play.

I’ve got a funny feeling I may have had a heating failure on an older Golf or Polo - can’t for the life of me remember what the issue was.

Mrs AC’s polo cost us hundreds to sort the heating system over 20 years ago as one of the knobs controlling the system snapped just out of warranty and it was apparently a very labour intensive fix - I think these days I’d have argued under consumer law that the part did not laast as long a one would reasonably expect, perhaps greener then.

Any thoughts how to resolve the impasse ?

Makes no (engineering) sense. There cannot be a Foreign Body if the system has never been touched.

Your Neighbour needs to push back - hard - at the Dealership and/or VW.

The foreign body is almost certainly from the bag that sits in the expansion tank. I ‘think’ it contains material to absorb water. The foreign matter clogs the heater matrix.
Tell your neighbour to do a quick search on the internet. It’s a horrendous job to sort properly, time consuming and expensive.

I can’t remember the position with regards to warranty or VW/dealer assistance.

Some owners have had some luck back-flushing the cooling system.

Good luck to your neighbour.

Extended warranties may buy peace of mind. Right up until you need to make a claim.
Problem here, is your friend proving it can’t be his fault rather than proving it’s VWs. Hence the impasse.
To try and prove the issue is VW’s properly will take time, effort and money.

Instead, go straight to VW customer service UK and lodge a complaint. Explain that you have lost faith in the brand and were considering a new VW. That should grab their attention. Let them work the dealer, not your friend.

I had a parking sensor issue within days of getting a VW lease car - the VW forums out there were really useful, and the OP’s friend might well find useful info on those.

Thanks very much for the replies so far and keep them coming. A lot seems to hinge on the definition of what a ‘foreign body’ is. Seems like a get out of jail type coverall to me.

I’m leaning towards the wise words of @Thegreatroberto

I think my neighbour (and friend) needs to bypass the monkey and start talking to the organ grinder.

I have had 2 successful “claims” with VAG. One with VW, the 2nd with Audi. In reality same customer service team.
The Audi was fun. You have to be tenacious though. The paint on my front and rear bumpers of my pre owned A6 were delaminating. I recorded the issue with my local dealer well inside the 3 year paint warranty period.
Lots of excuses, then engaged with Audi customer services. Who just told me what my local dealer in East Kent did.
Anyway, I took photos and offered my version of what had happened. And made a pest of myself to customer services. After 6 months , they agreed with my view and repainted both bumpers.
I insisted on reviewing the dealership’s quality arrangements too. Noting that they had no minimum air or metal temperatures specified before applying the paint. Almost suggesting I was an expert.
They told me, that taking the bumper off and striping it was a 3hr job. Same to put back on. Plus the actual surface preparation time. I can see why they didn’t want to pay for this job.
Teach them to mess me about.
Doubt I’m welcome back to buy a car from them again!

How has your neighbor liked driving the GTI MK7? The GTI MK8 was just released here in the States and I’m considering one once the lease to my Passat is up but all the disheartening reviews stating the disappearance of buttons and dials anywhere on the consoles leave me discouraged…maybe I’m better off finding a s/h MK7.5.

Apart from the heater problem he’s had very little trouble and still enjoys driving it. It’s a DSG Performance model. My daughter in law also drives a MK7 manual GTI and it’s been a reliable car too. I even ended up being impressed enough by their experience to get myself a 7.5 Performance a couple of years ago. No regrets so far. 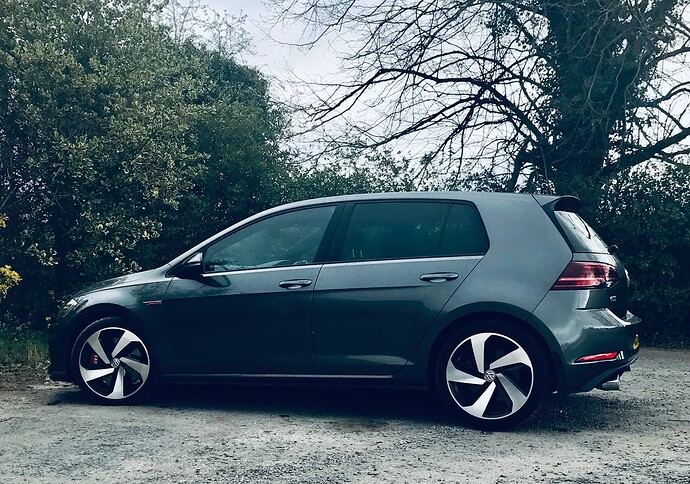