I have just changed the ceiling light in the lounge but the LED bulbs do not work well with the dimmer switch currently installed. I am looking for a dimmer switch that is compatible for use with LED bulbs. Can anyone advise a compatible make as all dimmers switches are not made the same. Any electrical engineer or ‘sparky’ advise would be appreciated.

Not are all LED bulbs dimmable, most are now, but not all…as we initially found out with ours… 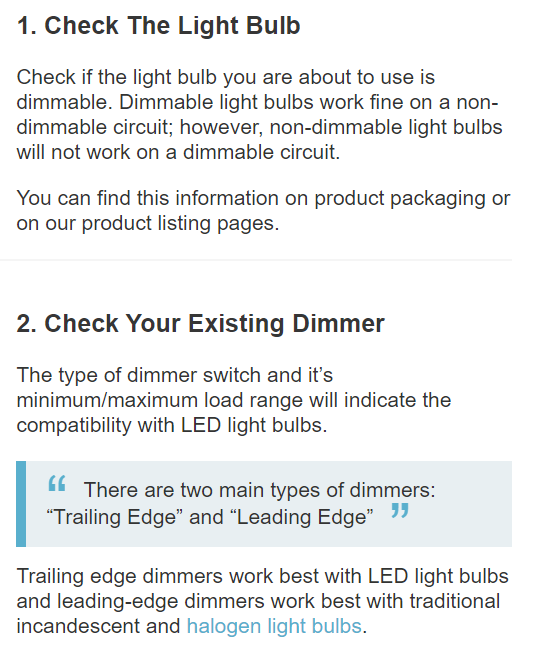 I have LED lighting in most rooms & have them controlled by MK ‘Logic Plus’ dimmer switches.
They are available as single or double gang units.

The trailing edge/leading edge point is the most important, and of course using bulbs that are labelled as dimmable.

You need a degree in electrical engineering to buy new bulbs these days… What are leading edge and trailing edge dimmer switches?
I’m having similar problems at home.

Thanks for your replies so far guys. Education appreciated, the bulbs are labeled as dimmers so need to procure new dimmer switch.

If you look for dimmers said to be suitable for LEDs, you should be ok.

Dimmer switches are soooh 2010’s, technology has moved on.

Buy a 3 Step dimmable bulb and use a conventional on/off switch. 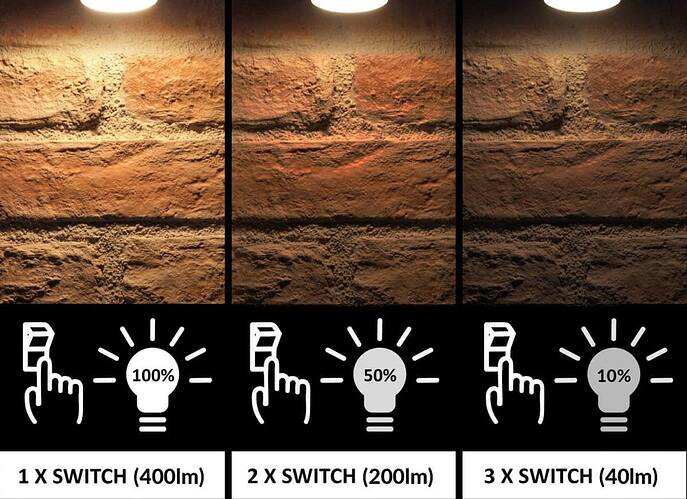 We have a number of ‘app/remote’ controlled LEDs that not only dim, but change colour, etc…pretty inexpensive…

Have you already unknowingly purchased a 3 step dimmable bulb? Given your bulb doesn’t work with a dimmer.

Hi Fatcat, the bulbs clearly state dimmable on the packaging.

A three step dimmable bulb is dimmable. It will say dimmable on the packaging. But it is controlled by a simple on/off switch.

It’s the wrong dimmer he’s using, is all.

But if he’s bought a step dimmable bulb, which are quite common, (even ASDA sell them) he will not need a dimmer switch; he will need an on/off switch to control it.

Before he buys another dimmer, Ted needs to check what type of bulb he has. Simple.

Fatcat, I have checked the bulb spec, it is not a step dimmable.

If you want to successfully dim LEDs and have no issues then always go for a trailing edge dimmer. What’s that you say? It’s easier than it sounds, mains AC voltage is a sine wave and dimmers work by chopping it up a bit so there is less on time and more off time. Overall the less on time you have the dimmer the lamp.

In a leading edge dimmer the front of the sine wave is chopped to 0v, so you get nothing, nothing, nothing and then wallop the voltage is switched on and cuts in with a bang as the sine wave is already “high”. LEDs react fast, light up quick and as a result they flicker. They also don’t like it and fail. By comparison the traditional resistive incandescent lamp naturally smooths the switch on impact and works just fine.

In a trailing edge dimmer the sine wave ramps up normally which is naturally slow, then the voltage is simply dropped to 0v. So, ramp up, up, up and off. The LED just powers down (very briefly) and then the sine wave builds slowly again and safely. No flicker and the LED does not fail.

Surprisingly few suppliers have good true trailing edge dimmers and they are always expensive. Varilight do a few as do Schneider. I’m sure there are others though if you hunt around. I generally use the Schneider.

Ummmm…. I have to ask what a dimmer switch and dimmable bulb will do to the audio quality of one’s Naim system in the same room or same house? In case that matters, of course.

In my experience, although LED do emit some RF noise, detectable on a portable AM/SW radio held close to the item, modern & better quality designs are significantly less & the same applies to dimmer switches.
As for affecting the SQ of audio play, I cannot detect any change between lighting on or off.
And I have a house full of LED & dimmers.

Just bear in mind this sort of dimming can create significant harmonics in and around nearby mains wiring… just like cheap SMPS.
Mains harmonics and high end audio equipment are not always good bed fellows.
So best ensure dimmers used are of high quality and very well electrically filtered.

I use Philips devices and have experienced no noticeable side effects in my audio setup… but replaced my previous no name kitchen lightning that was noticeable (brought a very slight grit and lack of feel on my Naim equipment).

As Mike says use an AM radio (on SW or MW) not tuned to a station, placed reasonably close to mains wiring and you will hear the radiated noise from any high frequency harmonics that may have been generated in the mains wiring. Note the radio must be on AM not FM