Watching the tennis, is the Worldwide Covid pandemic over?

Yes indeed, all these crowds make me feel nervous & fearful of the consequences.
However Wimbledon is a Gov approved covid control test & as such admission is very strictly controlled
You need to show …
Full vaccination (1st & 2nd dose) & 14 days after 2nd dose
Or a negative lateral flow test taken within 48 hours
Or English residents show a positive PCR test within the last six months.

That aside, I have serious doubts that UK Gov plans for release it all on 19-July will be successful long term. Looking at the exponential increases all over the country & the mayhem that surrounds the various uncontrolled mass group gatherings (for the football - as an e.g.).
I understand & agree we need to live with this thing, but its needs everyone to have antibodies (vaccine or post infection) for that to work.
Then the question about covid in the environment, will that allow another variant & the risk that it could find a way past the antibodies.
Time will tell, I just hope my fears prove unfounded.

Doesn’t seem to a pilot event, just a full on, all seats sold, full capacity, “we’re back to normal” statement, regardless of whatever is going on with the Delta variant.
It does not provide a good example to those who are not fully vaccinated, that this level of mass attendance is the norm.

Cases will proliferate, new variants will arise, deaths will ensue and we’ll be in a third wave. It need not have been like this.

Well it is a ‘thing’ but it probably requires over 80% population immunity (via vaccination or infection) before spread is naturally curtailed. That is population of all ages, and consistently across the regions.

A high bar, and one that assumes no true ‘escape’ variant.

I don’t normally contribute to Covid threads but I am seeing a real psychological change in our vaccine clinics (people abusing us for not giving their jabs earlier than the proper interval so they can go on holiday for example) and in public attitudes just in the last week or so.

I am not optimistic. People have lost patience. I am sorry to predict a bad autumn and winter. Hope I am wrong.

It is indeed a thing @BruceW but not where vaccines don’t have 100% effacacy and infection doesn’t prevent further infection.

I very much doubt you are wrong about what is coming.

It still applies even with those factors but we only have estimates of the level of population immunity required to reduce the susceptible population pool sufficiently to curb natural spread.

No vaccine or any intervention is ever 100% effective, for anything of course, and herd immunity does not mean that wild infections cease.

Before this thread gathers any pace, I will warn members that any deviation into politics will see this thread removed post haste. I’ve already had to make one or two edits…

As a Brit, I am amazed that people want to attend such events, but they do and it is people from all sectors of society, all ages and all political allegiances.

Sadly, the rise in cases and now hospital admissions shows that the population hasn’t learnt the lessons of the last 18 months, that many other nations seem to have done. It is not when this wave starts but how long it will go on for that many are now asking, whilst hunkering down at home as much as possible and hoping their loved ones come through unscathed.

So here in the Netherlands most restrictions got dropped on the 26th of June.

Yesterday a lot of the restrictions got put back as there was about a 2000% increase in daily infections.

What was promising to be a summer almost back to normal has become summer 2020 Lite edition.

There will be a lot of crowded gatherings related to the football tonight. That will help things along nicely.

It makes me very sad to read your comments on how badly some people are behaving in vaccine clinics. What the hell is up with these people - NHS staff and the army of volunteers are trying to protect people and the last thing they need is abuse. Unfortunately bad behavior and lack of respect to others seems to be the other pandemic that is spreading quickly in the UK. (also ref news reports last week about the massive rise in abuse against shop workers over the last 5 - 10 years).

Cases will proliferate, new variants will arise, deaths will ensue and we’ll be in a third wave. It need not have been like this.

That aside, I have serious doubts that UK Gov plans for release it all on 19-July will be successful long term. Looking at the exponential increases all over the country & the mayhem that surrounds the various uncontrolled mass group gatherings (for the football - as an e.g.).

Unfortunately I agree with you. The three observations I have:
A) early and limited data is showing at least for the Pfizer vaccine has a 6 month effectiveness before it starts to decline its protection. Fingers crossed subsequent data makes that less depressing.
B) with so much increasing infection in the population the chances of a new more potent variant increases
C) with much of the population now having depressed ‘flu antibodies, this autumn, winter could see significant hybrid infections (‘flu and Covid)

Unfortunately I agree with you. …
… early and limited data is showing at least for the Pfizer vaccine has a 6 month effectiveness before it starts to decline its protection. Fingers crossed subsequent data makes that less depressing.

I was speaking with my GP over the weekend - he’s deputy chair of JCVI & is on TV regularly - over just that subject & the need for regular boosters.
He pointed me at new info released last week … “Pfizer announced that it will seek FDA authorization for a booster shot of its COVID-19 vaccine as the company acknowledges its two-dose vaccine has shown waning effectiveness against the Delta variant.
… efficacy in preventing both infection and symptomatic disease has declined six months post-vaccination, although efficacy in preventing serious illnesses remains high”.

I attended a funeral last week. Half the congregation wore no masks, mingled, hugged, sat close together and at the prompting of the vicar sung at the tops of their voices. The other half of the congregation remained masked and winced. I have since tested negative but it was this event that prompted me to get tested.

Post my negative test I met up, masked and outdoors, with a friend who is unwell and at a higher than average risk. We were both fully vaccinated and allowed to meet under the prevailing guidelines. We were surrounded by a 50/50 mix of masked, circumspect people, and unmasked people showing no tendency to social distance. I even saw someone licking their fingers to count money.

Another surge is certain. Regardless of the efficacy of vaccines in the short and medium terms, a tipping point will (or will not) be reached if the delta and other variants make enough people sick enough to overwhelm the NHS. You could argue that it’s overwhelmed already, but only queuing ambulances and overflow morgues will trip the switch. We’ve always hankered after a heard immunity ASAP model in the UK and it looks like this time we’re going to get one, come what may.

How long will it take for heard immunity to kick in?
A high vaccination rate doesn’t equate to low infection rates and vice versa. 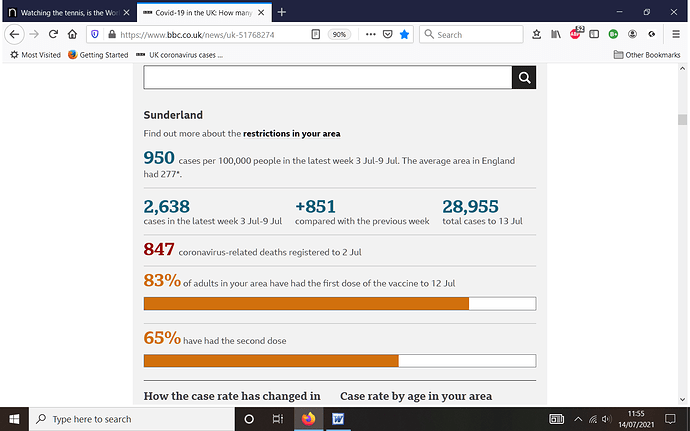 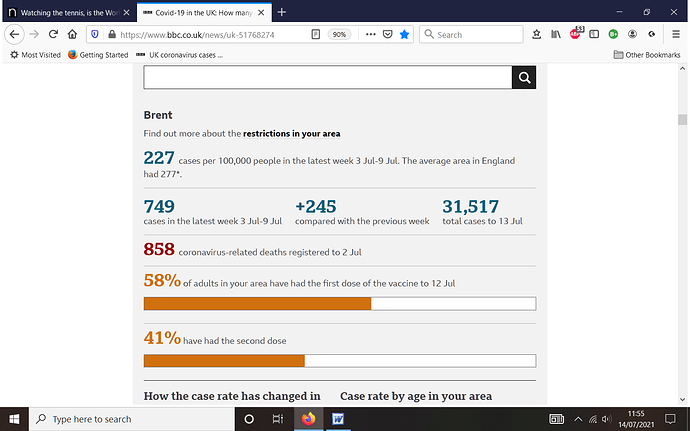